There are reports from Chile that Puyehue-Cordón Caulle has erupted and produced a large plume. ‘Just after 14:40,′ reports soychile.cl, ‘a huge plume began to be visible from the district of Entre Lagos, which corresponds to the beginning of eruptive activity at Puyehue volcano’.

The Los Ríos regional government has confirmed that the eruption has begun, with ‘a strong smell of sulfur and ashes’ being discernible in the area of the volcano. The state emergencies office ONEMI has also confirmed that an eruption is under way. Buenos Aires VAAC has issued a Volcanic Ash Advisory for the eruption reporting ash from the plume at 10 km altitude (FL350, 35,000 feet a.s.l.). The ash is moving south-east, into Argentina. (TheVolcanismBlog) 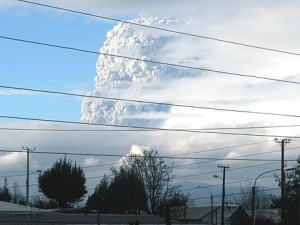 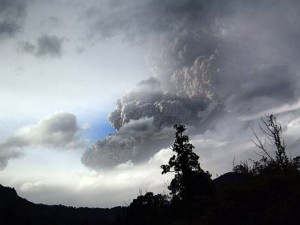 A volcano dormant for decades erupted in south-central Chile Saturday, belching ash over 6 miles into the sky. The government said it was evacuating 3,500 people from the surrounding area as a precaution. The eruption in the Puyehue-Cordon Caulle volcanic chain, about 575 miles south of the capital, Santiago, also prompted Chilean authorities to shut a heavily traveled border crossing into Argentina.

Winds fanned the ash toward neighboring Argentina, darkening the sky in the ski resort city of San Carlos de Bariloche, a government official there said, adding the city's airport had been closed. 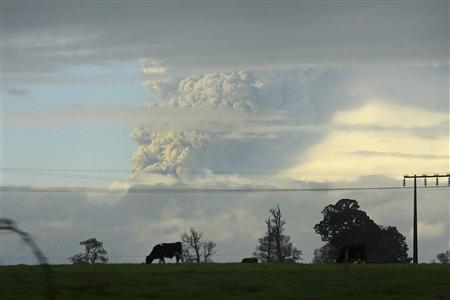 It was not immediately clear which of the chain's four volcanoes had erupted because of ash cover and weather conditions. The chain last saw a major eruption in 1960. Local media said the smell of sulfur hung in the air and there was constant seismic activity. It was the latest in a series of volcanic eruptions in Chile in recent years.

Chile's chain of about 2,000 volcanoes is the world's second largest after Indonesia. Some 50 to 60 are on record as having erupted, and 500 are potentially active. 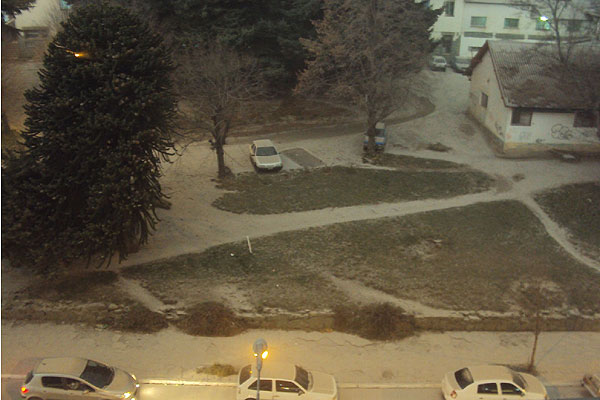 Chile's Chaiten volcano erupted spectacularly in 2008 for the first time in thousands of years, spewing molten rock and a vast cloud of ash that reached the stratosphere. The ash also swelled a nearby river and ravaged a nearby town of the same name. The ash cloud from Chaiten coated towns in Argentina and was visible from space. 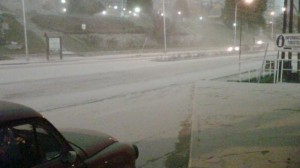 Volcanism of Chile is a continuous process that has a strong influence on Chilean landscape, geology, economy and society. Volcanism constantly renews the Chilean landscape with lava flows, lava plateaus, lava domes, cinder cones, stratovolcanoes, shield volcanoes, submarine volcanoes, calderas, diatremes, and maars. However volcanism in Chile as well as in other parts of the world is also associated with several natural hazards such as lahars, earthquakes, pyroclastic flows, toxic gases and ash. Continental Chile has a high concentration of active volcanoes due to its location along the Peru-Chile Trench, a subduction zone where the Nazca and Antarctic Plates are driven beneath the South American Plate. Chile has been subject to volcanism since at least late Paleozoic when subduction along the western margin of South America began. Easter Island, Juan Fernández Islands and other oceanic islands of Chile are extinct volcanoes created by hotspots. Chile has about 500 volcanoes considered active, 60 of which have had recorded eruptions in the last 450 years. The volcanoes with most recorded eruptions are: 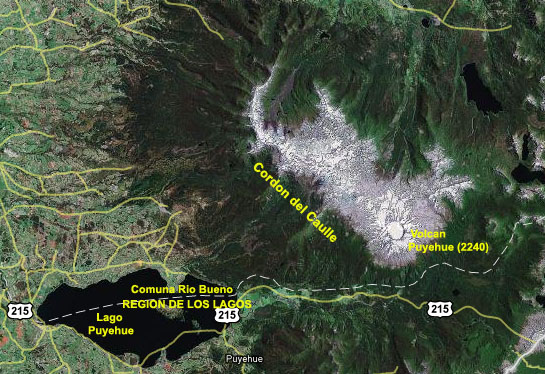 The Geology of Chile is mainly a product of the Andean and preceding orogenies which are caused by the long-lived convergent boundary at South America's western coast. While in the Paleozoic and Precambrian this boundary was affected by the accretion of terranes and microcontinents it has since then developed into a pure subduction zone. The subduction have shaped four features parallel to its strike; the Andes, the Intermediate Depression which is a graben and foreland basin, the Coast Range which is an accretionary wedge and horst and the Peru-Chile Trench off the coast. As Chile lies in an active continental margin, it host a large number of subduction volcanoes and nearly all of the territory of Chile is subject to earthquakes arising from strains in the subducting Nazca and Antarctic Plates or shallow strike-slip faults.

Mineral resources in the northern regions of Chile have since late 19th century made up the bulk of the country's export and state income. Chile is currently a leading producer of copper, lithium and molybdenum. Much of the countries mineral wealth have accumulated thanks to long-lived volcanic and magmatic activity as well as the extreme aridity that have prevailed over Atacama Desert for millions of years.

The Chilean territories of Easter Island, and Juan Fernández Archipelago are extinct volcanic hotspot islands in the eastward moving Nazca plate. The Antarctic Peninsula, claimed as part of the Chilean Antarctic Territory, shares a series of characteristics with the southern Andes. 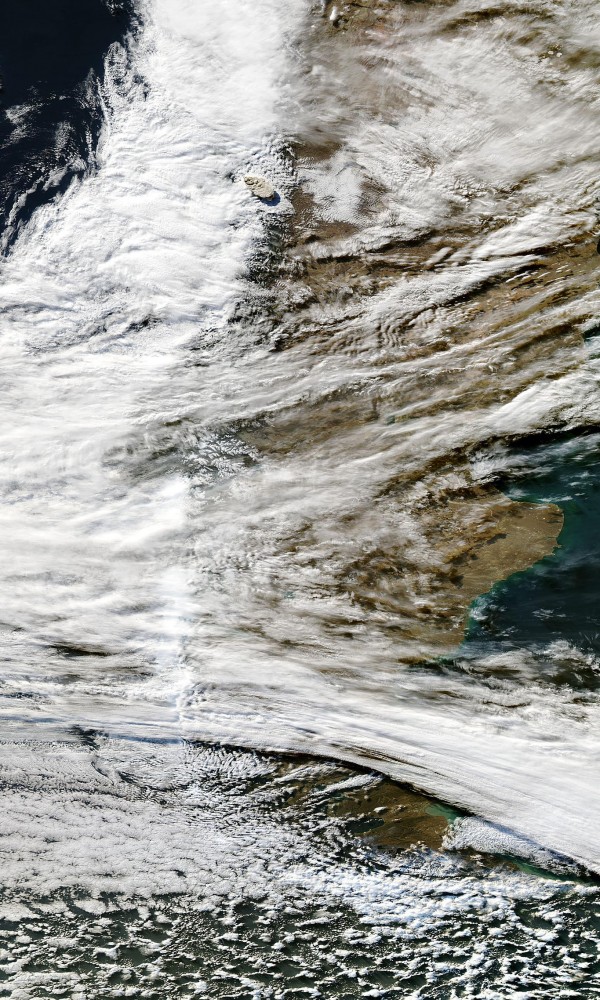 Due to the tectonic setting of Chile earthquakes, volcanic eruptions and mass movements are frequent. The subduction zone along Chile's coast has produced the most powerful earthquake ever recorded, the 1960 Valdivia earthquake. Earthquakes are known to have triggered eruption at volcanoes as it happened in 1960 with Cordón Caulle. Earthquakes have also produced tsunamis and even earthquakes on the other side of the Pacific Ocean have the potential of sending a tsuname wave to Chile.

Landslides may occur with some frequency in Andes of central and southern Chile, most events happens following earthquakes. The 2007 Aysen Fjord earthquake produced several landslides along the fjords mountains producing thus big tsunami-like waves inside the fjord.

Mud flows are also common in some places and occur after large rainfall events. Lahars have been are among the most lethal volcanic hazards in Chile, destroying towns such as Coñaripe in 1964. Although many lahars are triggered by volcanic eruptions they are often mistaken as unequivocal sign of eruption, which is not the case.

Residents of Savai'i in Samoa were left stranded after heavy rain dropped by Cyclone "Wasi" caused rivers to overflow during the weekend. Although no significant damage was reported, some rivers and roads remained inundated on Monday, February 24,...

Massive sandstorm hits Canary Islands, authorities describe it as the worst in 40 years

A massive sandstorm with winds up to 120 km/h (75 mph) hit the Canary Islands over the weekend and continued into Monday, February 24, 2020. The storm caused severe disruptions and exacerbated wildfires which forced about 2 000 residents to evacuate. The regional...

Flash flooding hit a group of 249 high school students who were on a school trip in Java Island's Yogyakarta region, Indonesia, on February 21, 2020. At least 10 were confirmed dead on Sunday, February 23, while 23 of them were treated for injuries. The tragedy...

A short-lived episode of volcanic earthquakes occurred beneath Mt. Ruapehu on February 22 and 23, 2020. The sequence now appears to be over​. The Volcanic Alert Level, therefore, remains at Level 1. The last known eruption of this volcano took place in 2007 (VEI...

Tropical Cyclone "Esther" made landfall near the border of Northern Territory and Queensland as a Category 1 system on Monday, February 24, 2020. The storm had sustained winds near the core of 60 km/h (37 mph) with gusts to 95 km/h (59 mph), moving west at...

2017 Hurricane "Harvey" ranks first on the top 10 most extreme weather events in the U.S. this decade, according to new research published in journal Weatherwise. Coming in second is 2012 'Frankenstorm' Hurricane "Sandy," followed by...

A new study by Harvard astronomers suggests there could be small meteors (1 to 100 mm / 0.04 to 4 inches) traveling at close to the speed of light when they hit the Earth's atmosphere. Such meteors are likely the result of nearby supernovae that speed up...

Crew aboard an aircraft used for hunting hurricanes captured a rare, spectacular weather phenomenon called St. Elmo's Fire while flying over the North Atlantic on February 15, 2020. The phenomenon was captured by the NOAA42 Kermit crew as they flew across the...

Vast swarms of locusts are invading agricultural areas across Saudi Arabia after countries in the Horn of Africa struggled with the biggest outbreak in decades. The swarm was confirmed to be from East Africa, according to Mohamad Al-Shammrani, director of combating...

Heavy downpour continues to batter Argentina, affecting several northern provinces, including Chaco, La Rioja, Salta, and Tucuman. More than a hundred families have been evacuated due to widespread flooding on February 20, 2020. In Chacho, the provincial government...

A severe winter storm hit Norway this week, dumping heavy snow and causing travel and power disruptions across parts of the country. Dozens of people were left stranded on closed roads and at least 2 people lost their lives after an avalanche hit off the...

IMO: Deadly gases measured, stay away from caves in Eldvörp area on the Reykjanes Peninsula, Iceland

The Icelandic Met Office (IMO) is warning residents and tourists to temporarily stop exploring caves in the Eldvörp area on the Reykjanes Peninsula due to deadly gasses measured in a cave close to a parking lot. In their warning issued at 10:59 UTC on February...

California returning into drought conditions, reservoirs still at or above average, U.S.

Drought conditions are returning to California as major rain and significant mountain snow had not fallen since December 2019. Sacramento and San Francisco have not seen a drop of rain in February 2020, which is usually one of the wettest months of the year for the...