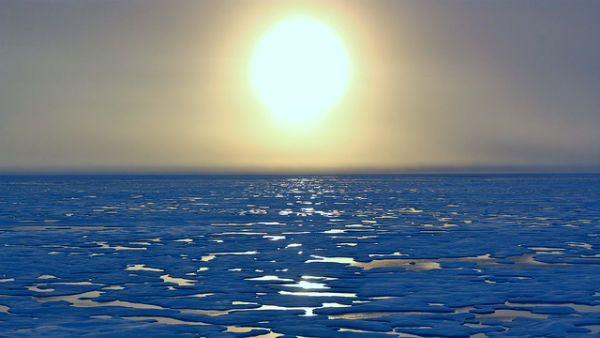 At the start of 2013, temperature change occurred high in the atmosphere over the Arctic Circle, which caused an arctic outbreak in North America during the middle of January. In some places the air just north of the Great Lakes was colder than that over the North Pole. This phenomenon is known as sudden stratospheric warming. Meteorologists point that the cold pattern delivered by this stratospheric event generally lasts a couple of weeks to a couple of months. According to the NWS, there have been only 17 instances since 1948 when the low temperature reached or dipped below 0°F (-17°C) with no snow cover on the ground. The most recent occurrence was January 20, 2008, with low temperatures reaching  -6°F (-21°C).

In the video bellow you can see the weather data from NOAA/NCEP’s Real-Time Mesoscale Analysis which show the pronounced change in temperatures due a drop in the jet stream. Areas colored blue are below freezing. The diurnal cycle of heating and cooling can be seen over time.

Sometimes large storms in the troposphere (the  lower part of the atmosphere) can cause sudden warming  in the stratosphere ( the upper atmosphere). When the stratosphere suddenly warms, it forces a large area of low pressure at the surface, known as the polar vortex, to weaken. This is a dramatic event in the stratosphere and is accompanied by sharp warming in the polar region. The vortex itself can break into multiple parts and moves southward.

This time the polar vortex shifted its position to northern Quebec, Canada. The other piece of the vortex was displaced southward setting up a wedge of cold air over Europe and Asia, displacing steering-levels winds and setting up cold storms from the UK to part of the Middle East. Beginning of 2013 started with intense cold and freezing temperatures in western and northeastern China, Mongolia, Russia, and the Korean Peninsula. Frigid conditions froze part of the Yellow River and trapped roughly 1,000 ships in Laizhou Bay in China 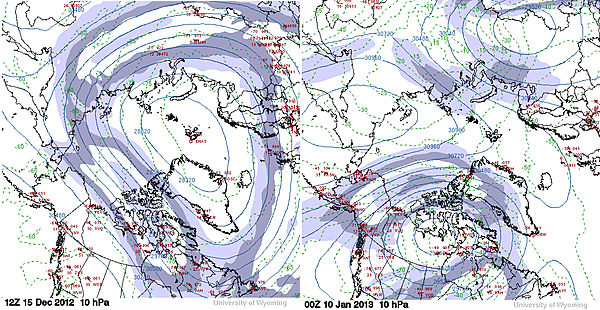 Click here to see an animation showing the evolution of the stratospheric warming event.

According to Michelle L’Heureux, a climate scientist at the Climate Prediction Center, a phenomenon known as the Madden-Julian Oscillation, or MJO, also favors colder-than-average conditions in parts of the U.S. right now, and may even be a bigger factor than the more dramatic stratospheric warming event. The MJO is associated with a pattern of tropical rainfall that moves eastward along the equator, going around the world in about 30-to-60 days. Because the MJO influences atmospheric heating through tropical rainfall, it can modify weather patterns far away from the equator.

According to meteorologist Mark Paquette, the chain reaction that occurs following the sudden warming in the stratosphere, typically leads to one or more arctic outbreaks at the mid-latitudes around the Northern Hemisphere roughly two to three weeks later. Sudden stratospheric warming events take place in about half of all Northern Hemisphere winters, and they have been occurring with increasing frequency during the past decade, possibly related to the loss of Arctic sea ice due to global warming.

More waves of frigid air, or arctic outbreaks, can be expected into roughly the same locations of North America. According to meteorologist Paul Pastelok, some additional waves of cold air are likely to yield below-average temperatures for the end result of February.