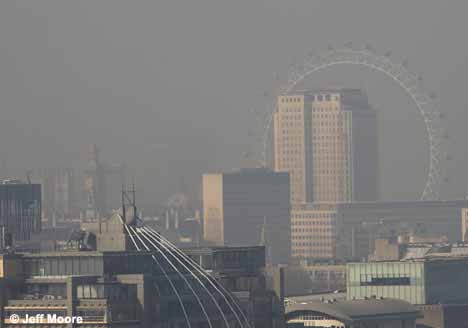 The government has issued a “smog alert” in England and Wales for ozone and polluting particles known as PM10s, which can affect people’s health. The Department for Environment, Food and Rural Affairs said high levels of pollution would continue over the Easter weekend. It said the alert was due to warm and still conditions brought on by a high pressure system.

Defra is urging the public to take “sensible precautions”. It said some people, including those who have asthma – and particularly the elderly – could be affected by the high pollution levels and may notice an impact on their breathing. It advised people to avoid taking exercise outside in the afternoon if they are susceptible to the pollutants and not to take unnecessary short car journeys, to help reduce the amount of pollutants from exhausts.


Ground level ozone is formed when sunlight acts on nitrogen dioxides and other atmospheric substances which come from a range of sources, including petrol and other fuels. Particulates, or PM10s, are also emitted by car exhausts.

The smog alert – the first for more than a year – comes as monitoring in London revealed that one site, on the Marylebone Road, has exceeded EU rules for the number of days in the year in which high levels of PM10s are permitted. The UK will not face fines for the breach, as the EU has given Britain an extension, which means it has until June before it has to start meeting the standards in the capital.

This smog alert is a cause for concern but not for alarm. It’s the second highest of four threat levels and – no surprise – is triggered by a combination of high pressure, warm conditions and traffic pollution. It’s a sad irony that the prospect of a sunny Easter holiday draws people onto the roads – exactly what’ll make the problem worse.

Among the pollutants are PM10s – tiny particles ejected from exhaust pipes which, if inhaled, are known to exacerbate lung conditions. Most people shouldn’t experience any difficulties. But if you’ve got any kind of lung condition, like asthma, the advice is to be aware, avoid being out of doors for too long and turn to the inhaler if necessary. (BBC) 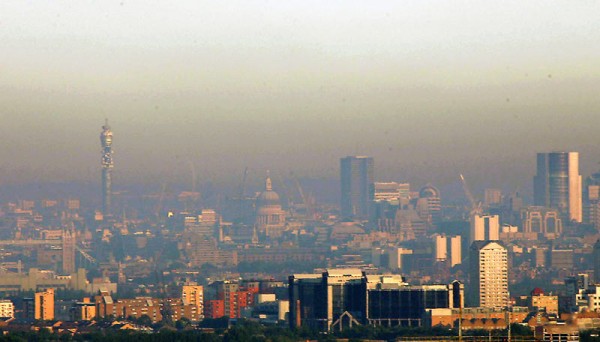 The British government has urged people to avoid taking outdoor exercise in the afternoon over the Easter weekend because of the first “summer smog” of the year. The smog was visible as a haze over the London skyline on Friday morning, the start of a four-day weekend when many people were expected to head outdoors to enjoy the continuing warm weather.

Britain has basked in sunshine for weeks and the Department for Environment and Rural Affairs said warm and still conditions over the next few days would likely cause a “high pollution episode” in England and Wales.

Ground level ozone is formed when sunlight acts on nitrogen dioxide and other atmospheric substances close to the ground. During high pollution episodes, levels of nitrogen dioxide, ozone and polluting particles are raised and can exacerbate lung diseases including asthma. But the ministry said most people should not suffer ill effects. (TerraDaily)