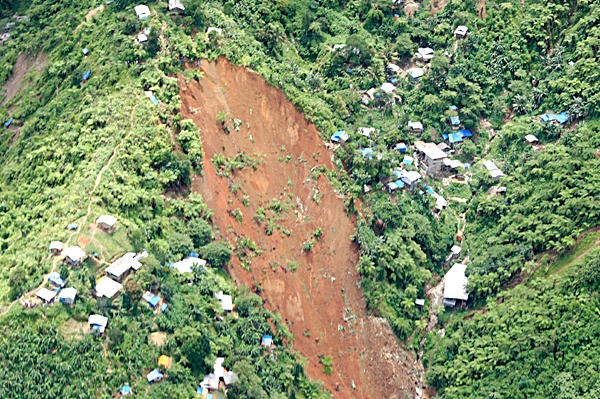 Survivors of the avalanche of mud in the Philippines said today over 60 people were buried alive in Friday’s landslide, and the number could be higher than what authorities had thought of. More than 60 people sleeping in tents were on site when the tragedy occurred.

The landslide occurred at around 2:30 a.m. Friday in Pantukan town of the southern Philippine province of Compostela Valley. Most of the victims were asleep when the incident occurred amid intermittent rains. By Sunday afternoon, five people were confirmed killed in the landslide and some 17 were missing, according to authorities.

Pantukan mayor Celso Sarenas admitted on Saturday that he erred in reporting earlier that 27 bodies were recovered on Friday, claiming that he got wrong figures form local health workers.

Arthur Uy, governor of Compostella Valley, did not discount survivors’ account over the number of possible fatalities. (Philstar) 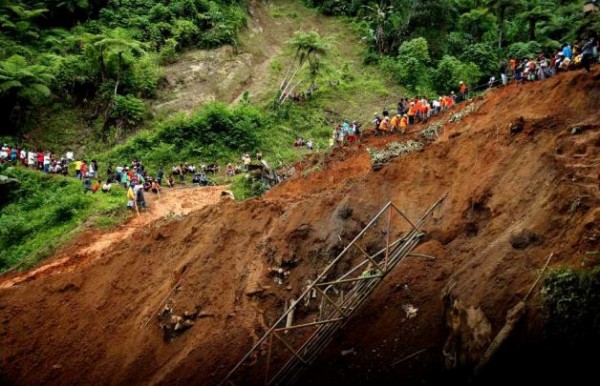 Oficials say they have discovered a dangerous crack in a mountain hit by a deadly landslide last week and want troops to forcibly evacuate dozens of illegal gold miners before another disaster strikes their village. Environment and Natural Resources Secretary Ramon Paje says he and other officials discovered the 230-foot-long fissure on a mountain slope above Kingking village today during an aerial survey.

Paje says a portion of the slope along the fissure collapsed after a downpour Friday and buried several shanties below, leaving at least five gold miners dead and 17 others missing.

Paje says the unstable land along two-thirds of the deep fissure could collapse with the next heavy rain and bury about 30 shanties of miners. (Philstars) 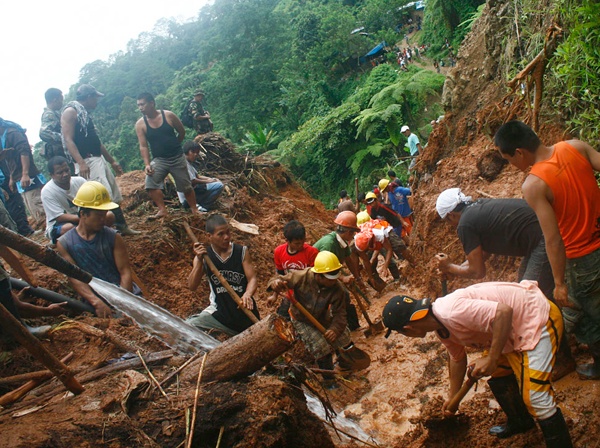 As of 7:30 pm Saturday, April 23, three persons have been confirmed dead, 13 rescued and 21 still missing. (MindaNews)

The landslide in Side B, Sitio Panganason, Barangay Kingking cut a wide swath of destruction across 500 meters down from the ridgeline. The MDRRMC reported about a hectare was affected. This is not the first time a landslide occurred in the area but this is the worst, thus far. Most of the residents in the area are “transients.”

The affected sitio has a population of 60 households or about 330 persons but the area of incident reportedly had about 14 shanties. Like previous landslides in small-scale mining sites in gold-rich Compostela Valley province since the gold rush in 1983-1984,  the number of  those buried in landslides is difficult to determine.(MindaNews) 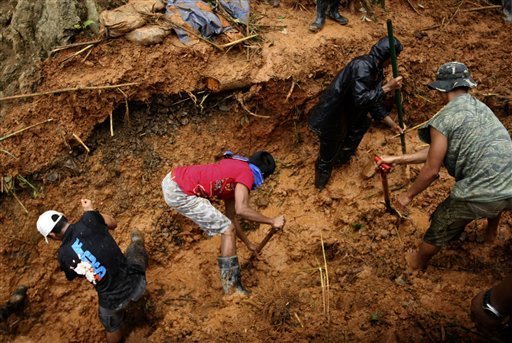 Shanty towns have mushroomed around Kingking after a gold rush in the area nearly 20 years ago. Many of the mining operations are illegal and unregulated, and there are frequent accidents.

U.S-based, Canadian-listed mining firm St Augustine Gold & Copper Ltd and the Philippines’ Nationwide Development Corp said the landslide happened in a remote area some distance away from where they were conducting environmental and engineering studies.

On its website, St Augustine said the Kingking prospect is one of the largest underdeveloped copper-gold deposits in the world. Provincial governor Arturo Uy said the administration was considering suspension of all forms of mining around Kingking following the latest disaster.

Two years ago, a landslide in another part of the village killed more than 20 people, including some children. Residents had been ordered to relocate due to the instability of the land and risk of landslides.

The Philippines sits on an estimated $1 trillion untapped mineral deposits, but has only targeted to attract $1 billion in mining investment this year. (Reuters) 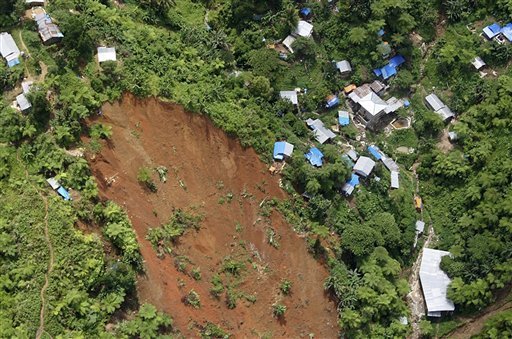 The stretch of the collapsed portion of the mountain could be well more than half a kilometer. At least 20 houses were buried under mud and boulders and the weather is bad so it is harder for rescuers to find survivirs.

Meteorologists have earlier warned of more rains in central and eastern part of Mindanao because of the cold front affecting the weather system in the southern Philippines. (ManilaTimes) 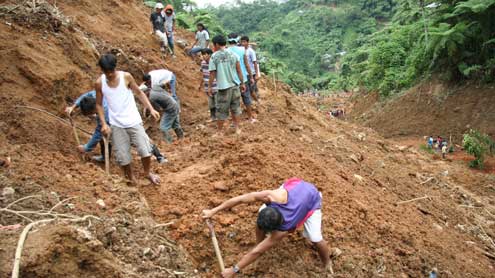