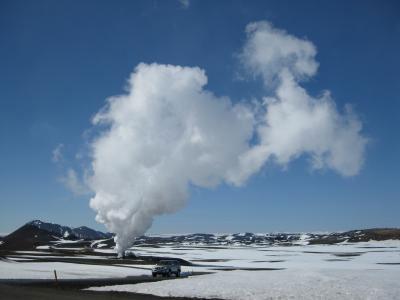 Geologists drilling an exploratory geothermal well into a volcano in Iceland got quite a surprise when the borehole filled with molten magma forcing the researchers to halt the drilling.

However, the sudden appearance of the molten rock wasn't all bad, according to Wilfred Elders, a professor emeritus of geology at the University of California, Riverside, who led the research team that was drilling into the Krafla volcano in 2009.

Roughly 95 percent of home heating and one-third of electric power in Iceland comes from geothermal sources — from steam and hot water that occurs naturally in volcanic rocks — and the team was investigating new ways to harness geothermal energy.

"We were drilling a well that was designed to search for very deep geothermal resources in the volcano. While the magma flow interrupted our project, it gave us a unique opportunity to study the magma and test a very hot geothermal system as an energy source," Elders said in a statement.

The team was planning to drill 2.7 miles (4.5 kilometers) into the volcano, but had to stop at 1.3 miles (2.1 km) when the magma began to flow into the borehole.

"Our analyses show that this magma formed by partial melting of certain basalts within the Krafla volcano," Elders said.

"The occurrence of minor amounts of rhyolite in some basalt volcanoes has always been something of a puzzle," Elders said. "It had been inferred that some unknown process in the source area of magmas, in the mantle deep below the crust of the Earth, allows some silica-rich rhyolite melt to form in addition to the dominant silica-poor basalt magma."

Elders explained that in geothermal systems, water reacts with and alters the composition of the rocks, a process called "hydrothermal alteration."

"Our research shows that the rhyolite formed when a mantle-derived basaltic magma encountered hydrothermally altered basalt, and partially melted and assimilated that rock," Elders said.

Elders believes it should be possible to find reasonably shallow bodies of magma, elsewhere in Iceland and the world, wherever young volcanic rocks occur.

"In the future, these could become attractive sources of high-grade energy," Elders said.