Storm Eunice passed over Ireland and U.K. on Friday and Saturday, February 18 and 19, 2022, before continuing over northern France, Benelux, Denmark, Germany, Poland, and other northern European countries. Eunice sparked the first-ever "red" weather warning for London on Friday. As of Saturday night, Eunice was blamed for the deaths of 16 people. It was one of the most powerful storms in Europe since the "Great Storm" hit Britain and northern France in 1987.

The company said power had been restored to nearly 461 000 of its customers, and work was continuing to restore supply to the remaining 60 000.1

Train operators in Britain urged people not to travel after most of the network was shut down when Eunice brought the strongest wind gust ever recorded in England – 195 km/h (122 mph) at The Needles on the Isle of Wight.2

"This is a particularly exposed station and is not representative of much of the wind seen elsewhere in the U.K.," meteorologists at the UK Met Office said. "This provisionally represents an England national record for highest one-off wind gust recorded. Elsewhere, the highest wind gusts for Storm Eunice have been provisionally reported as between 130 and 145 km/h (80 mph – 90 mph)."

In Brentwood, east of London, a 400-year-old tree crashed into a house where Sven Good was working from home, as millions of other Britons heeded government advice to stay indoors.

Eunice paralyzed the train network in the Netherlands, with no Eurostar and Thalys international services running from Britain and France after damage to overhead power lines. 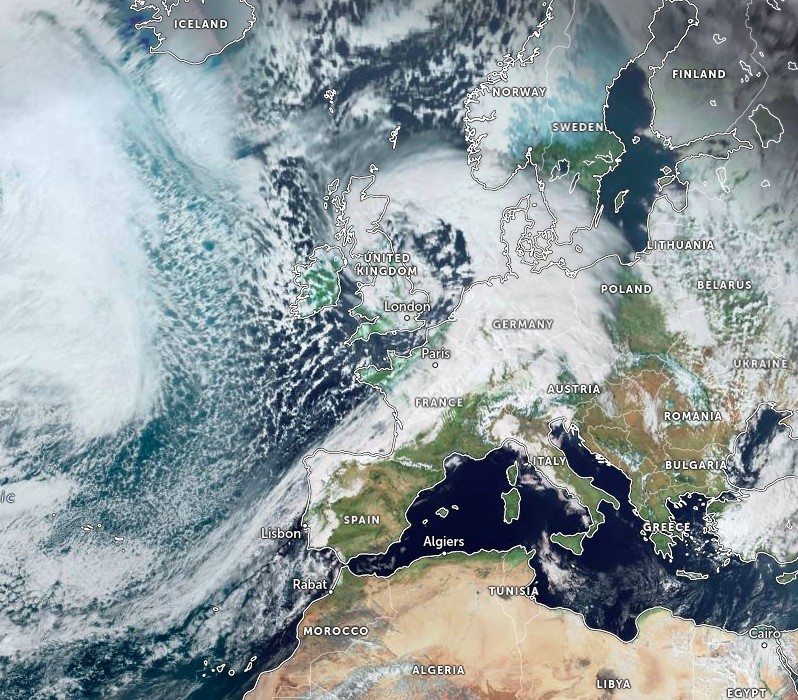 Eunice was one of the most powerful storms in Europe since the "Great Storm" hit Britain and northern France in 1987. Scientists said both storms packed a "sting jet", a rarely seen meteorological phenomenon borne out of an unusual confluence of pressure systems in the Atlantic that magnified the effects of Eunice.

At least 16 people were killed by falling trees and flying debris caused by the fierce winds in Britain, Ireland, the Netherlands, Belgium, Germany and Poland, AFP reported.​

The UK Met Office named another storm on Sunday, February 20 — Storm Franklin — expected to bring high winds during Sunday night and into Monday morning for much of the U.K.

"The latest storm follows on from a week in which Storm Dudley and Storm Eunice also impacted the UK, although wind gusts from Storm Franklin are expected to be lower than Eunice which triggered two Red Weather Warnings," the office said.3

Northern areas of Northern Ireland are covered by an Amber Wind Warning that will be in force from early Monday morning.

Within the Amber Warning area, winds could be in excess of 130 km/h (80 mph) in exposed coastal areas, but more widely between 95 and 112 km/h (60 and 70 mph). Damage to buildings is possible, and there’s likely travel disruption.

The center of Storm Franklin will track eastwards over the north of Scotland from early Monday morning, with the highest winds expected on the southern flank of the system.

Franklin will clear into the North Sea on Monday morning, although high winds will continue to be felt for most through Monday, as is reflected in the Yellow Weather Warning.