A GPS network data revealed a shallow and fully locked part on the Caribbean subduction zone in Colombia, indicating that there is a possible large earthquake and tsunami hazard for the country's northwest region.

Colombia is situated in the middle of a complex tectonic zone, where the Caribbean, Nazca, and South American tectonic plates, as well as other smaller tectonic blocks, converge.

The Caribbean plate is converging very slowly with the northern region of Colombia at 7 mm (0.3 inches) every year, which may be the reason for the long time between large earthquakes in the northwest.

Lead author Sindy Lizarazo of Nagoya University in Japan, who presented the study at the Seismological Society of America (SSA) 2021 Annual Meeting, said the locked patch south of Cartagena can generate an M8.0 quake every 600 years.

"The only recent historical record of a disastrous [M6.4] earthquake in the Colombian Caribbean region was on May 22, 1834 close to Santa Marta," she said.

"However, there is no seismic event that meets the magnitude estimated by our study, nor tsunamis in the historical record on the northern part of Colombia."

To better understand the crustal deformation and complex movements occurring in the region, Lizarazo and her colleagues studied data from the GPS network GeoRED, which has been operated by the Geological Survey of Colombia since 2007.

The data revealed motion of the northern part of the North Andean Block– a microplate squeezed between the Nazca and South American plates that causes it to interact with the subducting Caribbean plate.

Along with a realistic slab configuration, the team estimated the extent and degree of interplate locking along the boundary, where tension may build without being released in a quake.

"[The study] provides the first evidence of a shallow locked region south of Cartagena. This indicates that this segment of the Caribbean-South America plate boundary in northwestern Colombia can be the locus of a significant earthquake and tsunami hazard," said Lizarazo.

"It is also necessary to continue with the densification of the GPS network in the country, increasing its coverage and operation in real-time." 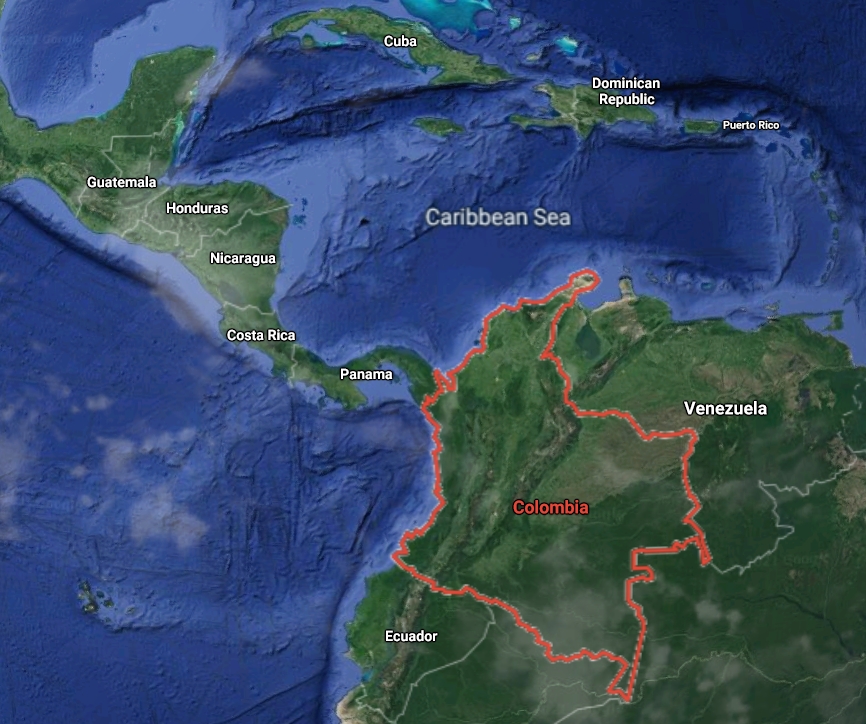 Colombia is a region of complex tectonics due to the interaction between the Caribbean, Nazca and South American plates, as well as other major tectonic blocks. Under this setting, the GPS network has become an important tool to study the regional kinematics, understand the crustal deformation and infer its potential implications in terms of geohazards. GPS velocity data for the period 2008-2017 indicate a differential motion of the northern part of the North Andean Block, which also presents a mechanical interaction with the subducting Caribbean plate. Additionally, this region presents significant compressive GPS strain rates (65 nanostrain/yr). Thus, we perform a 3D GPS data inversion to estimate the extent and degree of interplate locking along this boundary following Sagiya and Mora-Páez (2020). Our results show a shallow and fully locked patch south of Cartagena city, as the first indication of a possible seismic/tsunami hazard in this region. Considering a perfectly elastic behavior of the overriding plate, the source region would be able to generate a Mw 8.2 earthquake every 700 years. This long recurrence interval is due to the slow convergence of the Caribbean plate (7 mm/yr). Another possibility is under the assumption of plastic deformation of the hanging wall of the subduction. However, discrepancy of one order of magnitude between long-term and geodetic strain rates do not support this interpretation. Available evidence suggests that a careful attention is necessary for the first scenario due to its hazardous implications and the lack of a large earthquake in the last 500 years. Indeed, it has been reported that other slow subduction zones worldwide (e.g. Calabria and Gibraltar) are able to generate M8 earthquakes and tsunamis (Gutscher and Westbrook, 2009). Nevertheless, an integration of paleoseismological and paleotsunami records becomes urgent in order to identify recent crustal shortening or large past earthquakes/tsunamis in northwestern Colombia.