Subtropical Storm "Potira" formed off the coast of Brazil on Tuesday, April 21, 2021, one month ahead of the start of the North Atlantic hurricane season. It is considered a rare tropical system as it has developed too early in the season and formed in a part of the Atlantic Ocean where such systems rarely take place.

According to AccuWeather, Potira can be traced back to a non-tropical disturbance that moved off Brazil's coast over the weekend, before stalling over the ocean just off the coast.

As it lingered over the water, it eventually started to develop and gain some characteristics of a tropical storm. It was ultimately declared a subtropical storm by the Brazilian Navy.

The storm is expected to drift south over the next couple of days while maintaining subtropical status. It will likely dissipate without direct impacts on land, except brought surf along the nearby coast. 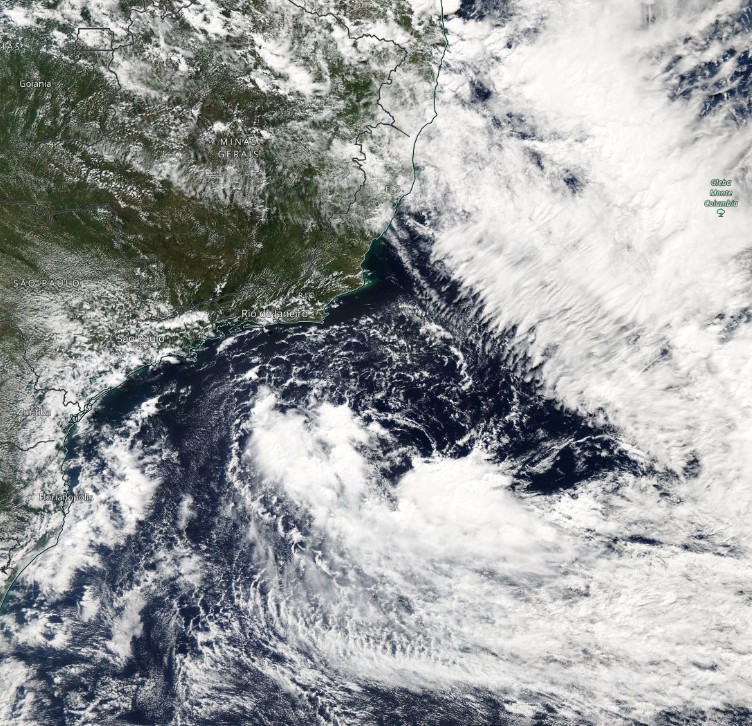 MARINHA has named this Subtropical Storm #Potira. Doesn't really look good of a storm but that's common for the South Atlantic. ATCF also hasn't recognized this system yet. pic.twitter.com/eq4uYNSVKg

Subtropical Storm #Potira had forms over the South Atlantic just offshore the East of Brazil. pic.twitter.com/nk7gU6WL0E

Sitting off the coast of #Brazil lies #Potira named “subtropical storm” by MARINHA standards. It seems it will remain a subtropical storm away from the coast and possibly getting slightly stronger. #Tropics pic.twitter.com/jP975dMBZX

Before Potira, only 14 named tropical systems have formed in the Atlantic south of the equator, a majority of which were subtropical.

The most recent subtropical storm was Oquira, which developed on December 28, 2020, according to Brazil's Navy.

Only one system has ever had a hurricane status in the South Atlantic — Catarina, which became a Category 2 hurricane before making landfall in Brazil in March 2004.

"Catarina landed in its namesake state in southern Brasil and had enough strength to bring loss of life," said Jim Andrews, a meteorologist with AccuWeather.

Tropical systems are rare in the southern Atlantic Ocean as the conditions south of the equator are different than they are in the north. One of the major factors is wind shear– when this is low, it allows disturbances to form and likely develop into a hurricane.

This disruptive wind is higher in the southern Atlantic compared to the north. "Having strong wind shear, it becomes very difficult to nearly impossible to have the genesis of tropical cyclones," the National Hurricane Center explained.

Another factor is that the water temperature in this region is usually lower, reducing the potential for tropical storm development.