Researchers uncovered the reason for unexpected strike-slip earthquakes, where two pieces of crust slide past each other on a fault, in areas where subduction zone tremors are common.

From July to October 2020, a series of earthquakes occurred in Shumagin Islands, raising the possibility of greater coupling. The initial Mw 7.8 thrust faulting earthquake straddled the eastern edge of the Shumagin Gap and was followed by an Mw 7.6 strike-slip earthquake within the Shumagin Gap.

"The first earthquake that occurred in the Shumagin Islands region of Alaska was the right type," said Kevin Furlong, professor of geoscience at Penn State and author of the new study published recently in Science Advances. "The second one was a strike-slip earthquake and that made no sense. That was the part that got us thinking."

In subduction zones, where two plates meet, one slides beneath the other. If the tectonic plates slide smoothly, they are considered uncoupled. If the plates hang up on each other until forces overcome the friction holding them then release, triggering an earthquake, they are considered coupled. Some areas of a subduction zone can be coupled, while other parts may be uncoupled.

"There must be a fault in the subducting Pacific Plate, and we can't see it," said Furlong.

The oceanic crust is strike-slip faults that form at the mid-oceanic ridges, he added. The fault in the area could be a relic of a fault from the mid-ocean ridge, which was activated in a different way. Furlong added that it appears to be in the correct direction. 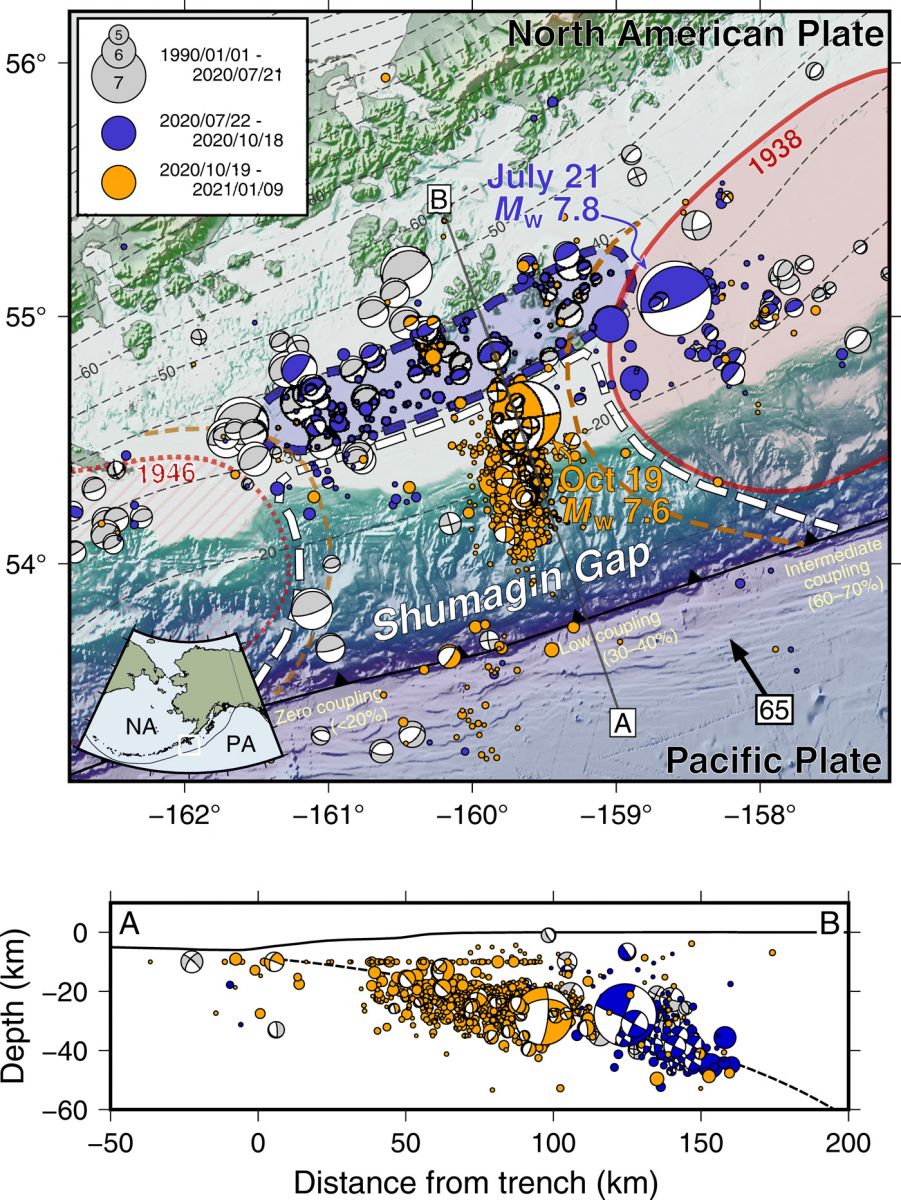 To examine this occurrence, Furlong and his fellow author Matthew Herman, an assistant professor of geology, California State University, modeled the quakes including data from the small tsunami that happened from the second tremor, as well as data presence of a fault in the subducting plate.

"The potential for unusual earthquakes in these regions makes sense from our computational models," explained Herman. "But it is still pretty counterintuitive that making the expected kind of earthquakes less likely actually makes other types of big earthquakes more likely."

The researchers said the tsunami data was helpful, especially in places where GPS data were unavailable. Tsunamis also enabled paleoseismologists to observe past events through any deposits left by past earthquakes. There was previously no evidence of huge earthquakes in this area from tsunami data.

"There are probably other areas that are uncoupled where we assume they are safe from earthquakes, but they aren't," Furlong stated. "They are unlikely to have a big subduction earthquake, but they could have a strike-slip earthquake. If there are people in the area, it could do damage with shaking and a small tsunami."

In the 1970s, the Shumagin Islands region of the Alaska subduction zone was identified as a seismic gap expected to host a future great [moment magnitude (Mw) ≥8.0] earthquake. More recent geodetic data indicate that this region is weakly coupled, and the geologic record shows little evidence of past large events. From July to October 2020, a series of earthquakes occurred in this region, raising the possibility of greater coupling. The initial Mw 7.8 thrust faulting earthquake straddled the eastern edge of the Shumagin Gap and was followed by an Mw 7.6 strike-slip earthquake within the Shumagin Gap. Stress modeling indicates that this strike-slip earthquake is in fact favored if the Shumagin Gap has low coupling, whereas a highly coupled Shumagin Gap inhibits that type and location of earthquake. The initial thrust earthquake and its afterslip enhanced the strike-slip loading within the subducting slab, helping to trigger the October event.