Four people have been killed and 130 rescued after near-record levels of rainfall hit Nashville, Tennessee on March 27 and 28, 2021, causing significant flooding across the region. John Cooper, Mayor of Nashville declared a local state of emergency. The last time such destructive flooding hit Nashville was in May 2010, causing the death of 26 people and damaging or destroying almost 11 000 properties.

The final 48-hour rainfall total at Nashville International Airport is 178 mm (7.01 inches), the NWS office in Nashville said. This is the second-highest two-day rainfall ever recorded there. 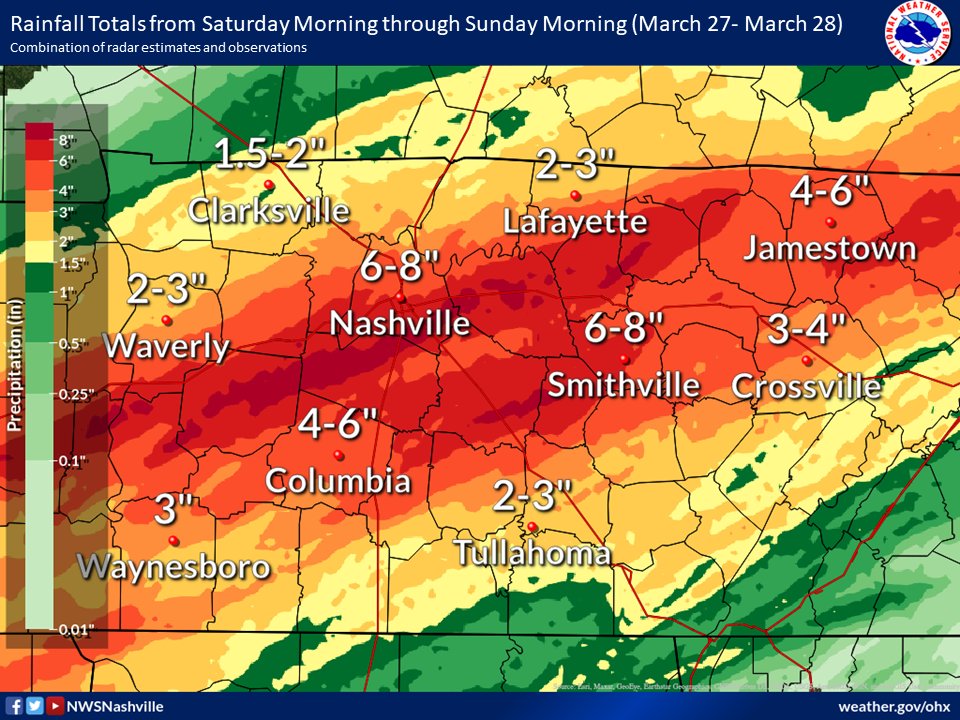 "Levels on the smaller creeks and streams have receded greatly and most have returned to normal," Nashville MWS said on March 28.

"Both the Cumberland and Harpeth have risen throughout the day, as expected, but at a steady pace, in line with our projections. The drinking water system remains stable and safe. Mitigation efforts after the May 2010 flood, which included floodproofing of K.R. Harrington and the installation of generators at Omohundro, have ensured that our water system is not at risk."

Flood warnings remained in place for parts of Davidson County early Sunday morning, Nashville OEM said, urging residents not to drive through ponding water or around barricades on roads or emergency vehicles blocking roads or other areas.

Flooding at my apartment complex on Linbar Dr. So many people lost their homes Including people on the floor below me. It’s really bad. #Nashville #nashvilleweather pic.twitter.com/DLnedlF5dC

We took DroneForce1 to the Harpeth River at Highway 100. This is what we saw. Donate time, money, or kindness to the people affected by this flooding event. While it may not have been 2010 all over again, for some isolated folks, it's worse. #NashvilleStrong #Nashville #Flood pic.twitter.com/v8DRbQI3lF

The body of a 70-year-old Nashville man was recovered just after 09:00 LT on Sunday from a Honda Sedan that had become submerged by flooding in an area of the Wal-Mart parking lot at Harding Place and Nolensville Pike. The creek runs beside the Wal-Mart store and the Fazoli’s Restaurant.

At the same time, a citizen checking a homeless camp in woods adjacent to Wentworth-Caldwell Park off Edmondson Pike, very close to 7 Mile Creek, located a 46-year-old woman deceased inside a tent.

Responding officers subsequently located a 64-year-old man on the ground at the camp also deceased.

At 07:25 LT, at another location, the body of a suspected flood victim was found on the golf course at Nashboro Village. It appears that 65-year-old Douglas Hammond’s car became stranded in high water at Nashboro Blvd and Flintlock Court.

Hammond is believed to have exited the car and then fallen into the high water from a creek that runs through the golf course.

At least 7 700 customers experienced power outages at the height of the storm.