A series of shallow earthquakes are shaking the area northwest of the city of Granada, Spain since the beginning of December 2020. The activity reintensified at the end of January, with more than 1 000 earthquakes since January 23. Major earthquakes have occurred throughout history in the province of Granada. The oldest known occurred in 1431 south of Granada with a macroseismic intensity of VIII-IX, producing great damage in the Alhambra.

IGN said the quakes have magnitudes mostly below 2.5 and depths less than 10 km (6.2 miles).

On December 2, IGN registered M3.6 earthquake with a maximum intensity of IV-V in Atarfe and Santa Fe. The quake was widely felt in numerous locations around the epicenter but without causing any damage.

The sequence has subsequently been reactivated at the end of January 2021.

All have been strongly felt in numerous localities close to the epicenter, as well as in the city of Granada, and in some towns in the provinces of Malaga, Almería, Córdoba, and Jaén.

From December 1, IGN registered a total of 1 167 earthquakes, of which 27 were greater or equal to M3.0 and 102 have been felt by the population. 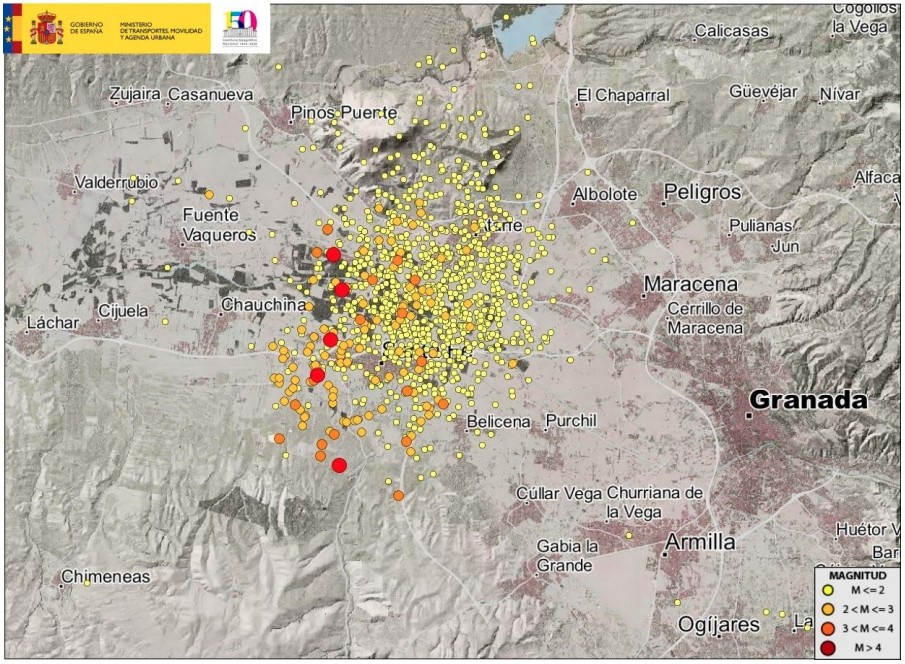 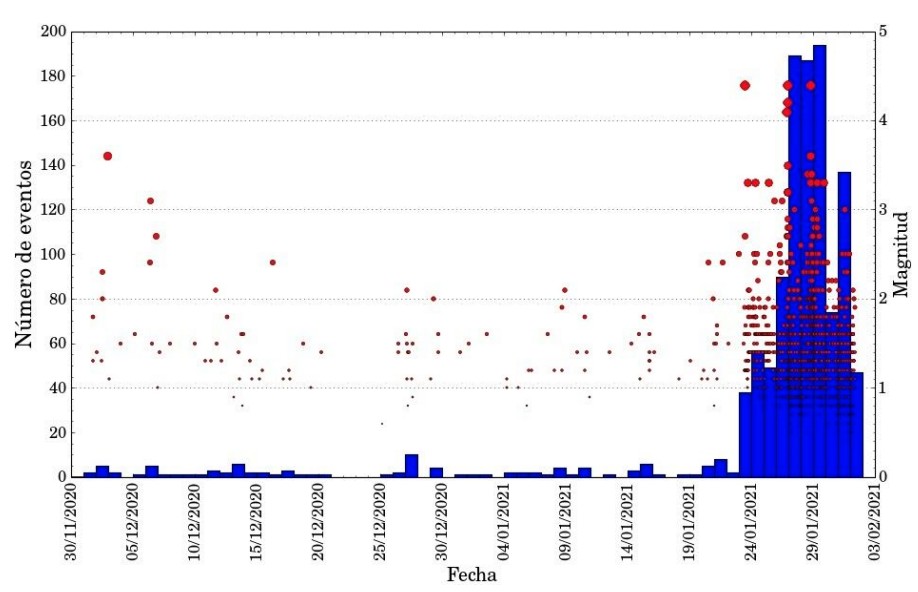 Number of earthquakes per day and their magnitudes. Credit: IGN

The recorded seismicity is within expected for this area, located in the central sector of the Betic mountain ranges, one of the regions with the highest seismic activity in the Iberian Peninsula, IGN experts said.

This zone is characterized by the occurrence of numerous shallow earthquakes of low to moderate magnitude, and with occasional significant intensity.

There is also some seismicity at depths spreading into the western part of the Alboran Sea and, occasionally, earthquakes at depths of more than 600 km (370 miles) with an epicenter in the province of Granada whose origin is possibly related to the tectonic history of the Gibraltar arc, about which there is no unanimous agreement.

Major earthquakes have occurred throughout history in the province of Granada. The oldest known occurred in 1431 south of Granada with a macroseismic intensity of VIII-IX, producing great damage in the Alhambra.

The strongest one took place in 1884 in Arenas del Rey, which reached an intensity of IX-X and left 839 people dead.