A major winter storm is expected to impact portions of the Mid-Atlantic and New England Wednesday into Thursday, December 16 into 17, 2020, as a nor'easter develops and lifts up the Mid-Atlantic Coast, NWS WPC warns.

Heavy snow is expected near and north of the I-95 corridor in the Washington D.C., Philadelphia, New York City, and Boston metropolitan areas.

Freezing rain and ice accumulations are expected in northwest North Carolina and across much of southwest and central Virginia.

"Confidence is high that this winter storm will result in significant impacts including travel disruptions and power outages across much of the Mid-Atlantic and southern New England. Details in the magnitude of the snow and ice accumulations and the snow to wintry mix to rain line will improve as the midweek approaches," WPS said. 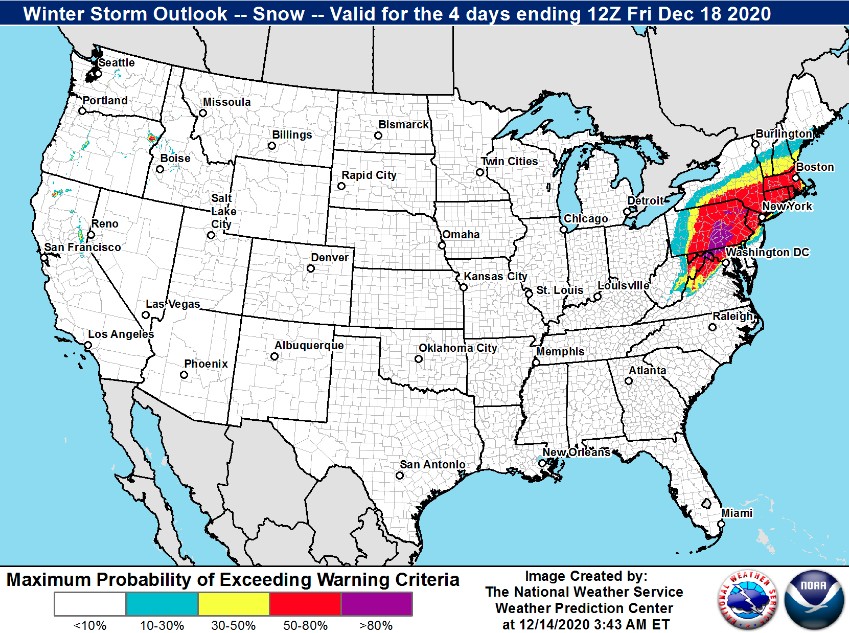 A potent low pressure system currently located over the Southeast is forecast to zip across the Mid-Atlantic today (December 14), bringing locally heavy rain and a brief change-over to snow. The heaviest rainfall amounts, around 25 mm (1 inch), will likely be found from northern North Carolina through central Virginia and into southern Maryland.

Further north and northwest, colder air will allow for precipitation to fall as snow from the central Appalachians to the Northeast. From around 75 to 150 mm (3 to 6 inches) of snow could accumulate across higher elevated regions in West Virginia, with 25 to 50 mm (1 to 2 inches) possible from south-central Pennsylvania to western Connecticut.

As the low pressure system exits the East Coast Monday evening, gusty northwest winds will bring colder air into the region. Additional light and festive snow will be found throughout much of the Intermountain West and the central Rockies today.

As the upper-level trough associated with the light snow pushes east, precipitation is forecast to spread into the central Plains by Tuesday, December 15.

Snowfall amounts should remain on the lighter side, but could add up to 100 mm (4 inches) across parts of southern Nebraska, western Kansas, and north-central Oklahoma.

By Wednesday morning, this same upper-level trough combined with a developing area of low pressure off the Southeast coast is set to eventually bring major winter weather impacts to parts of the Mid-Atlantic.

A strong area of high pressure is forecast to be situated over southern Quebec, Canada. This will help filter subfreezing temperatures east of the Appalachian Mountains and as far south as northern Georgia.

A mixture of sleet, snow, and freezing rain could begin to cause impacts across western North Carolina as early as Wednesday morning.

By this time frame, the storm will just be in the beginning stages, NWS forecaster Snell said.