A shallow M5.6 earthquake hit about 5 km (3.1 miles) W of the geothermal area in Seltun on Iceland's Reykjanes peninsula at 13:43 UTC on October 20, 2020. This is the largest earthquake measured in the peninsula since 2003.

According to the Icelandic Met Office (IMO), the quake was widely felt around the country, especially in the southern part of the peninsula and in the capital Reykjavik, located some 25 km (15 miles) E of the epicenter.

IMO registered hundreds of aftershocks in hours after the quake, with the largest ones in the period between 15:27 and 15:32 UTC.

There are no signs of volcanic unrest in the area, IMO said on October 20.

"There is an active long-term process ongoing in the area and we can expect that there will be more earthquakes in the coming hours that will be felt all the way to the capital area," says Kristín Jónsdóttir, Earthquake hazards coordinator at the Icelandic Met Office, in an interview with RÚV.

A great deal of earthquake activity has been ongoing in the peninsula in 2020, IMO specialists noted. 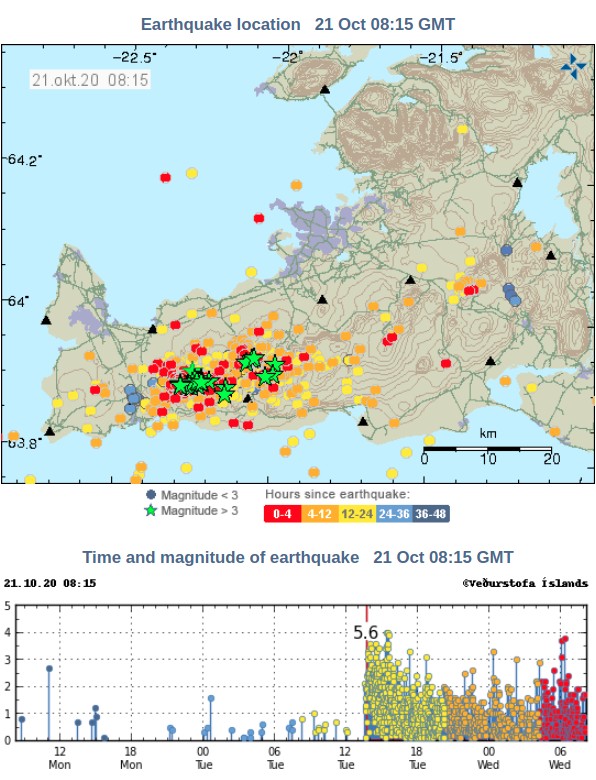 Earthquakes of M5 were recorded in July this year, by Fagradalsfjall, just west of the October 20 M5.6 earthquake.

Earthquake history of the Reykjanes Peninsula shows that large earthquakes have occurred in the past in connection with large earthquake swarms. Therefore, there is the possibility of large aftershocks occurring in this swarm.

The largest earthquakes in the area can possibly reach M5.5 – 6. Those types of earthquakes can cause damages within the capital area, IMO said.