In a new study, scientists from the University of Liverpool in England traced back the strange behavior of the magnetic field in the South Atlantic region and found that similar anomalies existed as far back as 8 to 11 million years ago.

The South Atlantic Anomaly is an area characterized by a major reduction in the strength of the Earth's magnetic field, compared with areas of the same geographic latitudes.

In this area, there is less protection from harmful radiation from space. The most significant indications of this are technical malfunctions aboard spacecraft and satellites.

Liverpool paleomagnetic researchers examined the record of the planet's magnetic field, which is preserved in igneous rocks from the Saint Helena Island, located in the middle of the South Atlantic Anomaly.

Geomagnetic records from the rocks covering 34 various volcanic explosions that occurred between eight to 11 million years ago showed that at these occurrences, the direction of the magnetic field for Saint Helena usually pointed far from the North Pole, just as it does now. 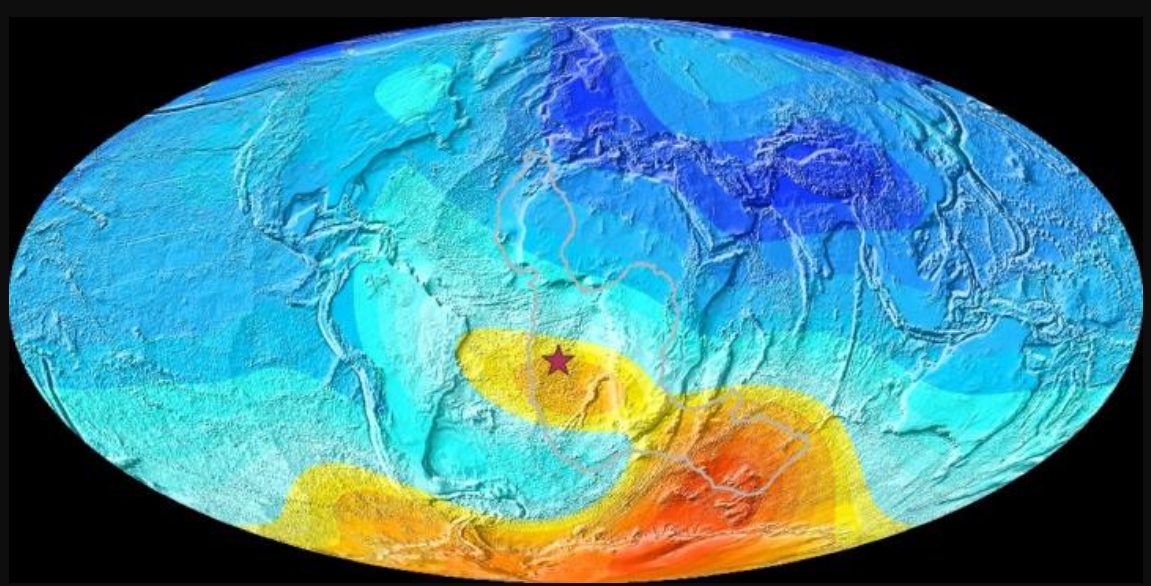 The South Atlantic Anomaly is a topic of debate among scientists. Aside from the fact that it causes damage to space technology, it also raises the concern about where it originates and whether it represents the beginning of the total weakening of the field, and a possible pole reversal.

"Our study provides the first long term analysis of the magnetic field in this region dating back millions of years," said lead author Yael Engbers, a Liverpool Ph.D. student.

"It reveals that the anomaly in the magnetic field in the South Atlantic is not a one-off, similar anomalies existed 8to 11 million years ago."

"This is the first time that the irregular behavior of the geomagnetic field in the South Atlantic region has been shown on such a long timescale. It suggests that the South Atlantic Anomaly is a recurring feature and probably not a sign of an impending reversal," he added.

"It also supports earlier studies that hint towards a link between the South Atlantic Anomaly and anomalous seismic features in the lowermost mantle and the outer core. This brings us closer to linking behavior of the geomagnetic field directly to features of the Earth's interior."

"Elevated paleomagnetic dispersion at Saint Helena suggests long-lived anomalous behavior in the South Atlantic" – Engbers, Y. A. et al. – Proceedings of the National Academy of Sciences of the United States of America – https://doi.org/10.1073/pnas.2001217117

Earth’s magnetic field is presently characterized by a large and growing anomaly in the South Atlantic Ocean. The question of whether this region of Earth’s surface is preferentially subject to enhanced geomagnetic variability on geological timescales has major implications for core dynamics, core−mantle interaction, and the possibility of an imminent magnetic polarity reversal. Here we present paleomagnetic data from Saint Helena, a volcanic island ideally suited for testing the hypothesis that geomagnetic field behavior is anomalous in the South Atlantic on timescales of millions of years. Our results, supported by positive baked contact and reversal tests, produce a mean direction approximating that expected from a geocentric axial dipole for the interval 8 to 11 million years ago, but with very large associated directional dispersion. These findings indicate that, on geological timescales, geomagnetic secular variation is persistently enhanced in the vicinity of Saint Helena. This, in turn, supports the South Atlantic as a locus of unusual geomagnetic behavior arising from core−mantle interaction, while also appearing to reduce the likelihood that the present-day regional anomaly is a precursor to a global polarity reversal.