Researchers have proposed a new algorithm that can describe a gravitational signal caused by earthquakes with great accuracy. The procedure could help in improving early warning systems for earthquakes or tsunamis in the future.

Earthquakes send out signals that proliferate at the speed of light and can be recorded before the relatively slow seismic waves. These signals are sudden changes in gravity caused by a shift in the Earth's inner mass.

Recently, these signals called Prompt Elasto-Gravity Signals (PEGS) were tracked by seismic measurements. With the help of PEGS, it is possible to spot an earthquake very early, even prior to the arrival of destructive quakes or tsunami waves.

However, the gravitational effect of this phenomenon is so small that it only amounts to less than one-billionth of the planet's gravity, which means PEGS can only be recorded for powerful earthquakes.

Furthermore, the process of their generation is complex as they are not only produced directly at the quake's source but also persistently as the tremor waves propagate through the Earth's interior.

There has been no exact method to simulate the generation of PEGS signals on computers. For the first time, the algorithm proposed by researchers from the GFZ German Research Center for Geosciences can calculate PEGS signals with great accuracy and less effort.

The researchers were able to present that the signals enable conclusions to be drawn about the strength, duration, and mechanism of very strong earthquakes.

A tremor abruptly changes the rock slabs in the Earth's interior, thus also shifting the mass distribution in the Earth. This displacement can amount to several meters in powerful earthquakes.

"Since the gravity that can be measured locally depends on the mass distribution in the vicinity of the measuring point, every earthquake generates a small but immediate change in gravity," said researcher Rongjiang Wang.

However, every tremor also produces waves that change the density of rocks and gravitation for a short time. This oscillating gravity triggers secondary seismic waves.

"We faced the problem of integrating these multiple interactions to make more accurate estimates and predictions about the strength of the signals," said Torsten Dahm, head of GFZ section Physics of Earthquakes and Volcanoes.

"Wang had the ingenious idea of adapting an algorithm we had developed earlier to the PEGS problem– and succeeded." 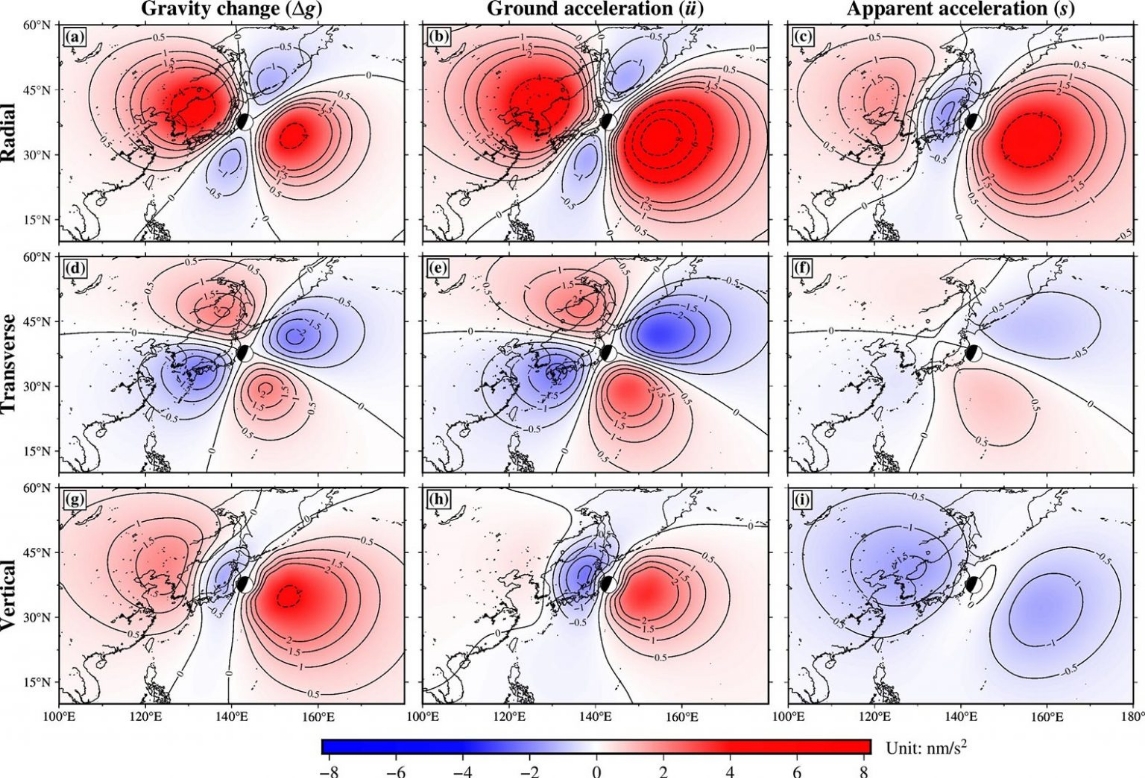 Spatial distribution of PEGS signal strength during the Tohoku quake in 2011, shortly before the arrival of the primary seismic wave. Image credit: Zhang, et al.

Sebastian Heimann, program developer and data analyst at GFZ explained how they tested their new algorithm, saying, "We first applied our new algorithm to the Tohoku quake off Japan in 2011, which was also the cause of the Fukushima tsunami."

"There, measurements on the strength of the PEGS signal were already available. The consistency was perfect. This gave us certainty for the prediction of other earthquakes and the potential of the signals for new applications."

Researchers added that by evaluating the changes in gravity further from the quake's epicenter off the coast, this method could be used in the future to identify whether a large earthquake is involved, which could trigger a tsunami.

"However, there is still a long way to go," said Wang. "Today's measuring instruments are not yet sensitive enough, and the environmentally induced interference signals are too great for the PEGS signals to be directly integrated into a functioning tsunami early warning system."

An earthquake causes a sudden rock-mass redistribution through fault rupture and generates seismic waves that cause bulk density variations propagating with them. Both processes induce gravity perturbations whose signals propagate with the speed of light and therefore can arrive at remote stations earlier than the fastest elastic P wave. In turn, the gravity perturbations generate secondary seismic sources everywhere within the earth, a part of which around the observation locations can cause ground motion prior to the direct P wave arrival there, too. Recently, these so-called prompt elasto-gravity signals (PEGS) of large seismic events like the 2011 Mw 9.1 Tohoku earthquake have been detected using the data recorded by broadband seismometers and superconducting gravimeters. Though the physics of the PEGS has been well understood, the tools used so far for a realistic modelling of them are complicated and computationally intensive. In this study, we present a new and straightforward approach that solves the full-coupled elasto-gravitational boundary-value problem more accurately, but no more complicated than to compute synthetic seismograms in a conventional way. Using the new tool, we simulate the complete PEGS of the 2011 Tohoku earthquake based on a realistic kinematic finite-fault source model. Furthermore, we present a comprehensive investigation of potential uses of PEGS in modern seismology. As an example, we show particularly that the major source parameters like the moment magnitude, the rupture duration and the focal mechanism of a megathrust earthquake like the 2011 Tohoku earthquake can be estimated robustly using the measured PEGS data.