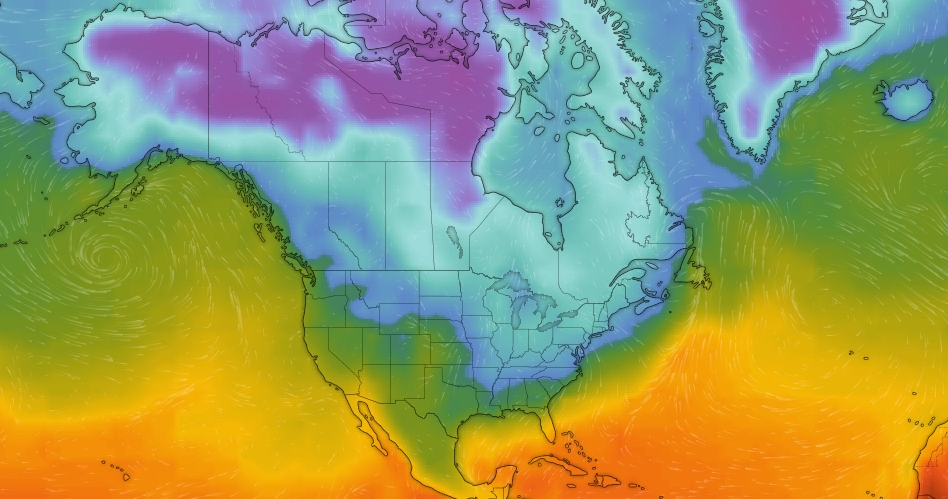 A significant early-season Arctic airmass will produce areas of snow and freezing rain, and gusty winds across the central and eastern U.S. into next week. Widespread snow from the Plains to the Northeast could fall as far south as Tennessee, with the heaviest snow likely to fall from upstate New York to northern New England. Numerous cold temperature records will be possible. The counterpoint to these wintry conditions will be continued warm temperatures in the West with air stagnation issues in the interior Northwestern states.

"An expansive area of high pressure originated from Siberia has traveled across the Arctic Ocean and is now dominating western Canada," NWS forecaster Kong noted 08:08 UTC on November 10, 2019.

"The leading edge of arctic air associated with the high pressure system is now edging southward across the northern Plains. This will spread the coldest temperatures so far this season across the eastern two-thirds of the country during the next few days.

"In fact, record cold high temperatures are forecast for Monday for many locations across the upper Midwest, with below-freezing temperatures reaching central Texas by Tuesday morning. This will make it feel like in the middle of January rather than November.

Snowfall from a fast-moving weather system will engulf portions of the Plains, Midwest, and Northeast. This round of early-season snow has already formed from Montana into the Dakotas, which will rapidly spread farther east through the Midwest by Monday, November 11. A blast of cold air will follow behind the snow which is likely to break records in the central and eastern states by the middle of the week.

Arctic air pushing into the U.S. early next week may create sub-zero temperatures in parts of the Dakotas and Minnesota, likely will break hundreds of cold temperature records near and east of the Mississippi River, and bring freezes down to parts of the Gulf coast. pic.twitter.com/tolZMNDLWn

The National Weather Service in the northern High Plains and the northern Rockies have issued winter weather advisories, while winter storm watches are in place from the Adirondacks, New York, into northern Vermont, as well as Great Lakes.

Snow is forecast to expand into the Mississippi Valley and Great Lakes by Sunday night, November 10. Some sleet may mix in over parts of Kansas, Missouri, and central Illinois.

Monday showers will be more widespread and heavier as moisture from the Gulf of Mexico reaches the cold front in the Midwest on Veterans Day.

Snow would be most likely from the southern Great Lakes into upstate New York and northern New England.

Rains may become sleet as snow from Oio Valley falls to the Ozarks. By the evening on November 11, snow may be heavier from western and central New York to northern England, as well as parts of Tennessee Valley and the Appalachians.

Widespread snow is expected to end across the Midwest on the same day, but streamers of lake-effect snow are likely to form south and east of the Great Lakes.

Through Tuesday and Wednesday, low pressure is expected to track inland of the Northeast Seaboard – most of the major cities along the Interstate 95 corridor will see little or no snow accumulation.

The most significant snow will fall to the north and west portions of northern New England and upstate New York. Snow and wrapping around the intensifying low-pressure system may continue.

Northern New York could see more than 254 mm (10 inches) of snow. Some light ice accumulations are likely in parts of northern New England from southern Maine to New Hampshire before the precipitation ends.

Moderate snowfall is possible in the High Plains, southern Great Lakes, and the central Appalachians. The major cities on the East Coast may receive little to no accumulation. Light snowfall is likely in the mid-Mississippi and Tennessee Valleys, including in St. Louis, Louisville, Nashville.