Dorian reached hurricane status at landfall in U.S. Virgin Islands at 18:00 UTC on August 28 where a weather station recorded winds of 132 km/h (82 mph) and a gust of 179 km/h (111 mph). The system is expected to strengthen into a major hurricane during the next couple of days and reach Florida on Tuesday, September 3.  Because of the uncertainty in the track of this storm, every resident along the East Coast needs to be ready​. Dorian is the second hurricane of the 2019 Atlantic hurricane season.

This general motion is expected to continue through Friday, August 30. A west-northwestward motion is forecast to begin Friday night (AST) and continue into the weekend.

On this track, Dorian should move over the Atlantic well east of the southeastern and central Bahamas today and on Friday, and approach the northwestern Bahamas on Saturday, August 31. 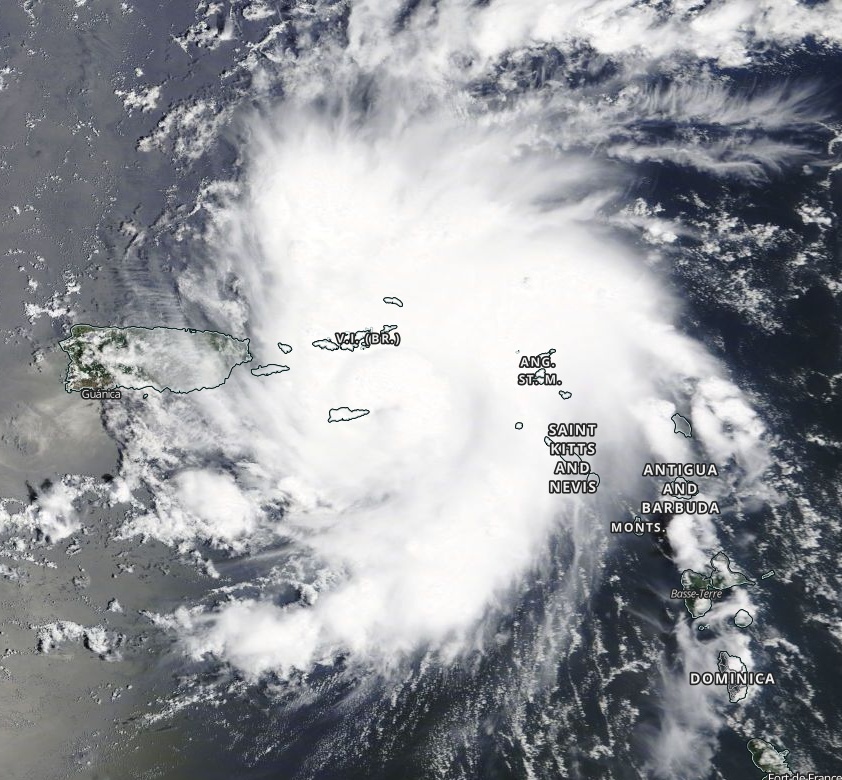 Dorian is expected to produce the following rainfall accumulations this weekend into early next week:

This rainfall may cause life-threatening flash floods.

Swells around the U.S. and the British Virgin Islands and Puerto Rico should gradually diminish today. Swells are likely to begin affecting the east-facing shores of the Bahamas and the southeastern United States coast during the next few days. 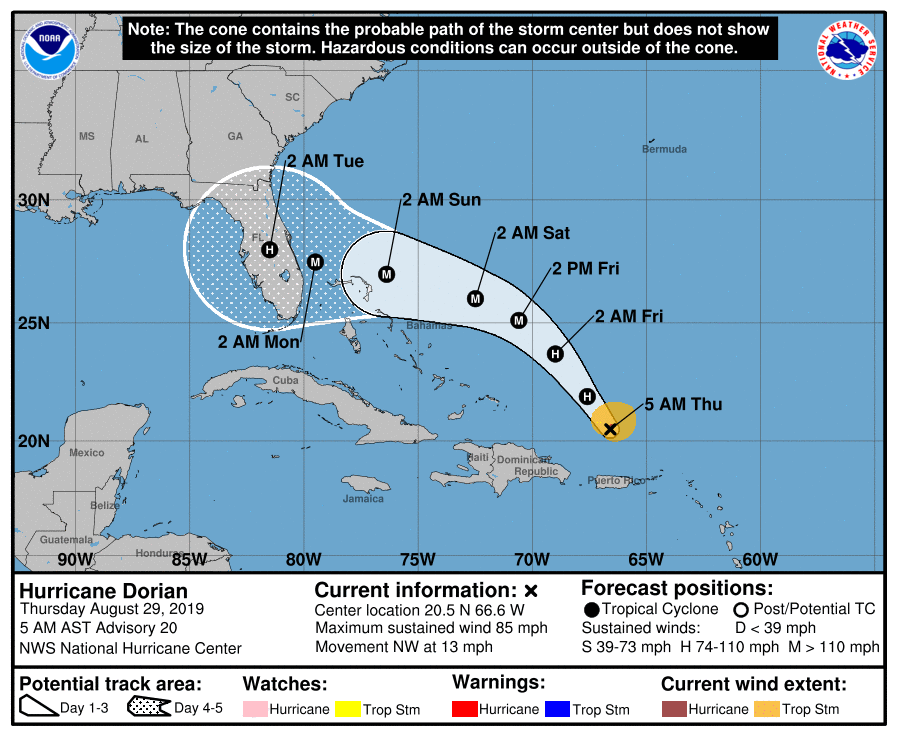 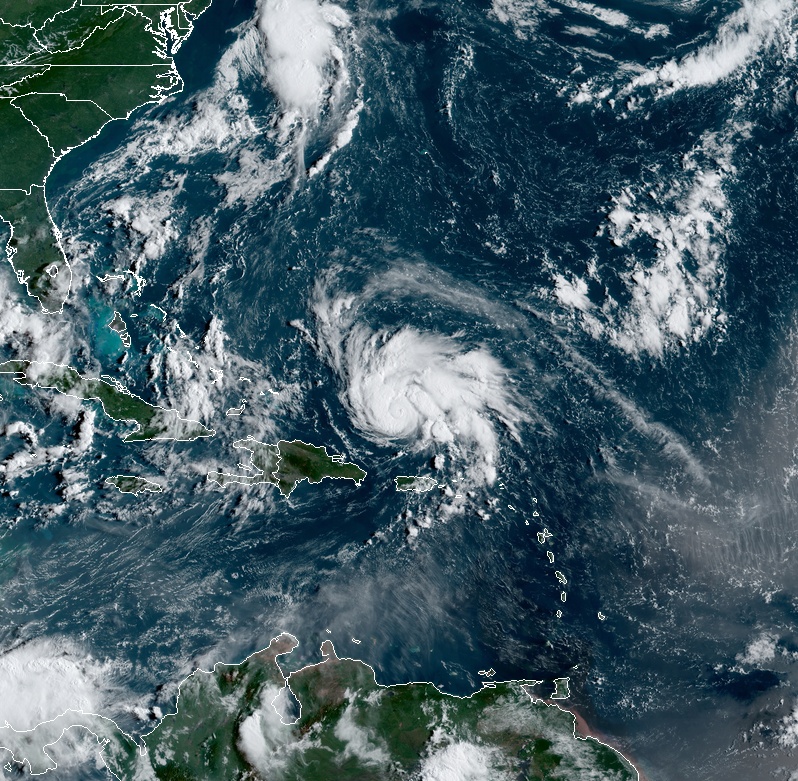 Confidence in the track forecast is fairly high for the first 48 hours, with Dorian expected to continue moving northwestward and then begin to turn west-northwestward between mid-level ridging to the north and a mid- to upper-level low retrograding westward across the Straits of Florida, NWS forecaster Berg noted:

The models, and their ensembles, continue to diverge after 48 hours and have not really budged from their respective solutions compared to yesterday.

The GFS is a northern outlier from the rest of the guidance, showing a weaker ridge and bringing Dorian close to the Florida/Georgia border, while the UKMET and ECMWF models show stronger ridges and remain the southernmost solutions near South Florida.

Given the spread in the guidance, the new NHC forecast blends the previous forecast with the simple multi-model consensus aids and the HCCA and Florida State Superensemble aids, and it actually ends up in a position very close to the tightly clustered global model ensemble means.

The most notable change in the new forecast is that it's a little bit slower than the previous one as Dorian approaches Florida.

Various shear analyses are indicating 10-15 kt of southwesterly shear over Dorian at the moment, but the global models show this shear diminishing within 12-24 hours.

With lower shear and very warm waters, all of the intensity models forecast Dorian to begin strengthening again soon, and rapid intensification could occur. The updated NHC intensity forecast has been increased from the previous one and most closely follows the HCCA and Florida State Superensemble aids during the first day or two.

After 48 hours, the official forecast is near or just above the intensity consensus, but it's still lower than the solutions shown by the HCCA, Florida State Superensemble, and the HWRF. Dorian is likely to reach major hurricane strength in the next day or two and is forecast to maintain that status until it reaches land.

1. The risk of dangerous storm surge and hurricane-force winds later this week and this weekend continues to increase in the central and northwestern Bahamas and along the Florida east coast, although it is too soon to determine where these hazards will occur. Residents in these areas should ensure they have their hurricane plan in place and not focus on the exact forecast track of Dorian's center.

2. Heavy rains are expected to occur over portions of the Bahamas, Florida, and elsewhere in the southeastern United States later this week and into early next week.

Governor Ron DeSantis issued Executive Order 19-189 on August 28, declaring a state of emergency for counties in the path of Hurricane "Dorian."

DeSantis is urging all Floridians on the East Coast to prepare for impacts, as the latest forecasts from the National Hurricane Center project Hurricane "Dorian" will make landfall on Florida’s East Coast as a major hurricane.

The State Emergency Operations Center will activate to a Level 2 on Thursday morning, enhancing the coordination between federal, state and local emergency management agencies.

"Today, I am declaring a state of emergency to ensure Florida is fully prepared for Hurricane Dorian," said DeSantis. "It’s important for Floridians on the East Coast to monitor this storm closely. Every Florida resident should have seven days of supplies, including food, water and medicine, and should have a plan in case of disaster. I will continue to monitor Hurricane Dorian closely with emergency management officials. The state stands ready to support all counties along the coast as they prepare."

"Because of the uncertainty in the track of this storm, every resident along the East Coast needs to be ready," said Florida Division of Emergency Management Director Jared Moskowitz.

"As updates come out, it’s important that Floridians continue to pay attention to media and local officials as the track of this storm has been changing and can continue to change rapidly. By having an Executive Order in place and by activating the State Emergency Operations Center to a Level 2, we are fully prepared to support any community that might be impacted."