More than 500 long-period (LP) seismic events were detected under the SE flank of Teide volcano in Tenerife, Canary Islands on June 14, 2019, indicating the injection of magmatic fluids in the volcanic-hydrothermal system of Tenerife Island.

The swarm took place from 16:09 to 17:50 UTC on June 14, 2019, with the largest earthquake measuring 1.8 at a depth of 10 km (6.2 miles). This is one of the greater amplitude LP events since the launch of the Canary Seismic Network (RSC) in November 2016, the Volcanological Institute of the Canary Islands (INVOLCAN) reports.

"Its characteristics are similar to the seismic swarm recorded on October 2, 2016, when more than 700 long-period seismic events were recorded in 5 hours," INVOLCAN said.

"The origin of these seismic swarms is probably related to the injection of magmatic fluids in the volcanic-hydrothermal system of Tenerife Island." 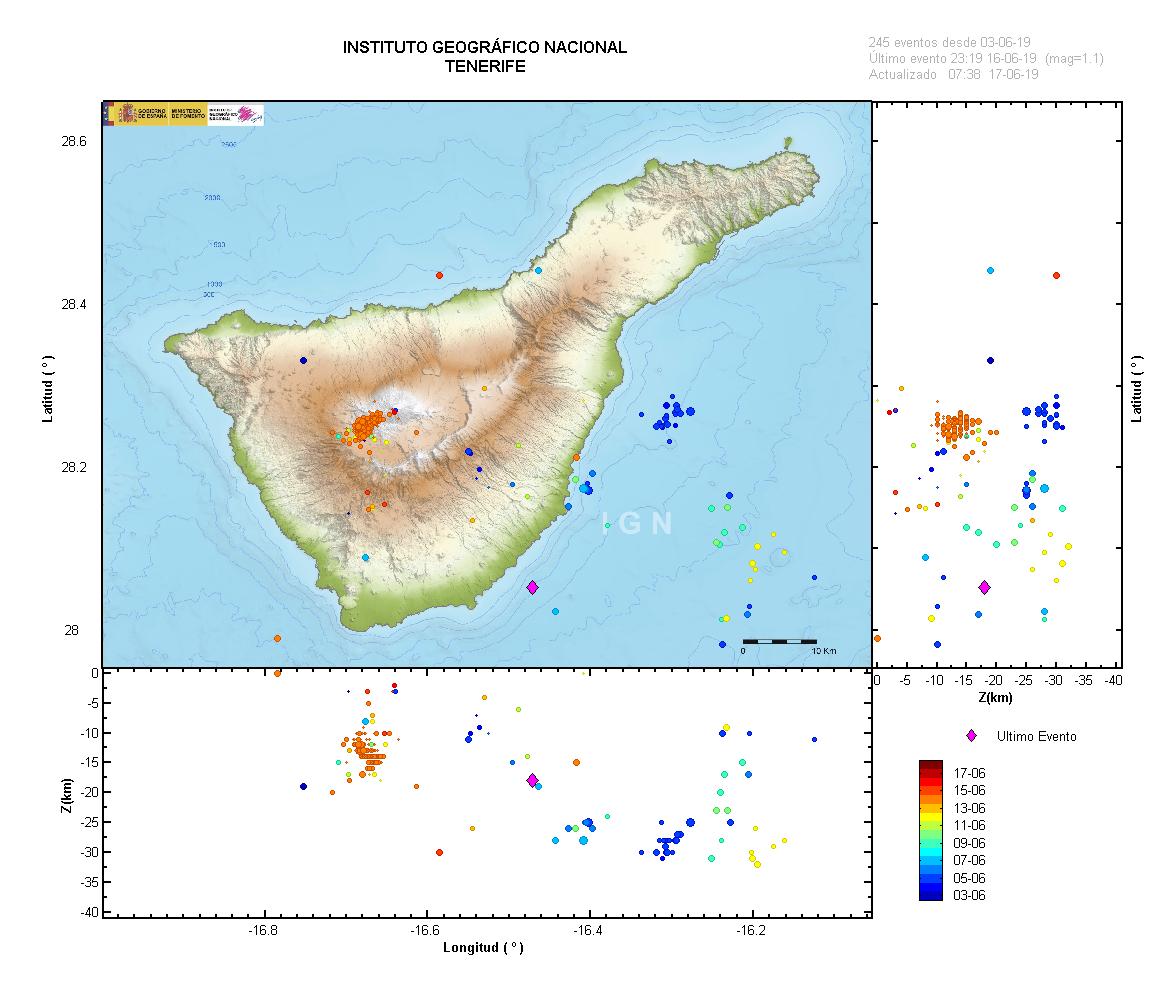 This activity is in line with the seismicity recorded on the island of Tenerife during the last three years, the institute said.

The absence of significant deformations of the terrain makes the direct involvement of a superficial magmatic system unlikely. In the short term, it can not be excluded that more earthquakes of small magnitude and of an entity similar to the one that occurred on January 6, 2017 may occur. On the other hand, the occurrence of earthquakes capable of generating short-term damage can be excluded, the institute said.

"This activity is normal in active volcanic areas such as Teide-Pico Viejo," IGN (Spain's National Geographic Institute) said. "To this day, there are no other indicators that can assume short-term activity."

The large triangular island of Tenerife is composed of a complex of overlapping Miocene-to-Quaternary stratovolcanoes that have remained active into historical time.

The NE-trending Cordillera Dorsal volcanic massif joins the Las Cañadas volcano on the SW side of Tenerife with older volcanoes, creating the largest volcanic complex of the Canary Islands.

Controversy surrounds the formation of the dramatic 10 x 17 km (6.2 x 10.5 miles) Las Cañadas caldera, which is partially filled by Teide stratovolcano, the highest peak in the Atlantic Ocean.

The origin of the caldera has been variably considered to be due to collapse following multiple major explosive eruptions or as a result of a massive landslide (in a manner similar to the earlier formation of the massive La Orotava and Guimar valleys), or a combination of the two processes.

The most recent stage of activity beginning in the late Pleistocene included the construction of the Pico Viejo and Teide edifices.

Tenerife was perhaps observed in eruption by Christopher Columbus, and several flank vents on the Canary Island's most active volcano have been active during historical time.

This volcano is located within the Teide National Park, a UNESCO World Heritage property.