The center of Tropical Storm "Rosa" was located about 225 km (140 miles) WSW of Punta Eugenia, and 525 km (325 miles) SSW of San Felipe, Mexico at 09:00 UTC on October 1, 2018. Rosa is expected to produce heavy rain across Baja California and northwestern Sonora, Central and Southern Arizona and the rest of the Desert Southwest, Central Rockies and Great Basin. Life-threatening flash flooding is expected as well as dangerous debris flows and landslides in mountainous regions.

On the forecast track, the center of Rosa will approach the central and northern Baja California later today and then move across the peninsula into the northern Gulf of California tonight (PDT). 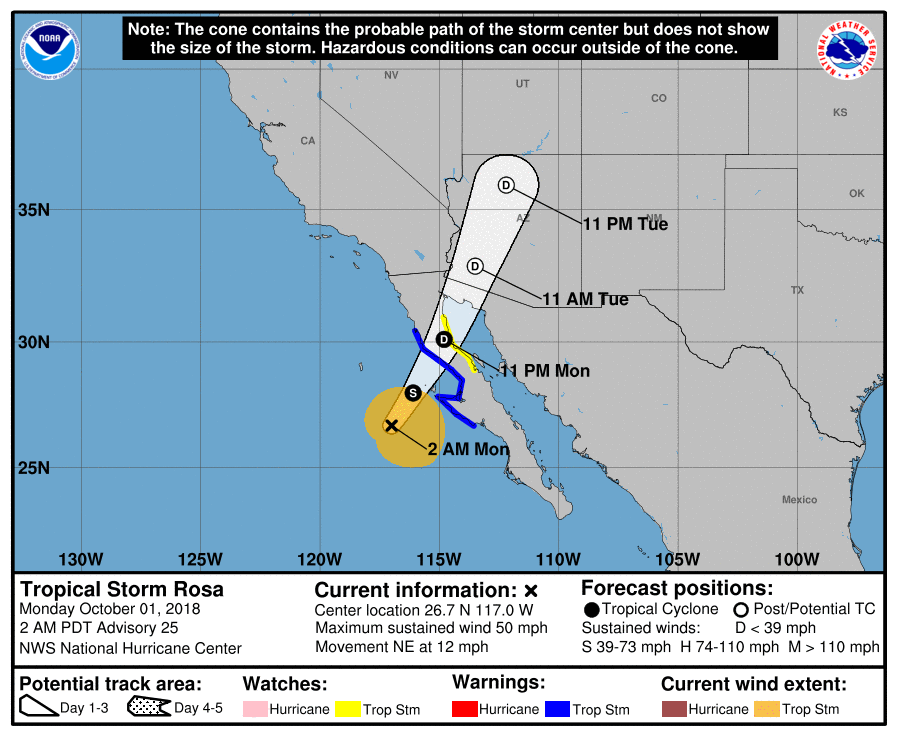 Rosa is expected to produce 77 – 153 mm (3 to 6 inches) of rain across Baja California and northwestern Sonora, with isolated 254 mm (10 inches) possible.

Central and Southern Arizona can expect 51 – 102 mm (2 to 4 inches), and isolated totals of 153 mm (6 inches) possible in the mountains of Central Arizona.

Swells generated by Rosa will affect portions of the coasts of southwestern Mexico, most of the west coast of the Baja California peninsula, and southern California through Tuesday. These swells are likely to cause life-threatening surf and rip current conditions.

Rosa's remnants are expected to move across the Desert Southwest on Tuesday, October 2, producing heavy rain and bringing flash flood conditions to the Desert Southwest, Great Basin, and Central/Southern Rockies through Wednesday. There is a moderate risk of excessive rain in portions of Arizona today and tomorrow.

"Heavy rainfall has made a return to much of Arizona and southeastern California as Tropical Storm 'Rosa' tracks towards the northeast, and it is forecast to make landfall on the northern Baja California coast Monday evening," NWS said early October 1.

"There will be enough deep layer moisture to support widespread 25 – 77 mm (1 to 3 inches) rainfall amounts through Tuesday night, with some additional showers and thunderstorms likely falling thereafter. This moisture will continue spreading inland across eastern Nevada, Utah, and western portions of Colorado and New Mexico."

Flash flood watches are currently in effect for many of those areas, and the Weather Prediction Center currently has a moderate risk of excessive rainfall for parts of Arizona where the threat of flash flooding is greater.