Tropical Storm "Isaac" is moving west over the Atlantic Ocean toward the Caribbean and is expected to pass over Dominica Island (Lesser Antilles) during the afternoon (UTC) hours of September 13,  2018. The system is bringing heavy rain, strong winds and storm surge to Dominica, Martinique and Guadeloupe. Life-threatening flash flooding is expected. Preparedness actions are ongoing in the countries with deployment of teams under the Regional Response Mechanism led by the Caribbean Disaster Emergency Management Agency (CDEMA).

This general motion is forecast to continue today with a decrease in forward speed over the Caribbean Sea. 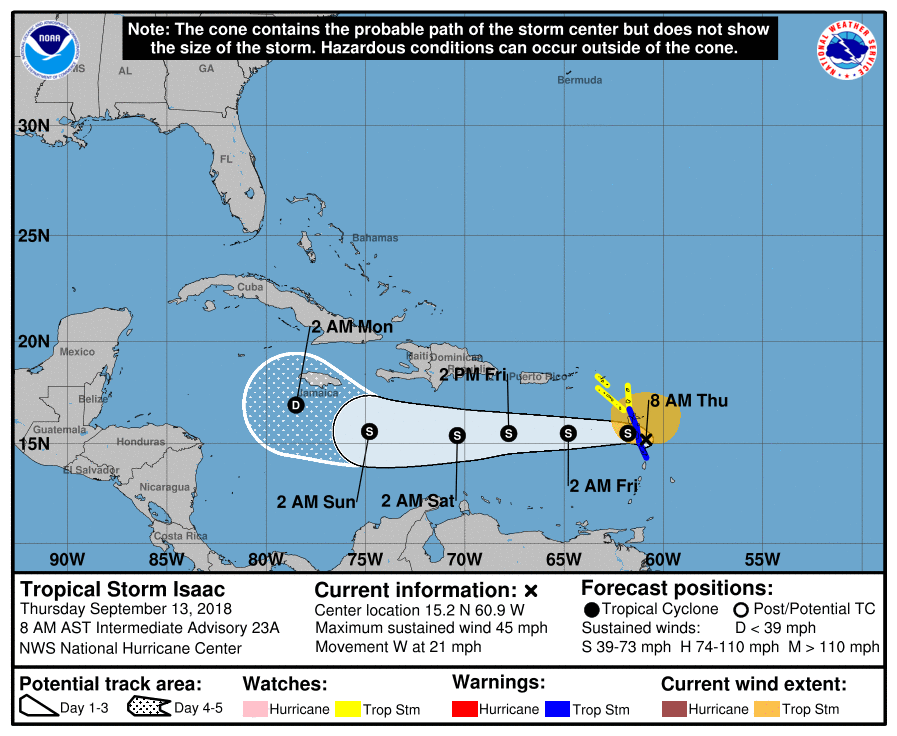 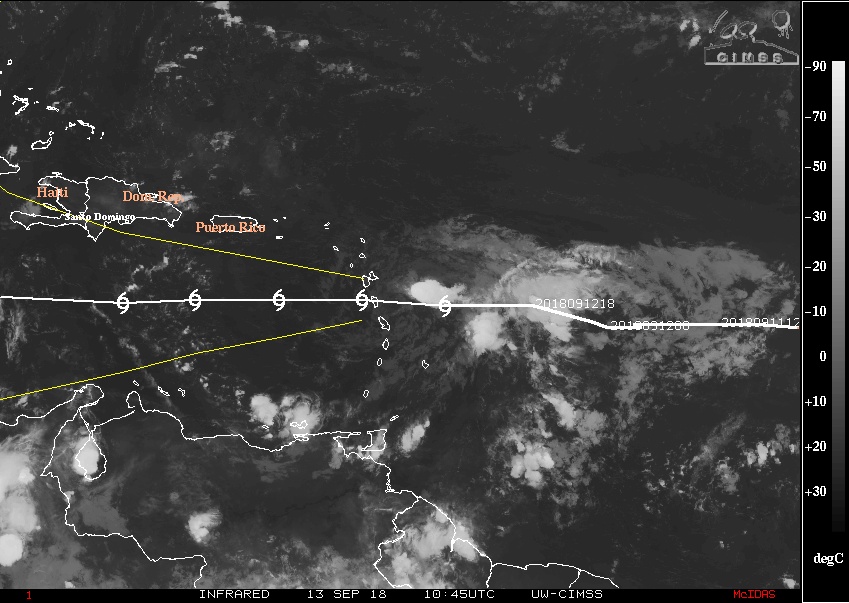 A Tropical Storm Warning is in effect for Martinique, Dominica and Guadeloupe

A Tropical Storm Watch is in effect for Antigua, Barbuda, Montserrat, St. Kitts and Nevis, Saba and St. Eustatius and St. Martin and St. Maarten.

The storm is expected to produce total rainfall accumulations of 51 to 102 mm (2 to 4 inches) with isolated amounts up to 152 mm (6 inches) across Martinique, Dominica, and Guadeloupe, especially over elevated terrain.

Rainfall of 13 to 38 mm (0.5 to 1.5 inches) with isolated amounts to 76 mm (3 inches) are forecast across Puerto Rico and the southern United States Virgin Islands, with up to 25 mm (1 inch) anticipated across the remaining Windward and Leeward Islands. This rainfall may cause dangerous flash flooding.

Some coastal flooding is possible in areas of onshore winds. Near the coast, the surge will be accompanied by large waves.

Swells generated by Isaac are affecting portions of the Lesser Antilles. These swells are likely to cause life-threatening surf and rip current conditions. 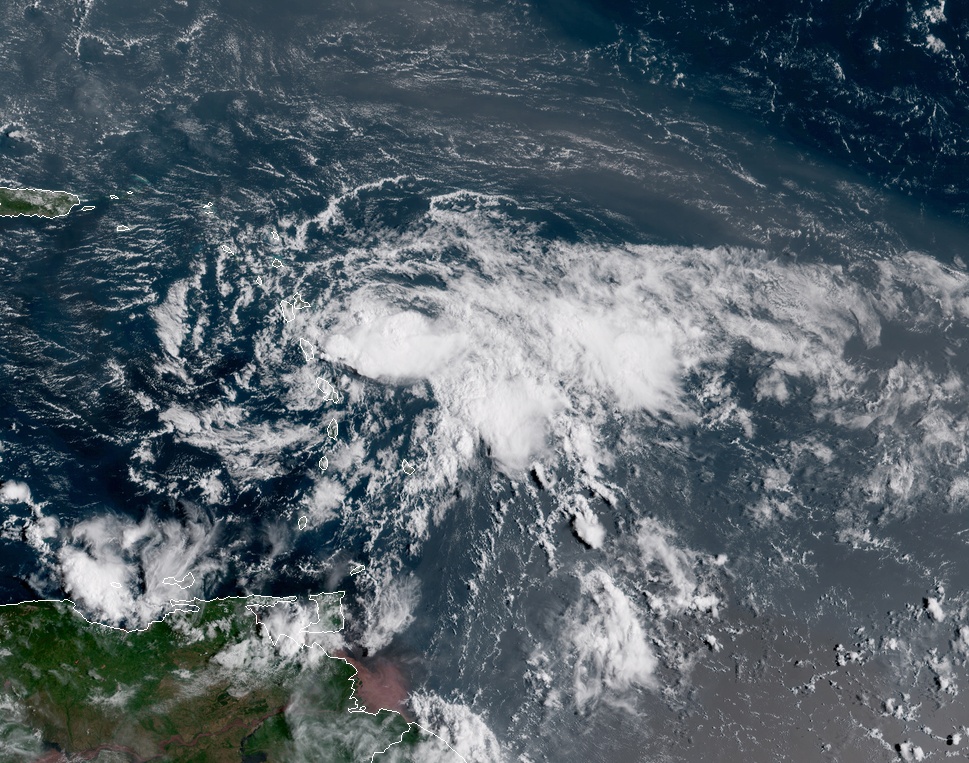 Meanwhile, the center of extremely dangerous Hurricane "Florence" is getting very close to North Carolina, U.S.

Heavy rainbands with tropical-storm-force winds are spreading over the North Carolina Outer Banks, NHC said 13:00 UTC. Life-threatening storm surge and rainfall is expected. Florence has maximum sustained winds of 175 km/h (110 mph) and minimum central pressure of 957 hPa. This placed it on the upper edge of Category 2 hurricane on the Saffir-Simpson scale. 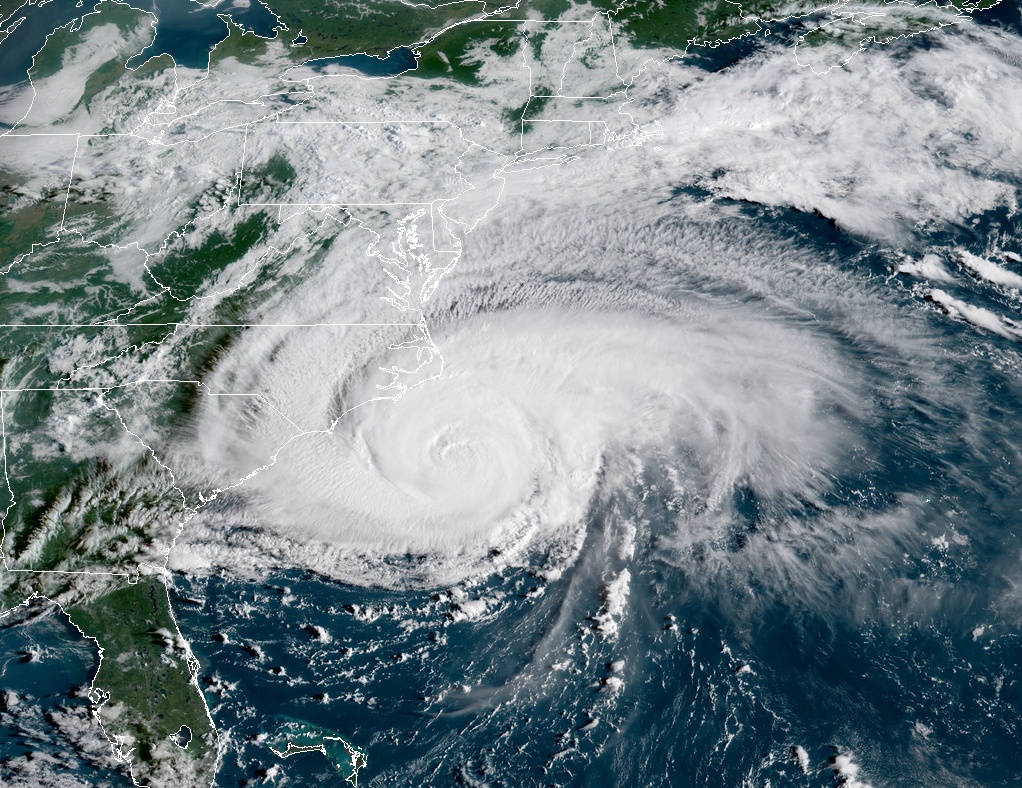 A state of emergency has been declared in Georgia, South Carolina, North Carolina, Virginia and Maryland in preparation for significant rainfall, flooding storm surge and damaging winds.