During the first half of August 2018, reports of noctilucent clouds to Spaceweather.com have tripled compared to the same period in 2017 and researchers at the University of Colorado may have figured out why.

"There has been an unexpected surge of water vapor in the mesosphere," Lynn Harvey of Colorado's Laboratory for Atmospheric and Space Physics (LASP) said.

This plot, which Harvey prepared using data from NASA's satellite-based Microwave Limb Sounder (MLS) instrument, shows that the days of late July and August 2018 have been the wettest in the mesosphere for the past 11 years: 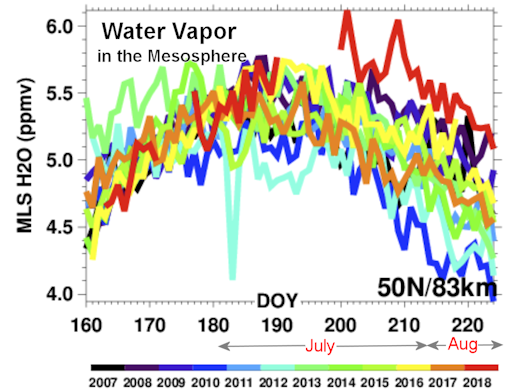 In addition to being extra wet, the mesosphere has also been a bit colder than usual, Dr. Tony Phillips of the SpaceWeather.com reports. The combination of wet and cold has created favorable conditions for icy noctilucent clouds.

Harvey and her colleagues are still working to understand how the extra water got up there, Phillips continues. "One possibility involves planetary wave activity in the southern hemisphere which can, ironically, boost the upwelling of water vapor tens of thousands of miles away in the north, but the phenomenon could also be linked to solar minimum, now underway."

"It is notable that the coldest and wettest years in the mesosphere prior to 2018 were 2008 – 2009, the previous minimum of the 11-year solar cycle," Phillips concludes.