One person was killed after a strong cold front hit Australia's southeast on August 10. The storm produced strong winds across Victoria, with gusts up to 125 km/h (78 mph), downing trees and damaging buildings and cars.

One person was killed after a large tree crushed his car on the Warburton Highway at Lilydale.

Victoria SES said they received 320 requests for assistance within 24 hours. 235 for fallen trees and 72 for damaged buildings, 5 for floods, and 3 for rescues.

Some 5 200 customers were left without power.

A severe storm hit parts of the Carolinas on August 8, dropping heavy rain and hail and producing strong winds.

About five to six boats capsized on Lake Norman, tossing people into the water.

Officials said 20 people were rescued from the water. Nobody was injured.

The Director-General of Health, Graça Freitas, said that there were more than 500 death, between August 5, 6 and 7, that could be related to the heatwave that hit the country in recent days.

Stressing that it is necessary to determine the causes of these deaths, and exercise caution in analyzing the data, she stated that there was a daily variation of more than 500 recorded deaths, that required further analysis, with the greatest impact on August 5 through 7.

Thunderstorms with severe straight line winds, in excess of 140 km/h (87 mph) at several locations, and large hail were reported in the morning and early afternoon in central and northeastern France, Severe Weather Europe reports. Meanwhile, persistent training storms produced major flash flooding in parts of southern and southeastern France. Activity then moved into western, north and central Germany in the afternoon.

One man is missing in France after the Ardeche river burst its bank, sweeping away a car he was taking shelter in.

1 600 people were evacuated from Gard and 50 000 homes lost power in the department of South and Southeast.

Vigorous monsoon rains left a trail of destruction across Kerala between August 8 and 10, killing at least 29 people and forcing 53 501 to evacuate.

For the first time in the last 26 years, all five shutters of the Cheruthoni dam – a part of Idukki hydel reservoir system – were opened. This dam is one of the largest arch dams in Asia. In addition, more than 24 dams across the state have also been opened to drain out excess water.

At least 60 tourists, of which 20 foreigners, are stranded at a resort in the popular tea county of Munnar in Idukki district after landslides blocked roads leading to resort.

The last eruption of this volcano took place in 1918, making Katla long overdue for an eruption.

A wet pattern is in store for portions of Texas and into Oklahoma the next few days as a front stalls across the region and moisture pools along the boundary, NWS warned August 10.

Heavy to excessive rainfall possible. WPC has highlighted the region within a marginal to slight risk for flash flooding through the next three days. Heavy rainfall is also expected across portions of the Mid-Atlantic as the same boundary remains stalled across that region as well. 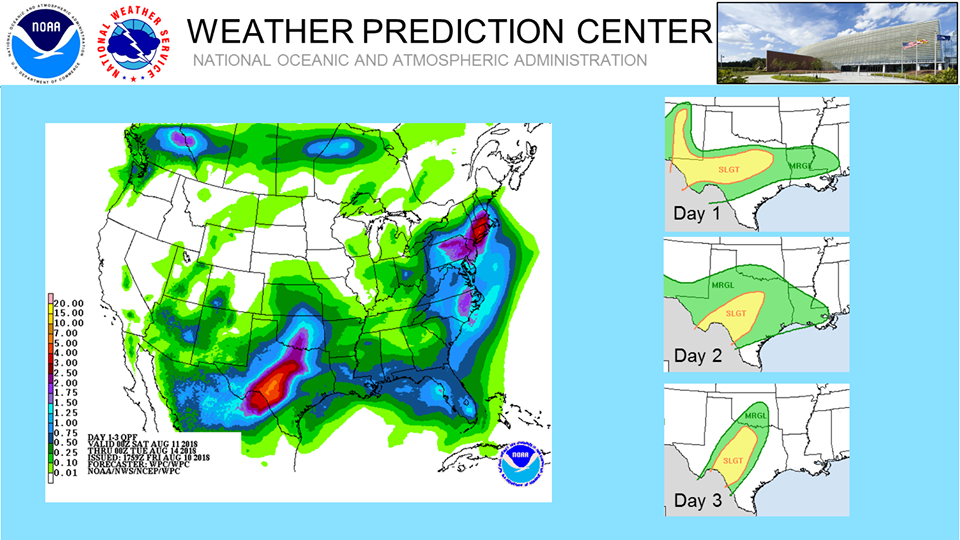 Two people were injured after a large sinkhole opened in southern Quebec's town of Lac-Brome on August 9.

Police say the crater was caused by a landslide due to water from a roadside ditch that overflowed from heavy rain.

A woman in her 70s was driving in the Eastern Townships at around 3:30 a.m. when her vehicle plummeted more than 3 metres. https://t.co/xpngDeTohG pic.twitter.com/0rhX0nB1jp

A small lava pond remains in the Fissure 8 cone, HVO reports August 10. Observations yesterday (August 9) show the pond to be largely crusted over with only minor areas of incandescence. Fissure 8, and the channel leading from Fissure 8, show no sign of reactivation.

Fissures 9, 10, and 24 up-rift of Fissure 8, and the down-rift Fissures 13, 23, 3, 21 and 7 continue to steam, but are not incandescent. Lava is oozing at several points along the Kapoho Bay and Ahalanui coastline creating wispy laze plumes.

Although the lull in LERZ activity continues, it is common for eruptions to go through periods of diminished output, or to pause completely, only to return with renewed vigor days or weeks later, or longer.

Resumption of the activity on the LERZ could occur at any time, and residents should remain informed and heed Hawaii County Civil Defense messages and warnings.

Unrest continues at Cleveland volcano, the Alaska Volcano Observatory reports August 10. Moderately elevated surface temperatures were observed on one day over the past week and degassing at the summit was seen at times in web camera images.

No significant activity was detected in seismic and infrasound (pressure) sensor data throughout the week. Future explosive activity is likely and is expected to occur without warning. Previous explosions have produced hazardous conditions primarily near the volcano, but occasionally they have been large enough to produce a drifting ash cloud.

This brilliant close-range view of a waterspout was captured in Formentera, the Balearic Islands on August 10. 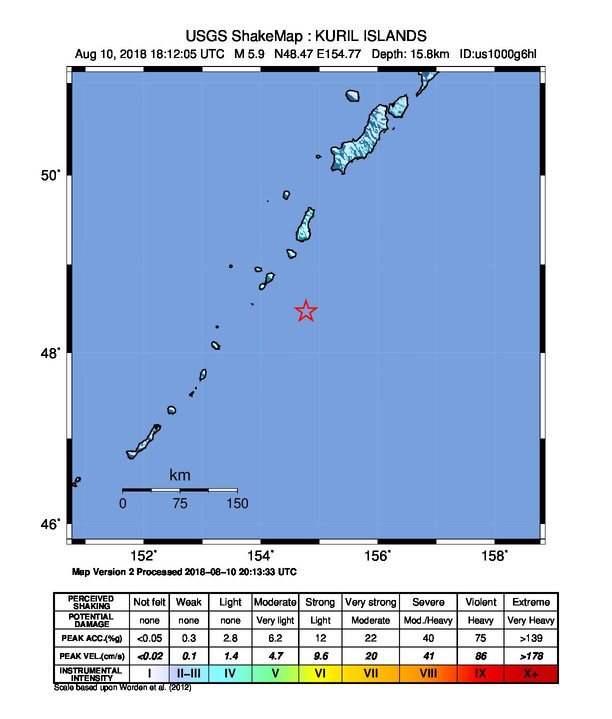 A partial solar eclipse will take place from 06:40 to 12:38 UTC on August 11, 2018. While it will be visible in parts of northeast Canada, Greenland, extreme northern Europe, and northern and eastern Asia, the best place to see it will be northern Russia with 68% coverage.

The northern hemisphere 2018 noctilucent season is still going strong this August, with four times more NLC reports than in the same period in 2017.

So far in August 2018, noctilucent clouds are being reported to Spaceweather.com four times as often as during the same period in 2017.

Noctilucent clouds captured by Gordon Mackie on August 10, 2018, at Caithness, Scotland. Via SpaceWeather.com