According to the Korea Meteorological Agency, the strongest cold wave of the 2017/18 season began Monday, December 11, 2017, and will last throughout this week. 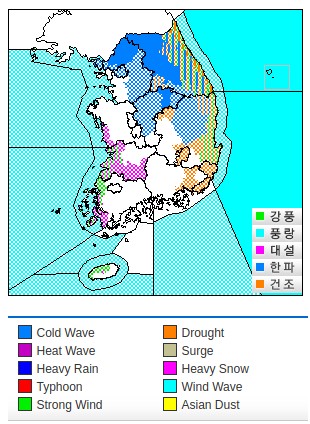 In addition, a Strong Wind Warning is in effect for Ulleungdo.Dokdo for Tuesday, Cold Wave warning is effect for Pyeongchang flatland, Hoengseong, Cheorwon, Hwacheon, Hongcheon flatland, Chuncheon and Inje flatland.

"Due to the influence of a continental anticyclone expanding from northern China, most regions in Korea will see clear skies until Wednesday, December 13. The western coast of South Chungcheong Province, Jeolla provinces and Jeju Island, however, will see partially cloudy skies and snow," the KMA said, as reported by The Korea Herald.