On Saturday, March 22, 2014, a devastating landslide roared across the North Fork of the Stillaguamish River, near Oso, Washington. The landslide killed 43 people as it plowed through the Steelhead Haven neighborhood. When it stopped, after crossing the river, the neighborhood, and State Route 530, the Oso landslide had traveled 1.4 km (0.86 miles).

That's a remarkable distance, says Brian Collins of the USGS, given the geologic and geographic context. On Tuesday, October 24, 2017, at the GSA Annual Meeting in Seattle, Collins and co-author Mark Reid presented the results of mapping that will help explain how the Oso landslide moved so far across the valley.

In addition, Collins says, the work may also help settle debate over the mobility sequence of the landslide, and whether it moved as two sequential slides, or as one. "Our observations suggest it moved as one landslide," he says. 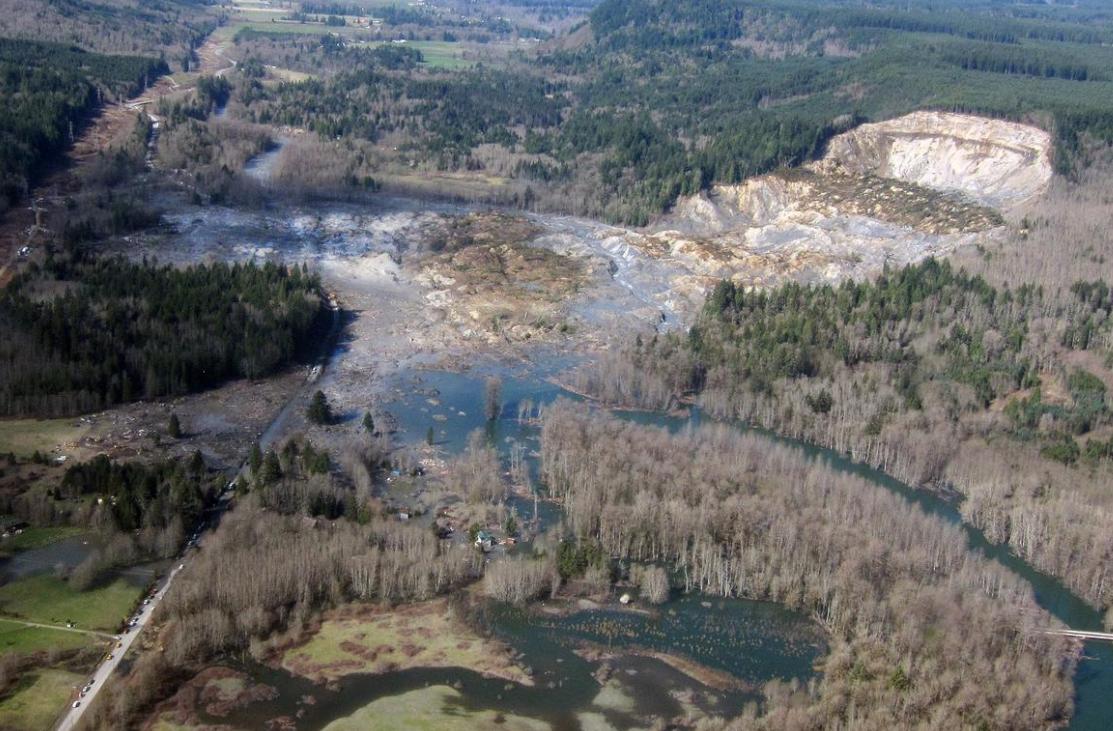 To explore the landslide's mobility, Collins and Reid focused on hummocks deposited during the landslide. Hummocks are intact blocks of landslide debris that have been transported from their source area. The Oso hummocks, as tall as 20 m (65 feet), cover 0.6 km2 (0.23 mi2), burying the former site of Steelhead Haven. They consist of blocks of horizontally layered glacial deposits, often complete with the overlying forest floor. In numerous cases, trees and ferns remained upright and alive as they were rapidly transported south during the landslide.

"Hummocks can show the style of motion that the landslide underwent once initiated," explains Collins. "At Oso, we were able to reconstruct the mechanism under which the source area turned into the deposit by manually digging into the landslide about 1 500 times in order to identify the materials forming the hummocks." That work revealed that the hummocks were rafted across the valley on a liquefied base layer.

Collins presented what the USGS has learned about the 2014 Oso landslide, including the liquefied base layer, the intact hummock blocks, and hundreds of telltale liquefaction features such as sand boils that give evidence of the high pore pressures at the base of the slide.

In the next talk, Reid will share detailed descriptions and discuss implications of the hummocks and liquefaction features mapped within the hummock field. Those features include "slosh pits" and sand boils, some of which erupted through over seven meters of deposits. The team mapped these features within months of the slide. A year later, the liquefaction features had disappeared, erased by erosion and new vegetation.

Source: The Geological Society of America