The Marine Meteorological Center of Valparaiso has issued an abnormal tide warning for the entire coast of Chile, from the Gulf of Penas in the country's south to the northern city of Arica. It is expected that these conditions will begin to manifest on Tuesday, August 22, 2017 and last until Sunday, August 27, reaching its greatest development at the respective high tide hours and according to local wind forecast.

This is the ninth such categorized event so far this year, the agency reports in a warning issued August 21. 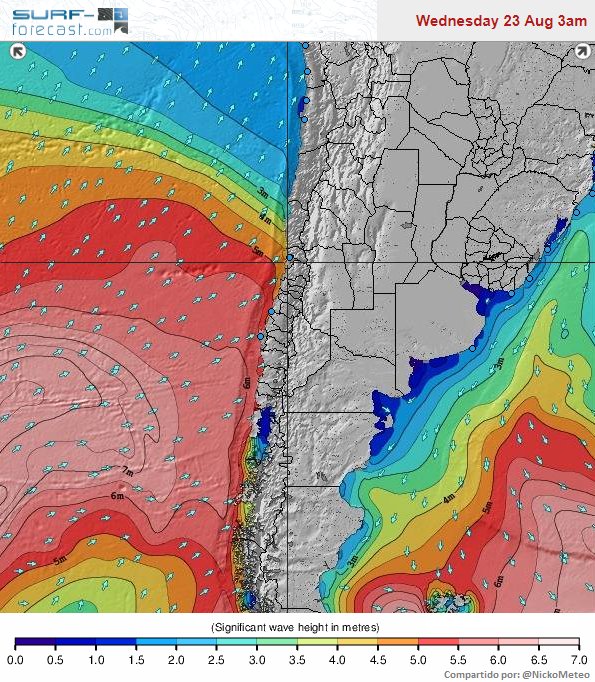 "We have categorized this event as abnormal due to the height of the wave, which could reach 5 meters (16.4 feet) during high tides," said Lieutenant Felipe Rifo Esposito, Head of the Maritime Meteorological Center of Valparaiso. "One of the factors for this categorization is the New Moon on August 21, aligning with the Sun and Earth and generating the highest tides of the month."

"Since the swells will come from the southwest, we expect to most intense conditions to occur along our northern coast, where the bays are unprotected from that direction," Espósito said.

Authorities warned all residents that it is necessary to act with prudence and caution, to respect the established rules and avoid coastal traffic and rocky areas. "Do not enter the sea during swells as beaches will be unsuitable for swimming, and do not participate in nautical and sports activities without proper authorization."

Abnormal conditions are expected to arrive at the coast on the following dates:

and last up to: