At least nine people have been killed and one is still missing after a wall of water swept away family and friends at the popular Cold Springs Swimming Hole near Payson in central Arizona on Saturday, July 15, 2017.

The flash flood was caused by a severe monsoon thunderstorm that hit 13 km (8 miles) upstream along Ellison Creek, in a remote area burned by a recent wildfire, dumping 38 mm (1.5 inches) of rain within 60 minutes.

Gila County Sheriff’s Detective Sgt. David Hornug said the National Weather Service had issued a flash flood warning about 90 minutes before, adding that unless the swimmers had a weather radio out there, they wouldn't have known about it. "There is no cell phone service out here," Hornug said.

There were reportedly 14 swimmers (family and friends) at the swimming hole when swift, 1.8-m-high (6 feet) floodwaters mixed with trees and other debris came rushing in. Sadly, only 4 of them survived and were transported to a nearby hospital with hypothermia.

"They had no warning. They heard a roar, and it was on top of them," Water Wheel Fire and Medical District Fire Chief Ron Sattelmaier said.

The waters gushed for about 10 minutes before receding in the narrow canyon, Sgt. Hornug said. 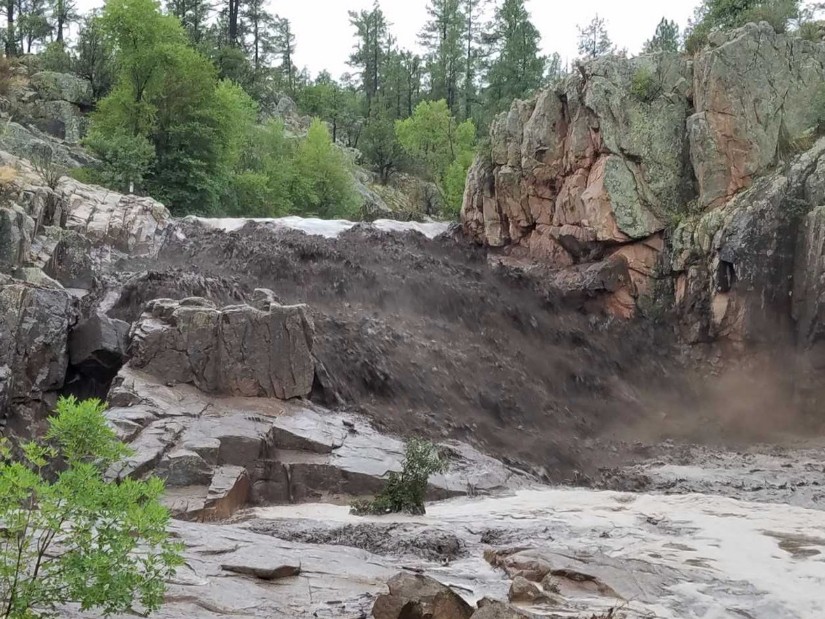 According to the Associated Press, sudden flooding in canyons has been deadly before. In 2015, seven people were killed in Utah's Zion National Park when they were trapped during a flash flood while hiking in a popular canyon that was as narrow as a window in some spots and several hundred feet deep.

In 1997, 11 hikers were killed near Page, Arizona, after a wall of water from a rainstorm miles upstream tore through a narrow, twisting series of corkscrew-curved walls on Navajo land known as Lower Antelope Canyon.