A confirmed tornado touched down in Alida, Saskatchewan, Canada on Wednesday night, July 5, 2017, destroying one home. No damage rating has been given to the tornado yet.

The tornado was spotted near the small community of Alida, about 40 km (24.8 miles) from the Manitoba-Saskatchewan boundary.

It was accompanied by baseball-sized hail and more than 50 mm (1.96 inches) of rain within 30 minutes, according to John Paul Cragg, a warning preparedness meteorologist with Environment Canada.

"The southern half of Saskatchewan is a real hotbed for thunderstorm activity through the summer months," Cragg said, as quoted by CBC.

Cragg said people should take cover even if a storm doesn't seem severe. If you can hear thunder, you can potentially be struck by lightning. "If thunder roars, go indoors," he said.

No damage rating has been given to the tornado yet.

The house suffered major structural damage. Luckily, the family hid in the basement and no injuries were reported.

"You don’t really have time to think," Brenda Lemieux, who watched a funnel cloud beeline for her house while she was still inside, said. "You just have time to react." Lemieux and her partner grabbed pillows and blankets and huddled in the basement bathtub.

"About four minutes later the house shook and that was it. The roof….all that stuff was gone," she said. "It’s unreal. It took maybe 30 seconds."

Lemieux’s roof was ripped off the house, the walls were torn away and her living room couch was thrown across the lawn. A large outdoor storage container had also tumbled across the yard. 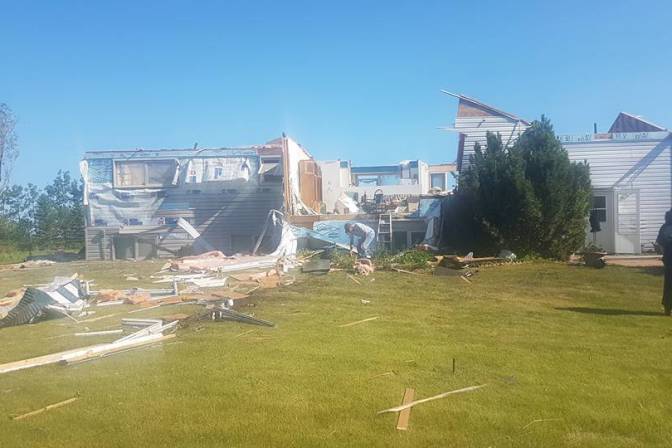