Over the last two decades, 1.35 million people were killed by natural hazards, half of them in earthquakes while other lost their lives due to weather and climate-related incidents. A large majority of these deaths have taken place in low- and mid- income countries, and it terms of numbers of dead per disaster and per 100 000 population, the highest price was paid by the poorest nations

7 056 disasters were reported around the globe in the period between 1996 and 2015, according to the Emergency Events Database (EM-DAT). In that period the frequency of geophysical disasters such as earthquakes, tsunamis, and volcanic eruptions, has remained broadly constant. However, a sustained rise in climate- and weather-related events such as floods, storms, and heat waves, was reported, accounting for the majority of disaster-related deaths.

Over the past forty years, weather and climate related disasters have doubled, and between 1996 and 2015, such incidents accounted for 6 392 events.

The year 2015, which was the hottest on record, reported almost as many deaths due to heatwaves, as were killed in the Nepalese earthquake. Major reported droughts have also doubled, from 16 to 32, when compared to the annual average in the period between 2006 and 2015. 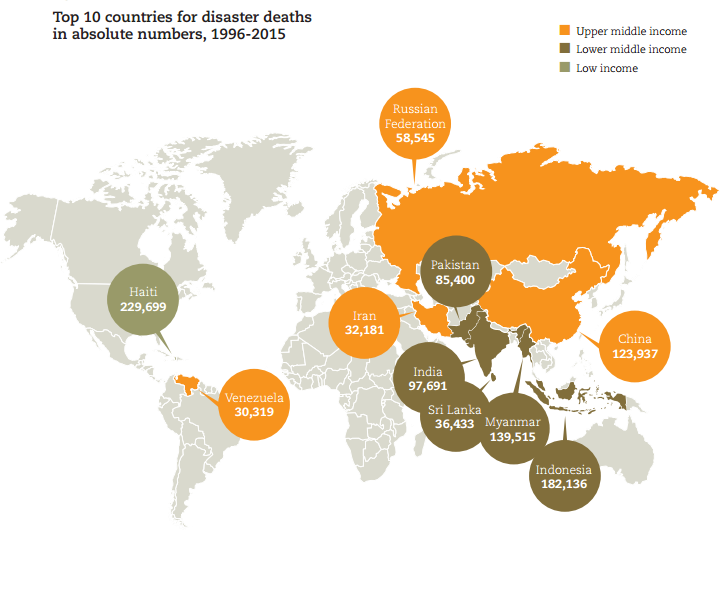 The EM-DAT study indicates the tsunamis were 16 times deadlier than ground movements in terms of the proportion of victims killed, a fact which makes tsunamis the deadliest major hazard on the planet.

The Sendai Framework for Disaster Risk Reduction, adopted by all UN states in March 2015, the global plan for reducing disaster losses, has set a goal of substantial reduction in global disaster mortality and has come to several key conclusions to aid in achieving the goal.

The high number of deaths resulting from earthquakes, including tsunamis over the last two decades is of deep concern, taking into the account the urbanization around the world in numerous seismic zones. This underlines the need to promote the mainstreaming of disaster risk assessments into land-use policy development and implementation, including urban planning, building codes and investing in earthquake-resistant infrastructure, houses, schools, health facilities and work places. It has been concluded that the private sector, and especially, the construction industry need to put a significant input into the goal.

Better data on the overall disaster mortality, especially resultant from weather and climate-related incidents is necessary, but also a higher focus on alleviating the impact of climate change on countries actively contributing to greenhouse gas emissions, which suffer disproportionate life losses because of extreme weather events, induced by the rising sea level and global warming.