Widespread flooding and landslides, caused by intense monsoon rainstorms across Nepal, killed 39 people, while further 28 went missing in the last 24 hours. Thousands have been displaced, and hundreds of homes devastated.

The districts of Pyuthan, Gulmi, Palpa, Makawanpur, Arghakhanchi, Rupandehi, Banke, Kapilvastu, Udayapur, Morang, Saptari, and Jhapa were among the hardest hit. Numerous homes and bridges have been swept away by the flood waters across the affected areas.

11 people died in Pyuthan alone, and 23 went missing, 14 of which during one landslide episode, that buried three homes at Rajawara and Khawang, and killed four people.

Several landslide incidents killed at least 7 people in Gulmi and left over 70 families displaced. Five homes and three bridges have been inundated and swept away, according to the local police.

Deadly landslides were also reported in Palpa, where 4 people died, three of which on the night of July 25, 2016 (local time). Five houses in Chorkate Bazaar were swept away by the overflowing Badighat stream. 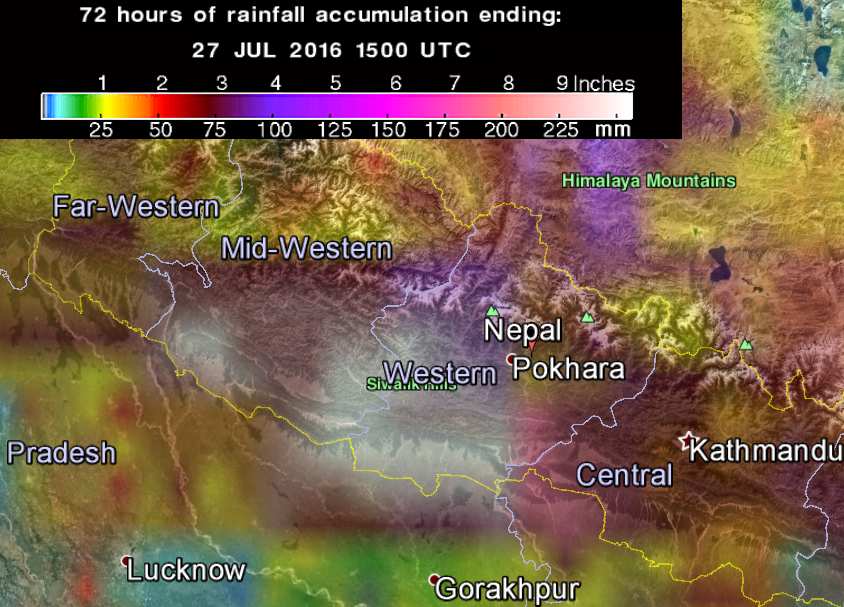 Flooding Tinau river devastated a suspension bridge at Butwal-13, putting 6 000 residents at risk. So far, the floods in the Tinau and Kanchan washed away 15 homes and killed two people.

A shelter for flood victims has been put up at Bhadrapur Secondary School, and Mahendra Ratna Lower Secondary School after the Mechi river flooded. In total, more than 800 people were forced to seek shelters.

The Banganga river in Kapilvastu flooded, leaving about 800 homes inundated. The Babai river flooded over 300 homes in Bardiya while 100 houses were inundated in Deukhuri in Dang, and 200 homes in Sunsari.

The water level of the Saptakoshi River reached 277 410 cusecs on the morning of July 26 (local time), its highest level of the year, following a period of continual rainfall over the last 10 days, causing 37 out of 56 existing floodgates to open.

The Raj Thebe river has been continuously rising, as well while the river Narayani crossed the danger mark. Local authorities have warned the people residing close to the rising rivers to be on alert.

Eastern and western regions can expect further light to moderate rainfall while some brief rain may affect central areas, according to Nepal's Meteorological Forecasting Division