As of 12:00 UTC on July 25, 2016, there are 3 active tropical systems in the central and eastern Pacific – Tropical Storm "Darby", Tropical Storm "Frank" and Hurricane "Georgette". While Darby hit Hawaii over the weekend and is still affecting the islands with locally very heavy rain, both Frank and Georgette are moving away from the coast of Mexico, and neither are expected to pose any risks to Hawaii.

Thanks to strong winds, which act as a protective shield, Hawaii's has the ability to dodge storms. This made Darby only the fifth tropical cyclone to hit Hawaii since 1949.

Tropical Storm "Darby" formed off the coast of western Mexico on July 12, 2016, and developed into the third hurricane of the 2016 eastern Pacific hurricane season by July 13. The system has weakened to a tropical storm on July 20 as it approached the central Pacific Ocean.

Darby made landfall near Pahala on Hawaii's Big Island Hawaii around 23:00 UTC on July 23 with maximum winds of 65 km/h (40 mph), bringing very heavy rain. Landfall location is in the vicinity of where Iselle made landfall in 2014.

State's emergency management reported on Saturday that flooding has closed a road in the Hamakua district of the Big Island. Portions of Interstate H-1 were also closed due to flooding on Sunday night, according to the National Weather Service office in Honolulu.

Although all that rain at once raised the risk of flash flooding and landslides, the rain was received as a blessing, as the state only received 60% of its average annual rainfall so far this year.

Maximum sustained winds were near 65 km/h (40 mph) with higher gusts. Darby is expected to weaken to a tropical depression in a couple of hours, and become post-tropical remnant low by Tuesday, July 26. Tropical-storm-force winds extend outward up to 110 km (90 miles) from the center, mainly to the northeast of the center. The estimated minimum central pressure is 1 010 hPa.

Additional rainfall of 50 – 100 mm (2 to 4 inches), with locally higher amounts, can be expected over portions of the Hawaiian Islands through today. These torrential rains could produce life-threatening flash floods and landslides, CPHC said.

On Friday, July 22, Georgette officially became the seventh named storm to form in July, tying the record for most July named storm formations set in 1985, the U.S. NWS confirmed. Georgette is well off the coast and is not threatening any land.

Georgette became a hurricane late UTC on July 23, the fourth this month in northeast Pacific, tying July record for hurricanes last set in 1992.

On July 24, it became a major hurricane, the third in northeast Pacific this month, tying the July record set in 1978 and 1992. 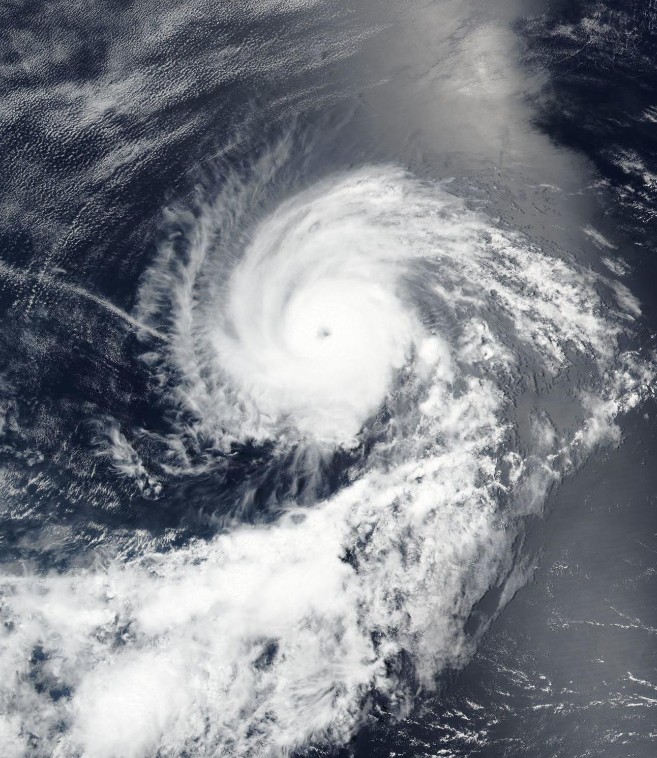 At 09:00 UTC on July 25, the center of Hurricane "Georgette" was located about 1 885 km (1 170 miles) WSW of the southern tip of Baja California, Mexico. The system is moving toward the northwest near 17 km/h (10 mph), and this motion with a decrease in forward speed is expected during the next couple of days, NHC said.

Maximum sustained winds are near 215 km/h (130 mph) with higher gusts, making Georgette a category 4 hurricane on the Saffir-Simpson Hurricane Wind Scale. Weakening is expected during the next 48 hours, and Georgette is likely to fall below hurricane strength on
Wednesday, July 27. 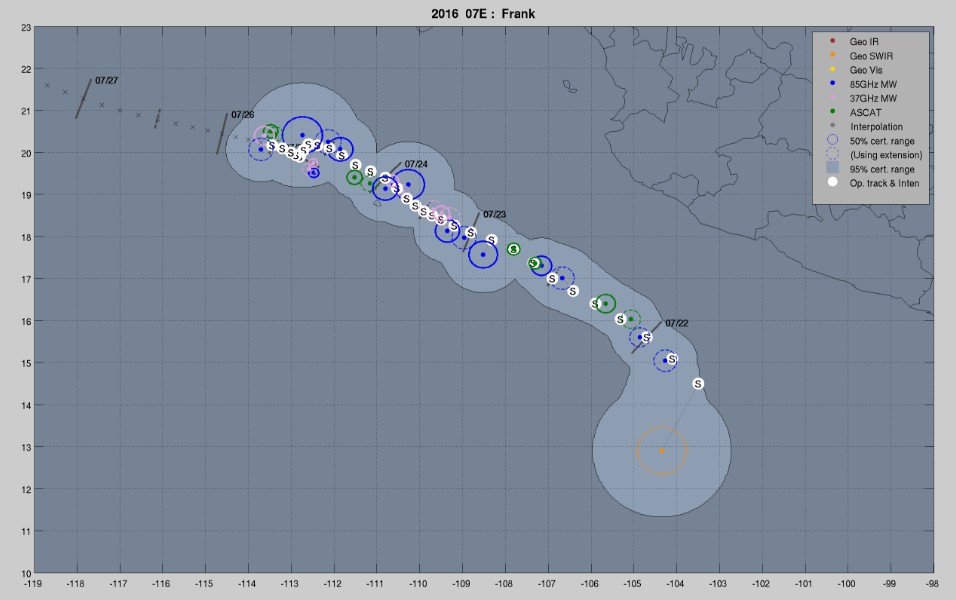 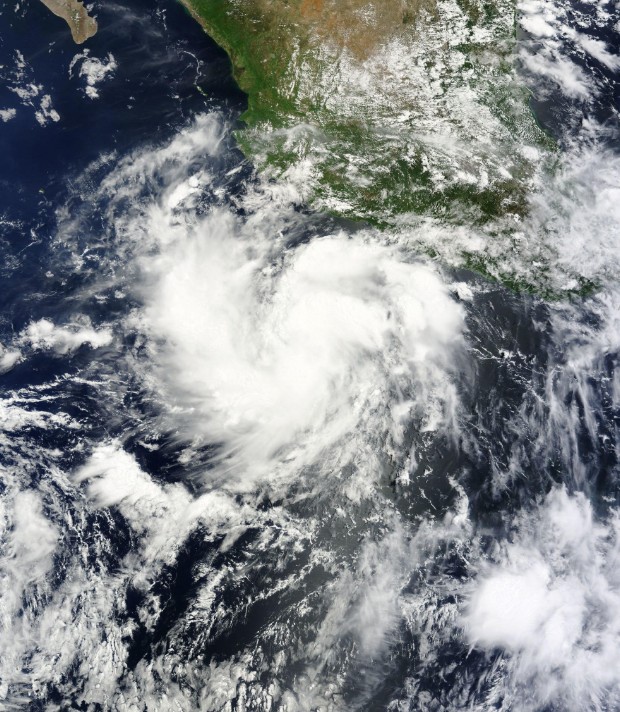 The system had maximum winds of 100 km/h (65 mph) and was moving west at 6 km/h (3 mph). The estimated minimum central pressure was 994 hPa. A WNW motion at a faster speed is expected over the next 48 hours. Some strengthening is possible during the next day or so.

Swells associated with Frank are affecting the coasts of the southern Baja California peninsula and the state of Sinaloa. These swells could cause life-threatening surf and rip currents. 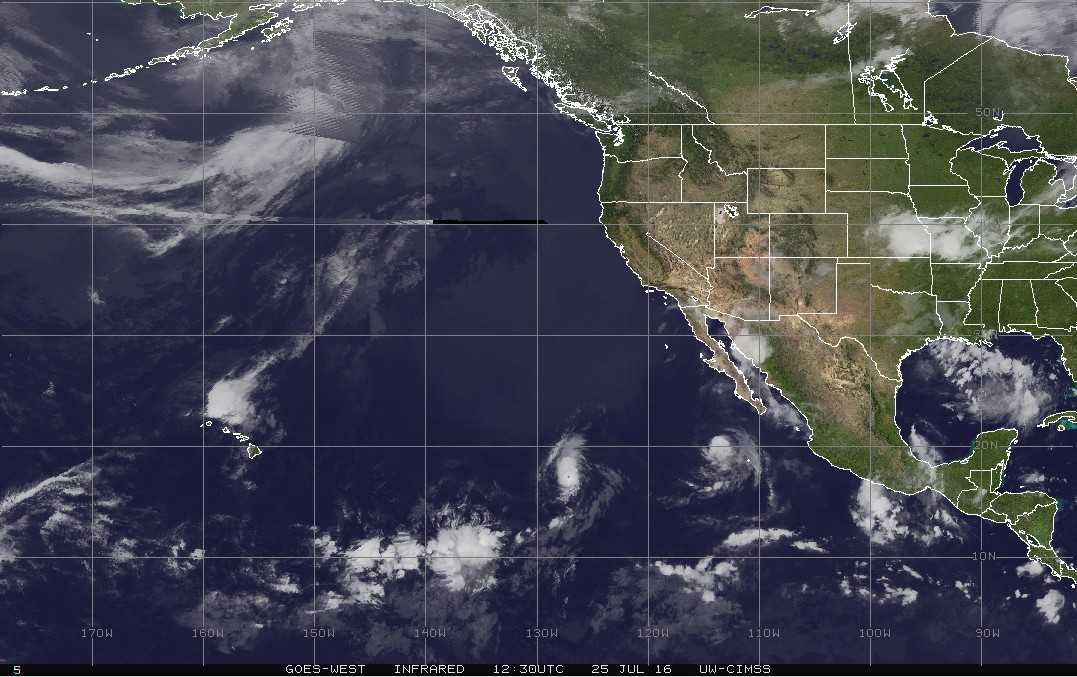 This summer, the NE Pacific is already showing a positive SST anomaly pattern and model predictions indicate that by September, it could intensify further with values ranging anywhere from 37 °C (98.6 °F) to 39 °C (102.2 °F) off the coast of Alaska and Canada, The Weather Network said.

Although this is a different ocean-atmosphere interaction signal to keep an eye on, the warmer waters in the north Pacific will probably have an effect on the nature of the Pacific Northwest storms moving into the region later this Fall. However, the warmer SST anomalies to the south, off the west coast of Mexico and Central America, could have a weakening effect on hurricane development and intensification in the Atlantic Ocean basin in the coming months.