Over the past couple of days, the seismic activity under Italy's Mount Etna is rising. There is no visible activity at the summit, however, the current situation suggests we might see it in the near future.

After May 2016 eruptions, things have been calm at Mount Etna for about four weeks. The seismic network started registering a gradual rise in volcanic tremor amplitude on June 23. 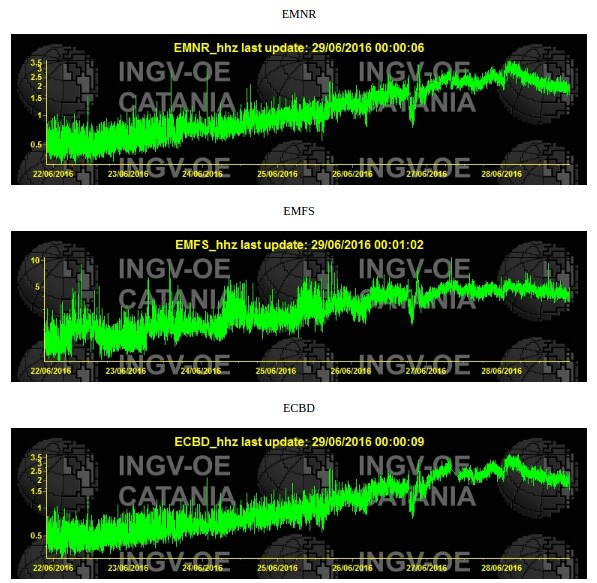 "This could indicate a phase of magma migrating to the surface and possibly herald new activity in the near future," VolcanoDiscovery reports. At the time, this is just a speculation, they added.

Events leading to May 2016 eruptions

Since early April 2016, there has been a gradual resumption of summit eruptive activity at Etna, which initially consisted of increased gas emission mainly from the Northeast Crater (NEC) and from the vent that had opened on November 25, 2015, on the upper east flank of the New Southeast Crater (NSEC). On May 7, an increase in the volcanic tremor amplitude, whose source shifted toward the NSEC, was accompanied by the appearance of a source of infrasonic signals at the NSEC. This was accompanied by rather discontinuous and small emissions of ash. During the first half of May, these emissions from the NSEC also produced small anomalies visible in the images of the thermal monitoring camera at Monte Cagliato (EMCT).

Intense Strombolian activity began at Etna's Northeast Crater  during the evening of May 17. Incandescent bombs were ejected above the crater rim and tephra was deposited on the flanks. During the morning of May 18, this activity was accompanied by ash emissions that drifted E and rapidly dispersed. Weak incandescence from the 25 November 2015 vent, on the upper E flank of the New Southeast Crater was visible, and an inclinometer about 1 km (0.62 miles) NW of NEC recorded rapid inflation of the summit area.

INGV reported that at around noon on May 20 Strombolian activity was visible at Etna's Voragine (VOR) crater and produced explosion noises audible across a large area on the S and E flanks. At night the activity intensified with explosions occurring at two or three vents, contemporaneous with renewed inflation of the summit area. Just after 04:00 CET (02:00 UTC) volcanic tremor amplitude rapidly increased and the Strombolian explosions turned into pulsating jets of lava, launching incandescent bombs 1 km S; an ash plume drifted SSE.

A thermal camera also recorded activity from a vent in the S portion of Northeast Crater. Observers noted that a fracture had formed on the SE flank of the central cone. In addition, an effusive vent in the saddle between the cone and the old cone of the Southeast Crater produced a small lava flow that traveled towards the Valle del Leone. Activity decreased around 05:00 CET and was over at about 06:00 CET.

On May 22, a vent on the upper E flank of New Southeast Crater cone produced a series of ash emissions which rose several hundred meters above the summit and dispersed. Some of the emissions had a thermal signature, indicating the presence of hot material. That evening Strombolian activity resumed at NEC; the rate and intensity of the activity fluctuated through the night. The strongest explosions ejected incandescent bombs up to a few hundred meters above the crater rim and onto the flanks. On May 23, sporadic ash emissions continued from the vent on the upper E flank of the New Southeast Crater cone.