After a gradual resumption of activity observed at Italy's Etna volcano since early April 2016, the volcano is now exhibiting mild to strong strombolian activity accompanied by dense smoke. The Aviation Color Code is Orange.

During the night of May 16, 2016, very weak and rare glows were observed at the 25 November 2015 vent on the upper east flank of the New Southeast Crater (NSEC). The activity was accompanied by infrasound signals vent.

On the early morning of May 17, the monitoring network of the INGV-Osservatorio Etneo (INGV-OE) recorded a gradual increase of the volcanic tremor amplitude, accompanied by infrasound signals coming from the NEC, and intense degassing with occasional, weak ash emissions from the same crater. INGV-OE staff present in the area of the Grotta del Gelo (on the upper north-northwestern flank) reported hearing explosion sounds probably coming from the NEC.

The activity further increased overnight May 18 with the introduction of strong strombolian activity and dense ash emissions. 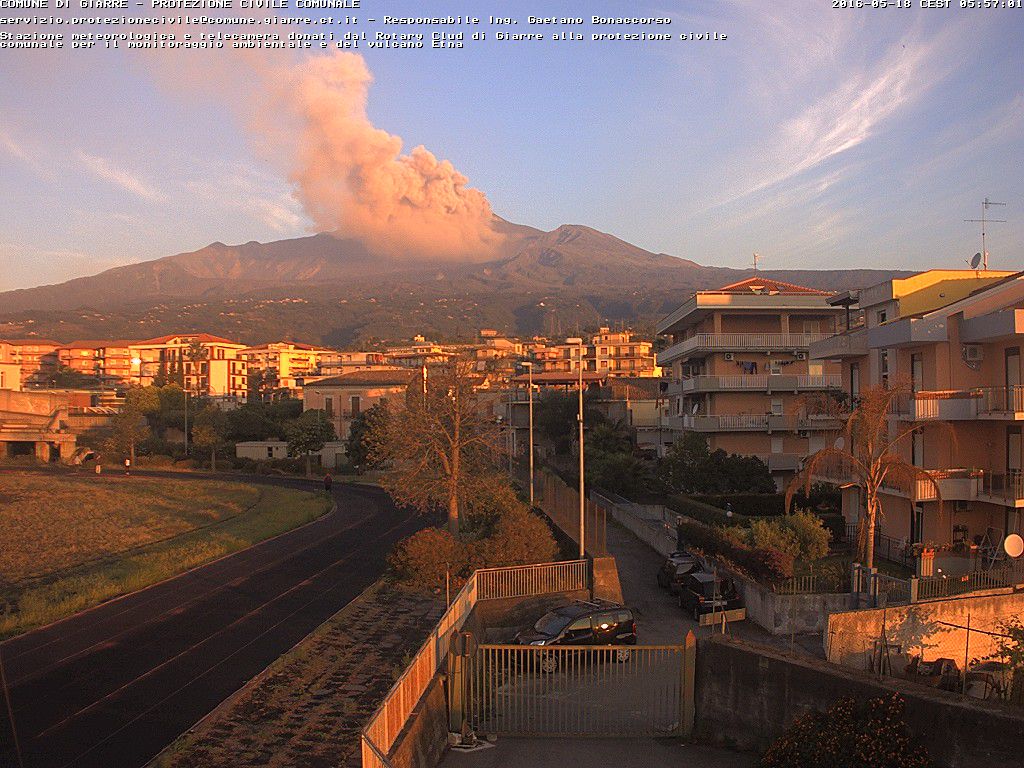 Etna on the morning of 18 May 2016: ash emission from the Northeast Crater, seen from home in Tremestieri Etneo pic.twitter.com/VjA9GQgDmm

Since early April 2016, there has been a gradual resumption of summit eruptive activity at Etna, which initially consisted of increased gas emission mainly from the Northeast Crater (NEC) and from the vent that had opened on 25 November 2015 on the upper east flank of the New Southeast Crater (NSEC), INGV reported on May 17.

This was accompanied by rather discontinuous and small emissions of ash. During the first half of May, these emissions from the NSEC also produced small anomalies visible in the images of the thermal monitoring camera at Monte Cagliato (EMCT).

On May 7, an increase in the volcanic tremor amplitude, whose source shifted toward the NSEC, was accompanied by the appearance of a source of infrasonic signals at the NSEC. However, the poor weather conditions allowed only to observe a modest emission of ash from the NSEC (25 November vent) and from the NEC.

INGV's analysis for May 18 is expected shortly. 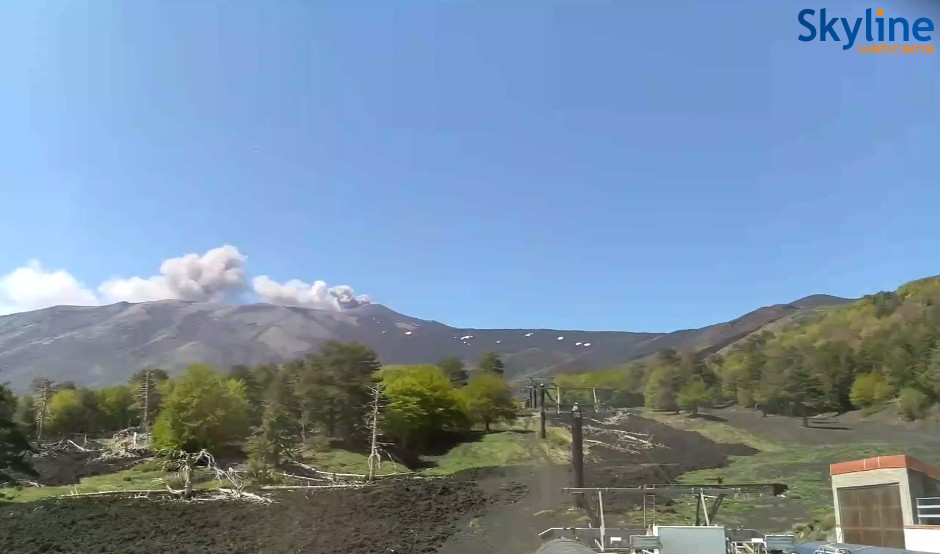 Since the evening of May 17, 2016, there has been an intense Strombolian activity at Etna's Northeast Crater (NEC), with ejection of incandescent bombs above the crater rim and fall of pyroclastics over the flanks of the cone. This morning, May 18, this activity was also accompanied by emission of volcanic ash forming a plume that was blown eastward by the wind and rapidly dispersed in the atmosphere. There were also weak glows at the 25 November 2015 vent on the upper east flank of the New Southeast Crater (NSEC). The volcanic tremor amplitude remained elevated at values similar to those reached on the evening before. On the late forenoon, a clinometer installed at Punta Lucia, at nearly 3 000 m (9 842 feet) elevation and about 1 km (0.62 miles) northwest of the NEC, recorded rapid inflation (swelling) of the summit area.

Shortly after 10:50 UTC (12:50 local time) on May 18, 2016, the visual and thermal surveillance cameras of the INGV-OE recorded the onset of eruptive activity at the Voragine (VOR), which in just a few minutes evolved into a pulsating lava fountain. At the same time, the Strombolian activity at the NEC diminished and passed into emission of dark ash, and finally ended. 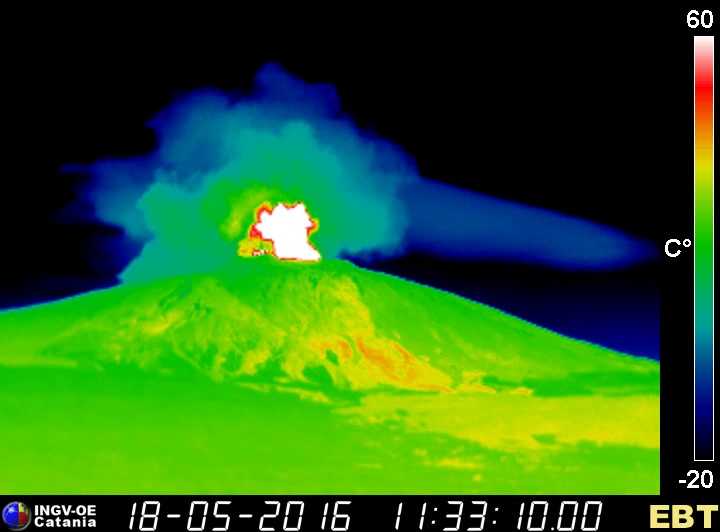 The image above is a frame captured by the thermal monitoring camera at Bronte (EBT), about 45 minutes after the onset of the activity at the VOR. With the beginning of paroxysmal activity, the volcanic tremor amplitude showed a rapid increase, and its source migrated from a position below the NEC toward the VOR. From the Voragine an ash plume rose to 3 000 – 3 500 m ( 9 842 – 11 482 feet) above the summit and was blown by the wind to east-southeast. During the afternoon lava started to overflow from the western rim of the Voragine-Bocca Nuova depression, feeding a minor lava flow toward west, and limited to the summit area.

At the time this update is being published, lava fountaining is continuing at the VOR. The eruptive activity is monitored continuously by the systems of video and thermal cameras, seismic stations and ground deformation.