Pieces of opal have been discovered in a meteorite found in Antarctica, a team of planetary scientists, led by Professor Hilary Downes of Birkbeck College London announced, at the National Astronomy Meeting in Nottingham on June 27, 2016. The discovery demonstrates that meteorites delivered water ice to asteroids early in the history of the solar system.

Opal, familiar on Earth as a precious stone used in jewelry, is made up of silica (the major component of sand) with up to 30% water in its structure, and has not yet been identified on the surface of any asteroid. Before the new work, opal had only once been found in a meteorite, as a handful of tiny crystals in a meteorite from Mars.

Downes and her team studied the meteorite, named EET 83309, an object made up of thousands and broken pieces of rock and minerals, meaning that it originally came from the broken up surface, or regolith, of an asteroid. Results from other teams show that while the meteorite was still part of the asteroid, it was exposed to radiation from the Sun, the so-called solar wind, and from other cosmic sources. Asteroids lack the protection of an atmosphere, so radiation hits their surfaces all the time.

EET 83309 has fragments of many other kinds of meteorite embedded in it, showing that there were many impacts on the surface of the parent asteroid, bringing pieces of rock from elsewhere in the solar system. Downes believes one of these impacts brought water ice to the surface of the asteroid, allowing the opal to form. 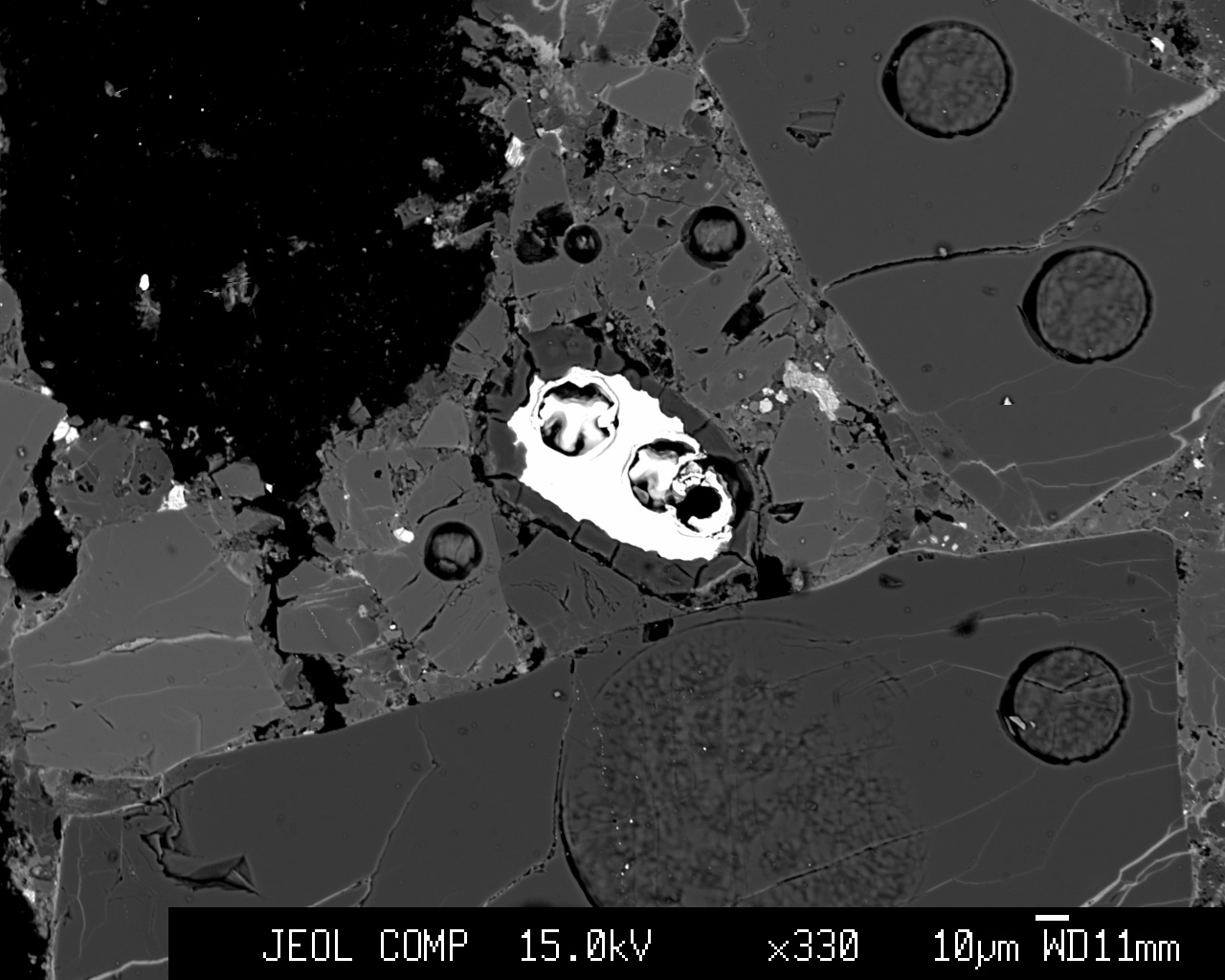 A backscattered electron image of the narrow opal rim surrounding a bright metallic mineral inclusion in meteorite found in Antarctica. The circular holes in this image are spots where laser analyses have been performed. Credit: H. Downes.

"The pieces of opal we have found are either broken fragments or they are replacing other minerals. Our evidence shows that the opal formed before the meteorite was blasted off from the surface of the parent asteroid and sent into space, eventually to land on Earth in Antarctica," Downes said.

"This is more evidence that meteorites and asteroids can carry large amounts of water ice. Although we rightly worry about the consequences of the impact of a large asteroid, billions of years ago they may have brought the water to the Earth and helped it become the world teeming with life that we live in today."

The team used different techniques to analyse the opal and check its composition. They see convincing evidence that it is extra-terrestrial in origin, and did not form while the meteorite was sitting in the Antarctic ice. For example, using the NanoSims instrument at the Open University, they can see that although the opal has interacted to some extent with water in the Antarctic, the isotopes (different forms of the same element) match the other minerals in the original meteorite.