After a sudden lava surge on May 24, 2016, a new lava flow was formed at Hawaiian Kilauea volcano. The flow remains active, as of June 16, but currently poses no threat to nearby communities. As of June 10, the so-called 'June 27th' lava flow northeast of Puʻu ʻŌʻō is officially no longer active.

A sudden lava surge at 18:50 UTC on May 24, 2015, caused the main lava tube carrying the lava underground away from Pu'u 'O'o to rupture. This resulted in two so-called surface lava breakouts located about 500 m north and northeast from the cone, feeding two new large surface lava flows. 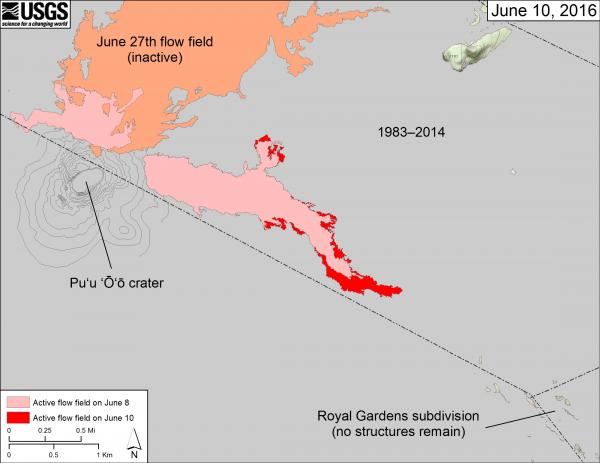 This map shows recent changes to Kīlauea’s active East Rift Zone lava flow field. The area covered by the June 27th flow (now inactive) as of June 2 is shown in orange. The areas covered by the recent breakouts at Puʻu ʻŌʻō as of June 8 are shown in pink, while widening and advancement of the active flow as mapped on June 10 is shown in red. Puʻu ʻŌʻō lava flows erupted prior to June 27, 2014, are shown in gray. Credit: USGS 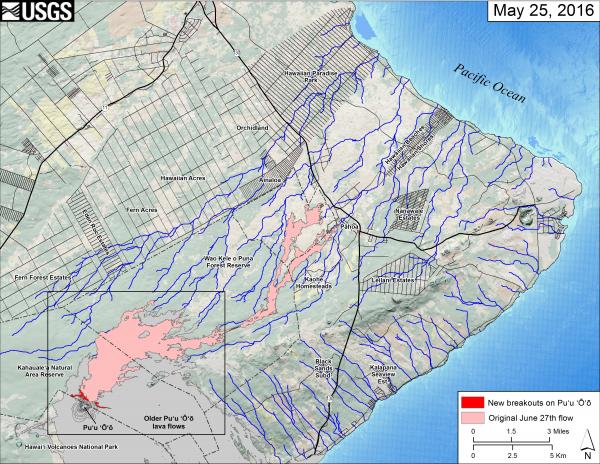 This small-scale map shows Kīlauea’s active East Rift Zone lava flow field in relation to the eastern part of the Island of Hawaiʻi. The new breakouts from Puʻu ʻŌʻō that began on May 24 are shown in red, as mapped on May 25. The area of the original June 27th lava flow field is shown in pink, as last mapped in detail on May 9. Puʻu ʻŌʻō lava flows erupted prior to June 27, 2014, are shown in gray. The black box shows the extent of the accompanying large scale map.

The blue lines show steepest-descent paths calculated from a 1983 digital elevation model (DEM; for calculation details, see http://pubs.usgs.gov/of/2007/1264/). Steepest-descent path analysis is based on the assumption that the DEM perfectly represents the earth's surface. DEMs, however, are not perfect, so the blue lines on this map can be used to infer only approximate flow paths. The base map is a partly transparent regional land cover map from National Oceanic and Atmospheric Administration (NOAA) Office of Coastal Management draped over a 1983 10-m digital elevation model (DEM). The bathymetry is also from NOAA.

Seismicity across the volcano is at background levels, and long-term deformation trends show continued inflation beneath the summit and upper Southwest Rift Zone.

HVO reports that summit tiltmeters recorded the onset of deflationary tilt – the start of the next DI event  at about 16:00 UTC on June 14. The broader deformation trend recorded by summit tiltmeters since late May has been one of gradual inflationary tilt. The summit lava lake level did not change significantly over most of June 13, staying at about 30 m (~100 ft) below the adjacent floor of Halemaʻumaʻu, but has begun to fall in concert with summit deflation.

Rates of seismicity across the volcano are at background levels, with episodes of summit tremor associated with spattering within the summit lava lake.

Sulfur dioxide emissions from the summit vent over the past week ranged from 4 200 to 5 400 metric tons/day during good trade wind conditions. Data from GPS networks and InSAR (satellite radar) show continued long-term inflation of the summit and upper Southwest Rift Zone magma reservoirs.

Bright glow overnight (June 13-14) from the pit just west of the Puʻu ʻŌʻō's crater (West pit) suggests that it still contains a small lava pond. Seismicity is at background levels, and the sulfur dioxide emission rate from all East Rift Zone vents was about 290 metric tons/day when last measured on June 9.

Webcam views show that the lava flow from the vent on the east flank of Puʻu ʻŌʻō remains active and continues to spread as it advances southeast. Bright incandescence was visible overnight in webcam views from several skylights along the upper part of the tube system supplying lava to the front part of the flow. 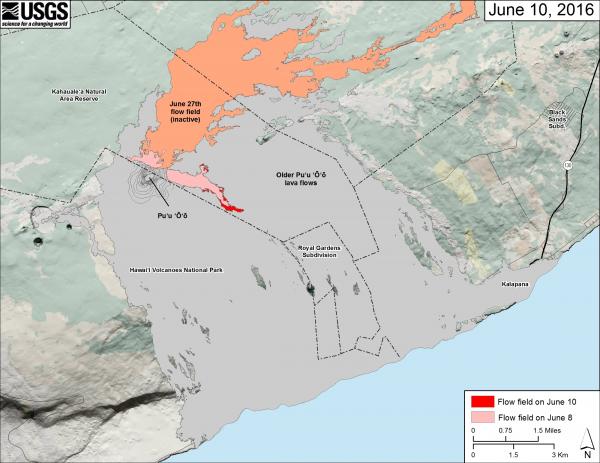 This small-scale map shows Kīlauea’s active East Rift Zone lava flow field in relation to the southeastern part of the Island of Hawaiʻi. The area of the active flow field on June 8 is shown in pink, while widening and advancement of the flow field as mapped on June 10 is shown in red. The area covered by the June 27th flow (now inactive) as of June 2 is shown in orange. The Puʻu ʻŌʻō lava flows erupted prior to June 27, 2014, are shown in gray. Credit: USGS

As of June 10, 2016, the so-called 'June 27th' lava flow northeast of Puʻu ʻŌʻō is officially no longer active. The June 27th flow was active a bit more than 2 years and produced an impressiely long-lived and stable lava field spreading to the northeast. The flow reached Pahoa village in late 2014 and early 2016, but soon stopped and the town was largely spared. When the new breakouts formed high up on the tube (near the vent) on May 24, 2016, the supply of magma into this long-lived system was effectively cut. The remaining activity of the June 27th field seen in the past two weeks, consisting of small, scattered movements on the margins were simply the last magma still in the tube downstream draining away.

The 3 x 5 km (1.9 x 3.1 miles) caldera was formed in several stages about 1500 years ago and during the 18th century; eruptions have also originated from the lengthy East and SW rift zones, which extend to the sea on both sides of the volcano. About 90% of the surface of the basaltic shield volcano is formed of lava flows less than about 1 100 years old; 70% of the volcano's surface is younger than 600 years. A long-term eruption from the East rift zone that began in 1983 has produced lava flows covering more than 100 sq km (37 sq miles), destroying nearly 200 houses and adding new coastline to the island. (GVP)