New research, conducted by scientists from the Southern Methodist University (SMU) in Dallas, revealed two existing sinkholes near Wink, Texas, are expanding and are unstable. Also, results suggest that new sinkholes are forming as the nearby subsidence occurs at alarming rates, warning that the holes may pose a bigger hazard in the coming future.

The sinkholes were caused by the oil and gas extraction which was at its maximum between 1926 and 1964. The first sinkhole near the Hendricks oil well 10-A formed in 1980 while the second one opened in 2002 near Gulf WS-8 supply well.

The satellite radar datasets, used for observing the 2D east-west deformation if the sinkholes, and vertical deformation, were collected during the five months between April and August 2015. The SMU researchers applied the interferometric synthetic aperture radar (InSAR) technique to detect changes invisible to the naked eye.

“From 700 km (435 miles) above the Earth’s surface, this InSAR technique allows us to measure inch-level subsidence on the ground. This is a monumental human achievement, and scientists will not stop endeavoring to improve this technique for more precise measurements,” said Zhong Lu, who is world-renowned for leading scientists in InSAR applications.

Satellite radar images of the sinkholes suggest the area may be undergoing some big changes, as they seem to be expanding across the already unstable area, that is, according to satellite observations, subsiding at a fast rate. According to the scientists, this suggests, the new sinkholes, or one giant sinkhole, could form in the area. 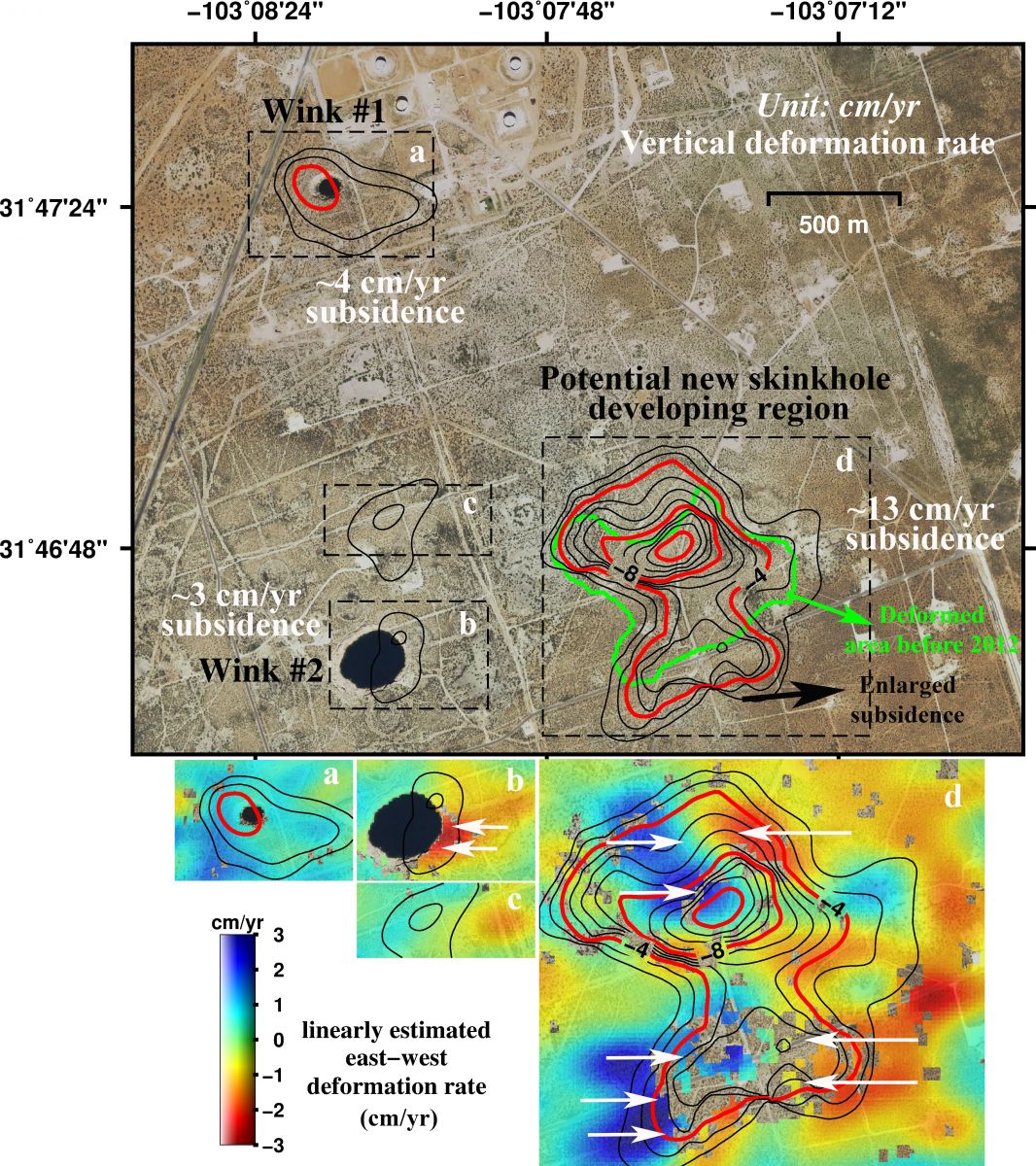 Measurements from satellite radar images of two giant West Texas sinkholes (dark black areas) show the ground around them is sinking, including indications a potential new sinkhole is developing. The rates of east-west deformation of the ground (cm/year) are indicated in blue (eastward) and red (westward). Image credit: Jin-woo Kim, SMU

“This area is heavily populated with oil and gas production equipment and installations, hazardous liquid pipelines, as well as two communities. The intrusion of freshwater to underground can dissolve the interbedded salt layers and accelerate the sinkhole collapse. A collapse could be catastrophic. Following our study, we are collecting more high-resolution satellite data over the sinkholes and neighboring regions to monitor further development and collapse,” said Jin-Woo Kim, a research scientist from the Roy M. Huffington Department of Earth Sciences at SMU, a leader of the SMU geophysical team that reported the discovery.

The unstable ground in the region is likely linked to changing groundwater levels and dissolving minerals. A deep-seated salt bed, a part of the oil-rich Permian Basin of West Texas and southeastern New Mexico, are located underneath the region.

The scientists have discovered a high correlation between groundwater level in the underlying Ogallala Aquifer, and sinking of the surface observed during the summer, influenced by successive roof failures in underlying cavities. 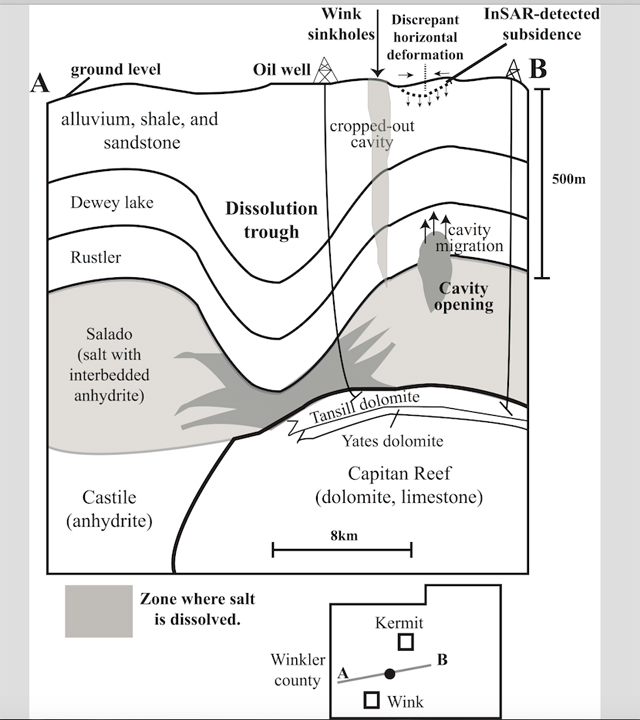 A schematic cross section in Winkler County shows zones where salt dissolved in the Salado Formation, and where subsidence of the ground was detected by satellite radar images. Oil was extracted from the Yates and Tansill formations so that water flowing into the Salado Formation for oil production could cause the dissolution cavity and create the Wink sinkholes.Image credit: Jin-woo Kim, SMU

According to satellite images and groundwater records, the grounds in the region rise when groundwater levels rise. The presence of groundwater then enhances the dissolving process of the underground salts, causing the subsiding of the ground surface.

The first sinkhole, Wink Sink No. 1, closer to the Kermit town, seems more unstable, based on modeling the satellite image datasets. The hole is the smaller one of the two and has grown to a length of a football field. 110 m (361 feet) across since its formation.  An oval-shaped deformation surrounding the sinkhole measures about 500 m (1 640 feet) in width, and is subsiding at a rate of up to 4 cm (1.6 inches) per year.

The second sinkhole, Wink Sink No.2, is the larger one and situated close to the Wink town. Its width varies between 204 and 274 m (670 and 900 feet). The sinkhole is not subsiding as fast the first one. On the other hand, its eastern side is collapsing and eroding westward at a rate of up to 3 cm (1.2 inches) per year.

The highest subsidence rate, of over 13 cm (5 inches) per year, was observed in an area lying 1.2 km (0.7 miles) northeast of the second sinkhole, the aerial extent of which has increased in size over the last 8 years. This deformation may be an alarming precursor to the potential future development of the hazards in the vicinity, the researchers warned.

An area lying over 1 km (0.6 miles) northeast of the second sinkhole has been sinking at a rate of 4 cm (1.6 inches) in four months only. The ground along the road traveled by oil field vehicles, situated approximately 400 m (1.3 km) north of the second sinkhole, has been observed to subside for about 3 cm (1.3 inches) per year.

“Sinkhole formation has previously been unpredictable, but satellite remote sensing provides a great means to detect the expansion of the current sinkholes and possible development of new sinkholes. Monitoring the sinkholes and modeling the rate of change can help predict potential sinkhole development,” said Kim.

Featured image: Measurements from satellite radar images of two giant West Texas sinkholes (dark black areas) show the ground around them is sinking, including indications a potential new sinkhole is developing. The rates of east-west deformation of the ground (cm/year) are indicated in blue (eastward) and red (westward). Image credit: Jin-woo Kim, SMU