The Australian Bureau of Meteorology expects significant rainfall in parts of all states and territories this weekend, extending into early next week.

Latest satellite imagery shows an extensive cloud band, with embedded thunderstorms, is extending from the Indian Ocean to the northwestern and central parts of the country. This is associated with an upper level trough. High cloud is streaming over Queensland ahead of the main cloudband due to an upper level jetstream. 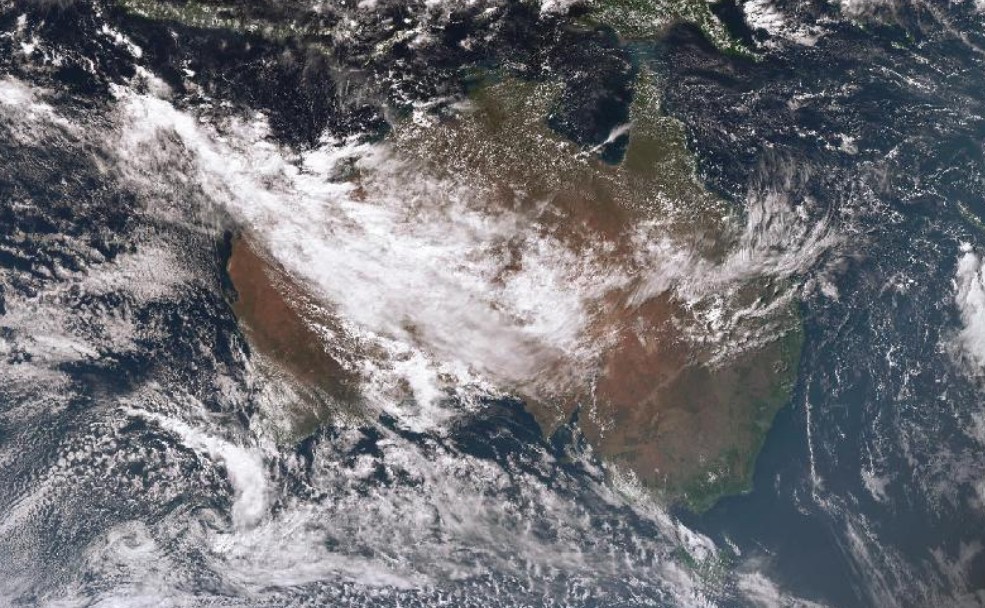 "This is the first widespread rainfall this autumn and a welcome start for the southern crop and pasture growing season. However, it is an unusually large scale weather event across Australia, and significant weather events also carry some measure of risk," Dr. Tupper said.

"Whatever your plans for this weekend — whether inland, near a river, on a coast, or on the sea — we advise members of the public to pay close attention to official forecasts and warnings, including flood warnings. Go to www.bom.gov.au for the latest warnings and stay tuned for media broadcasts for up-to-date information in your area." 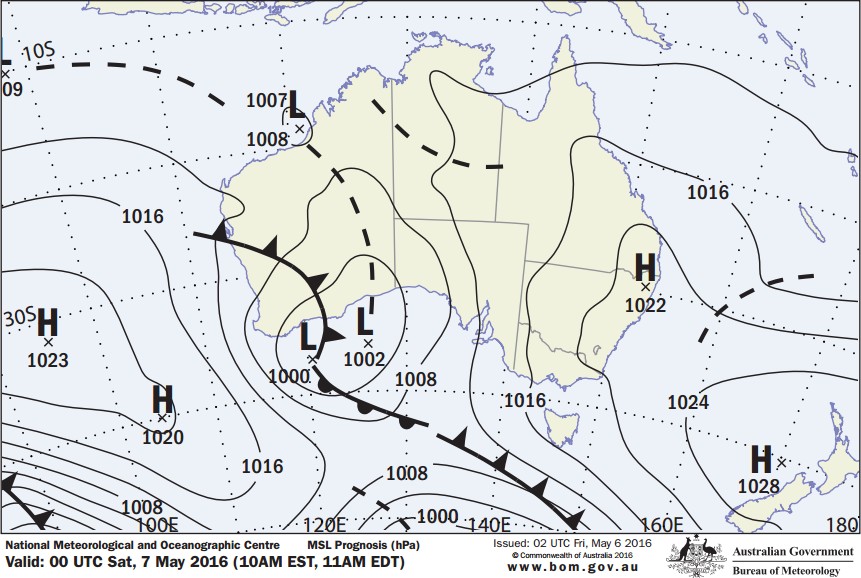 The cloud band is predicted to bring heavy falls of rain to parts of the Eastern Pilbara, Kimberley and Interior districts of Western Australia on Friday, Saturday and Sunday. Falls in excess of 50 mm (1.96 inches) are possible, with some isolated falls of up to 100 mm (3.93 inches) forecast.

These falls are not typical for this time of the year, and may lead to some localized flooding.

This rain is in contrast to the recent Wet Season in the Kimberley, which was the driest for 11 years.

During Saturday, the cold front is expected to produce rain in the south west of the state, including Perth, but falls are not expected to exceed 20 mm (0.78 inches).

The cloud band is expected to clear WA on Monday.

The Bureau is forecasting rainfall in the order of 100 mm (3.93 inches) to 150 mm (5.90 inches) across southern parts of the Northern Territory between Friday to Sunday.

This is shaping up to be on par with the major widespread rainfall event of early 2011, and will be welcome news to pastoralists in central Australia.

A Flood Watch is current for the Western and Eastern Inland Rivers. Widespread areas of flooding are expected in the Tanami, Lasseter and Simpson districts over the weekend. This is expected to affect road access in many parts with some roads becoming impassable. Some communities may also become isolated.

Alice Springs is likely to see some heavy rainfall over the weekend, with current forecasts suggesting 50 mm (1.96 inches) to 100 mm (3.93 inches), which may start the Todd River flowing.

Two main rainfall events are forecast for South Australia. The first will accompany the rain band arriving in South Australia on Saturday, followed by significant showers associated with a low pressure system on Monday.

Rain will extend to most of the state. The heaviest falls of between 50 mm (1.96 inches) to 70 mm (2.75 inches) during the weekend are expected in the North East Pastoral district.

The showers associated with the low pressure system will possibly be heavy at times over the agricultural areas overnight on Sunday and Monday.

Adelaide is expected to receive rainfall of between 20 mm (0.78 inches) to 50 mm (1.96 inches) as a result of both the rain and the showers, with possible higher falls in the Adelaide Hills.

The rain band will approach southwest Queensland on Sunday, bringing with it isolated thunderstorms through the western districts. Areas southwest of Urandangi (south of Mount Isa) to Bollon can expect moderate to heavy rainfall on Sunday and Monday.

Areas of thundery rain over the interior will decrease to showers and then eventually clear from the west on Monday.

On Sunday and Monday, a low pressure trough will move through areas west of the Divide and produce widespread rain over these areas.

At this stage the heaviest falls are expected for the southern NSW slopes and Alpine region, with forecast totals broadly in the range of 50 (1.96 inches) to 100 mm (3.93 inches), and isolated locations potentially receiving in excess of 150 mm (5.90 inches).

Totals expected further north and west are in the range of 25 mm (0.98 inches) to 50 mm (1.96 inches), with isolated locations receiving 80 mm (3.14 inches). Significantly less rain is expected to the east of the Divide.

The Bureau will monitor the situation and revise totals as new information becomes available.

There is also a risk for damaging winds. This risk is greatest over the southern alpine peaks from late Monday night into early Tuesday morning.

Heavy rain is forecast along the northeast ranges, with two-day totals from Sunday through Monday expected to be in the range 50 (1.96 inches) to 100 mm (3.93 inches), reaching as high as 150 mm (5.90 inches) about more exposed alpine peaks. As a result, minor flooding may develop from Monday.

Tasmania has seen a succession of strong cold fronts already during the past week.

Cloud bands associated with a low pressure system are forecast to produce two to five mm of rain over northwest Tasmania on Saturday, but generally less than one mm in the southeast.

On Sunday, showers are expected over most of the state with falls between two and five mm. Heavier rain is forecast for Monday, with up to 50 mm (1.96 inches) possible in the northwest.

Australia woke up today to the start of a significant rain event. Stay tuned to https://t.co/jlOoTZtpU5 this weekend pic.twitter.com/UwDMo0wAFh