Alaska Volcano Observatory (AVO) detected an explosion at Cleveland Volcano at 02:44 UTC on May 6, 2016. The last known eruption of this volcano took place in 2015.

The eruption was detected in both infrasound (air pressure) and seismic data. There are no recent satellite views since the detected explosion. However, previous Cleveland explosions have typically produced ash emissions.

Aviation Color Code was raised from Yellow to Orange.

At 18:58 UTC on April 16, AVO detected a similar explosion at the volcano, also by infrasound and seismic data. The observatory raised the Level of Concern Color Code to Orange and the Volcano Alert Level to Watch. Seismicity decreased to background levels within an hour of the explosion. Satellite views the next day were obscured by clouds below 9.1 km (30,000 ft) a.s.l.; no signs of ash had been detected above that altitude. 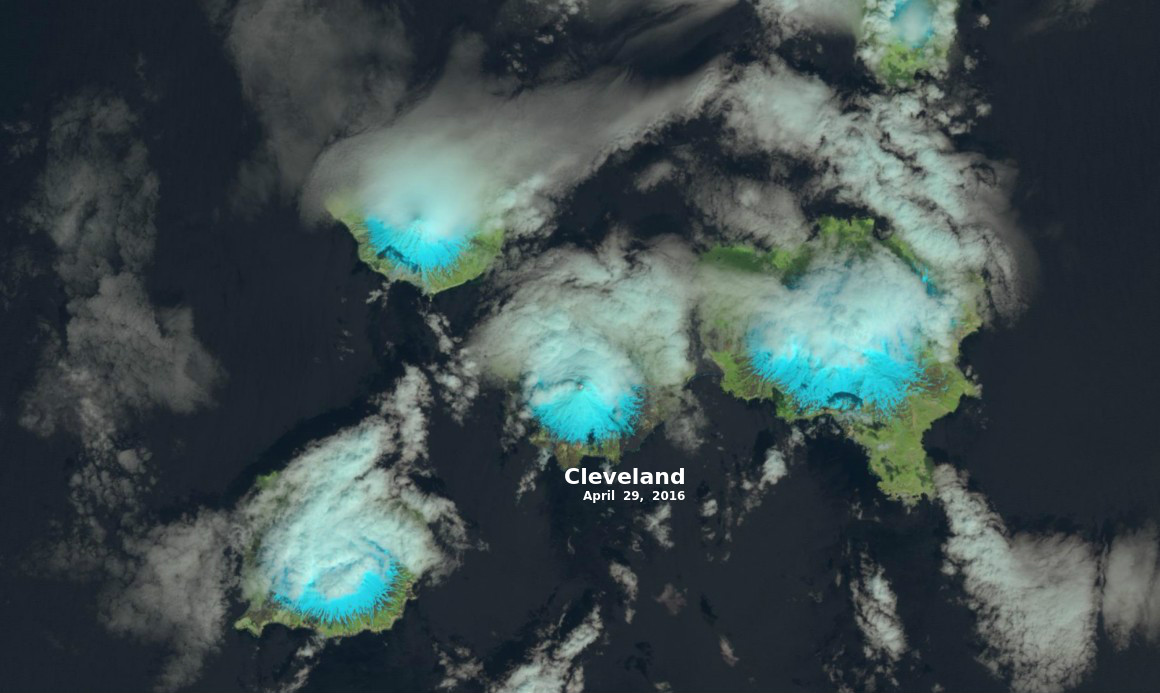 On April 29, 2016, AVO reported that no activity had been detected at Cleveland following the April 16 explosion; seismicity had returned to low levels within an hour of the event and no infrasound (pressure sensor) signals had been detected. Recent satellite images indicated that the August 2015 lava dome was gone and had been replaced with a small cinder cone within the summit crater.

Beautifully symmetrical Mount Cleveland stratovolcano is situated at the western end of the uninhabited, dumbbell-shaped Chuginadak Island. It lies SE across Carlisle Pass strait from Carlisle volcano and NE across Chuginadak Pass strait from Herbert volcano. Cleveland is joined to the rest of Chuginadak Island by a low isthmus. The 1730-m-high Mount Cleveland is the highest of the Islands of the Four Mountains group and is one of the most active of the Aleutian Islands.

The native name for Mount Cleveland, Chuginadak, refers to the Aleut goddess of fire, who was thought to reside on the volcano. Numerous large lava flows descend the steep-sided flanks. It is possible that some 18th-to-19th century eruptions attributed to Carlisle should be ascribed to Cleveland (Miller et al., 1998). In 1944 Cleveland produced the only known fatality from an Aleutian eruption. Recent eruptions have been characterized by short-lived explosive ash emissions, at times accompanied by lava fountaining and lava flows down the flanks. (GVP)