Over 8 000 people reported feeling the M4.0 quake, rating the intensity as weak to light. 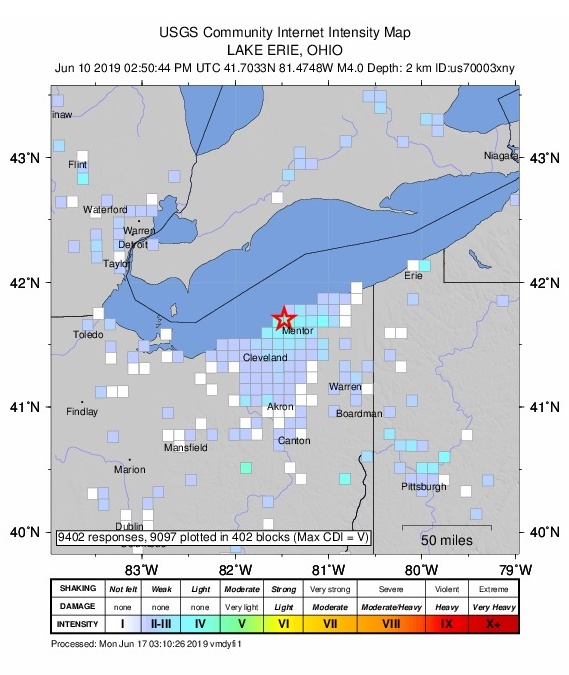 Earthquakes and Seismic Risk in Ohio

From GeoFacts No.3, by Michael C. Hansen

While this region is not typically associated with strong earthquakes, Ohio was hit by at least 200 earthquakes since 1776, according to the Ohio Department of Natural Resources (ODNR). The majority of them, however, caused no damage or injuries and have been felt only locally.

Of those 200, at least 15 earthquakes have caused minor to moderate damage. Fortunately, no deaths and only a few minor injuries have been recorded for these events.

Ohio is on the periphery of the New Madrid Seismic Zone, an area in Missouri and adjacent states that was the site of the largest earthquake sequence to occur in historical times in the continental United States. Four great earthquakes were part of a series at New Madrid in 1811 and 1812. These events were felt throughout the eastern United States and were of sufficient intensity to topple chimneys in Cincinnati. Some estimates suggest that these earthquakes were in the range of 8.0 on the Richter scale. 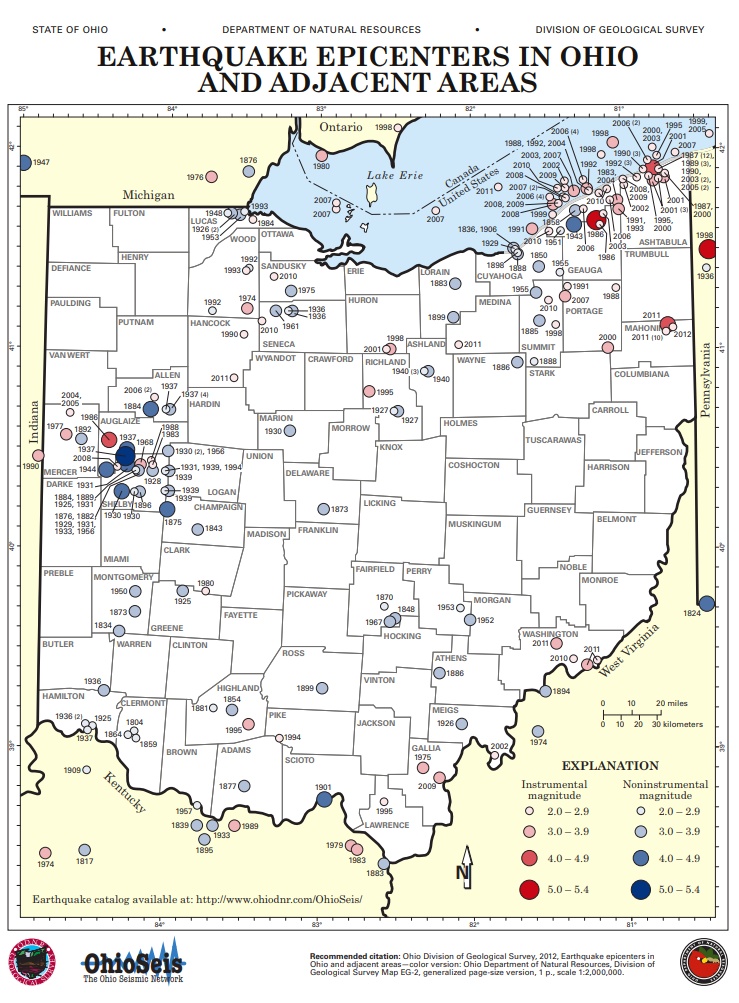 Shelby County and surrounding counties in western Ohio have experienced more than 40 felt earthquakes since 1875, according to ODNR. Although most of these events have caused little or no damage, earthquakes in 1875, 1930, 1931, and 1937 caused minor to moderate damage. Two earthquakes in 1937, on March 2 and March 9, caused significant damage in the Shelby County community of Anna. The damage included toppled chimneys, cracked plaster, broken windows, and structural damage to buildings. The community school, of brick construction, was razed because of structural damage.

Northeastern Ohio has experienced more than 100 earthquakes since 1836, many of them beneath Lake Erie offshore from Lake County, and in association with an injection well in Ashtabula. Most of these events were small and caused little or no damage. However, an earthquake on January 31, 1986, in southern Lake County, strongly shook Ohio and was felt in 10 other states and southern Canada. This event had a magnitude of 5.0 and caused minor to moderate damage, including broken windows and cracked plaster, in the epicentral area.

Southeastern Ohio has been the site of at least 15 felt earthquakes since 1776. The 1776 event, recorded by a Moravian missionary, has a very uncertain location. Earthquakes in 1901 near Portsmouth (Scioto County), in 1926 near Pomeroy (Meigs County), and in 1952 near Crooksville (Perry County) caused minor to moderate damage.

The origins of Ohio earthquakes, as with earthquakes throughout the eastern United States, are poorly understood. Those in Ohio appear to be associated with ancient zones of weakness in the Earth's crust that formed during rifting and continental collision events about a billion years ago. These zones are characterized by deeply buried and poorly known faults, some of which serve as the sites for periodic release of strain that is constantly building up in the North American continental plate due to continuous movement of the tectonic plates that make up the Earth's crust.

The brief historic record of Ohio earthquakes suggests a risk of moderately damaging earthquakes in the western, northeastern, and southeastern parts of the state. Whether these areas might produce larger, more damaging earthquakes is currently unknown, but detailed geologic mapping, subsurface investigations, and seismic monitoring will greatly help in assessing the risk.