An extensive severe weather outbreak is targeting the central United States, with the highest risk on Tuesday, April 26, 2016, into Wednesday, April 27. Three rounds of severe thunderstorms are expected through next weekend.

Severe thunderstorms with large hail, strong winds and a couple of tornadoes already made their way across Kansas and Nebraska on Sunday afternoon into evening (local time).

The most significant damage reported from the storms as of Sunday night occurred in Republic County near the Kansas-Nebraska border, KWCH12 reports.

"A mobile home was destroyed, and two people were hurt from the strong thunderstorms. Dispatchers say both people injured were out storm spotting. The extent of their injuries is unknown as of Sunday night."

Further south, an area that saw some of the most active weather Sunday was Saline County where a massive wall cloud moved in dropping several funnels and baseball-sized hail. One man was hit in the head and needed medical treatment, police in Salina said.

A tornado also touched down near Superior, Nebraska, just after 18:00. It was on the ground for six minutes and traveled 6.4 km (4 miles). Luckily, no injuries were reported.

Basehunters recorded a brief, weak tornado about 6 km west of Junction City, Kansas. This is a two-hour drive from Superior, Nebraska.

The following video was recorded by Brett Adair of Life Storms Media:

Tornadoes were also reported in Waseca and Delavan, Minnesota and League City, Texas.

NWS SPC warned significant severe thunderstorms will be possible across parts of the southern and central Great Planes Tuesday afternoon (local time) into the nighttime hours. Tornadoes, some strong will be possible in addition to very large hail and damaging winds. 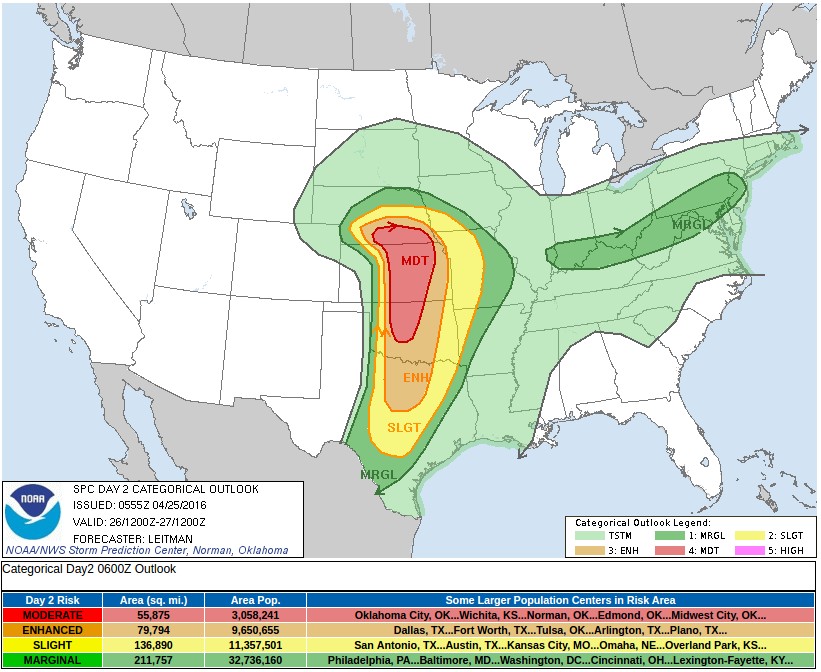 The area at greatest risk for violent storms on Tuesday is forecast to extend from southern and central Texas to large part of Oklahoma, Kansas and Missouri, AccuWeather warned. However, the area could change somewhat, depending on the track of a storm that will move out of the Rockies on Monday night.

According to Andrew Gagnon, AccuWeather Assistant Director of Storm Warning Services, all modes of severe weather are likely, including tornadoes, large hail and damaging winds. The severe weather will continue into Wednesday and may extend into part of northeastern Texas.

"Of the two days, Tuesday has the greatest potential to produce numerous tornadoes, including some strong [wedge] tornadoes that could be on the ground for an extended period of time," Gagnon said.

Locally severe storms may extend from parts of the central Appalachians to the lower Mississippi Valley later in the week.

A new storm will begin to move out of the Rockies by the end of the week and could initialize another round of severe weather over portions of the Plains, which may then expand across the Mississippi, Ohio and Tennessee valleys by the start of May.