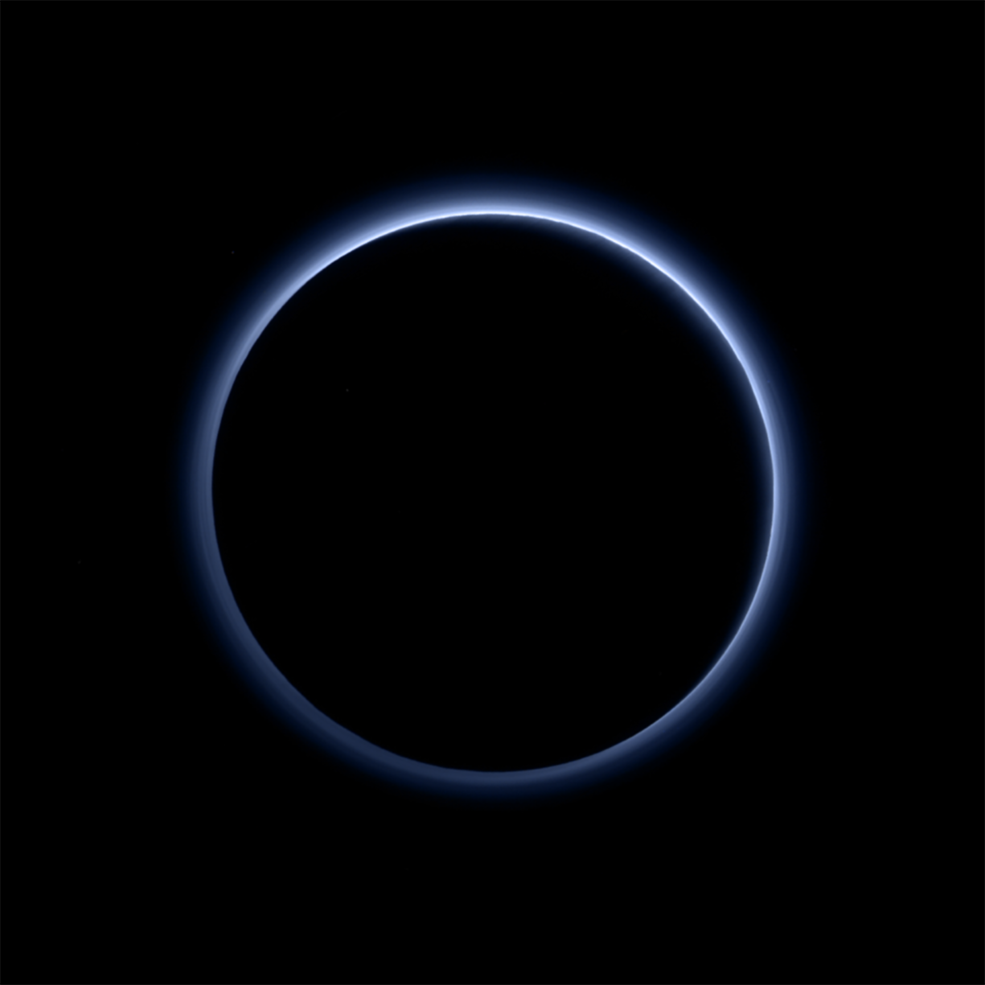 Pluto’s haze layer shows its blue color in this picture taken by the New Horizons Ralph/Multispectral Visible Imaging Camera (MVIC). The high-altitude haze is thought to be similar in nature to that seen at Saturn’s moon Titan. The source of both hazes likely involves sunlight-initiated chemical reactions of nitrogen and methane, leading to relatively small, soot-like particles (called tholins) that grow as they settle toward the surface. This image was generated by software that combines information from blue, red and near-infrared images to replicate the color a human eye would perceive as closely as possible. Image credit: NASA/JHUAPL/SwRI

The tholin particles most likely form high in the atmosphere, where ultraviolet sunlight breaks apart and ionizes nitrogen and methane molecules, allowing them to react with one another to form more complex negatively and positively charged ions. These complex molecules continue to combine and grow until they reach the size of a small particle; volatile gases condense and coat their surfaces with ice frost before they have time to fall through the atmosphere to the surface, where they add to Pluto's red coloring.

Regions with exposed water ice are highlighted in blue in this composite image from New Horizons' Ralph instrument, combining visible imagery from the Multispectral Visible Imaging Camera (MVIC) with infrared spectroscopy from the Linear Etalon Imaging Spectral Array (LEISA). The strongest signatures of water ice occur along Virgil Fossa, just west of Elliot crater on the left side of the inset image, and also in Viking Terra near the top of the frame. A major outcrop also occurs in Baré Montes towards the right of the image, along with numerous much smaller outcrops, mostly associated with impact craters and valleys between mountains. The scene is approximately 450 kilometers (280 miles) across. Note that all surface feature names are informal. Image credit: NASA/JHUAPL/SwRI

“Large expanses of Pluto don’t show exposed water ice because it’s apparently masked by other, more volatile ices across most of the planet. Understanding why water appears exactly where it does, and not in other places, is a challenge that we are digging into,” said science team member Jason Cook, of SwRI.

An interesting discovery is that the areas where water ice spectral signatures have been noted match the bright red colors in recently gathered color images.

“I’m surprised that this water ice is so red. We don’t yet understand the relationship between water ice and the reddish tholin colorants on Pluto's surface,” says Silvia Protopapa, a science team member from the University of Maryland, College Park.