The Government of Haiti has officially issued an alert on the critical food insecurity situation in the country caused by the prolonged drought exacerbated by the influence of El Nino weather phenomena.

The poorest of Haiti population are kept in food crisis due to drought-related conditions and about 3 million people are estimated to live in food insecurity, according to United Nations Office for the Coordination of Humanitarian Affairs (OCHA). Drought-stricken grounds have suffered significant crop losses and consequently, a 50% drop in agricultural production was reported for the period between July and December 2015, National Food Security Coordination (CNSA) reported in August 2015. 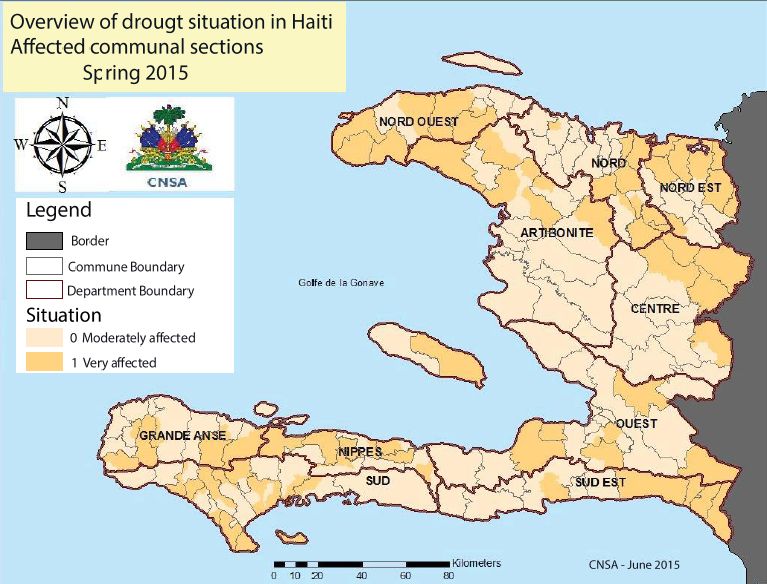 A map of drought situation in Haiti by each affected communal section. Image credit: CNSA

The South, North-West, Northern Artibonite and South East are the worst affected areas in the country.

In general the rainy and hurricane seasons in Haiti extend from March to November, however they were somewhat irregular this year, as they came in on a late start, over 40 days later than expected in the North East, Artibonite and parts of the Southeast. On average the wettest month of the year, May, has experienced deficits in precipitation ranging between 100 to 200 mm (3.9 to 7.9 inches) across the largest part of the country. Departments of South and Grand Anse reported a 300 mm (12 inches) rain deficit of rain in 2015.

The prognosis doesn't look good, as the situation is expected to deteriorate over the next couple of months, until May or June 2016. The number of people affected by the food crisis is still expected to rise and exceed the current 30% of Haiti's population.

UNICEF and INGOs are planning to launch a Rapid SMART evaluation in 20 municipalities severely affected by drought. Additional support and funds will be needed to roll out the rapid evaluation in the remaining most drought affected areas.