NASA's scientists have produced a mosaic of all the highest-resolution images of Pluto collected by the New Horizons spacecraft. The collection of images with a resolution of about 80 m (260 feet) per pixel now extends across the planet's hemisphere that faced the spacecraft as it flew by Pluto on July 14, 2015. The new highly detailed view provides both the scientists and the public with a glimpse into a rich variety of the planet's terrain and the processes that shaped it.

The mosaic strip shows the Pluto's limb and almost extends all the way to the terminator line, dividing the day and night time in the southeast of the encounter hemisphere. The strip is approximately 90 km (55 miles) wide at its northern end and 75 km (45 miles) at its southern end. The view looks at the surface horizontally at the northern end and straight into the surface on the southern end. 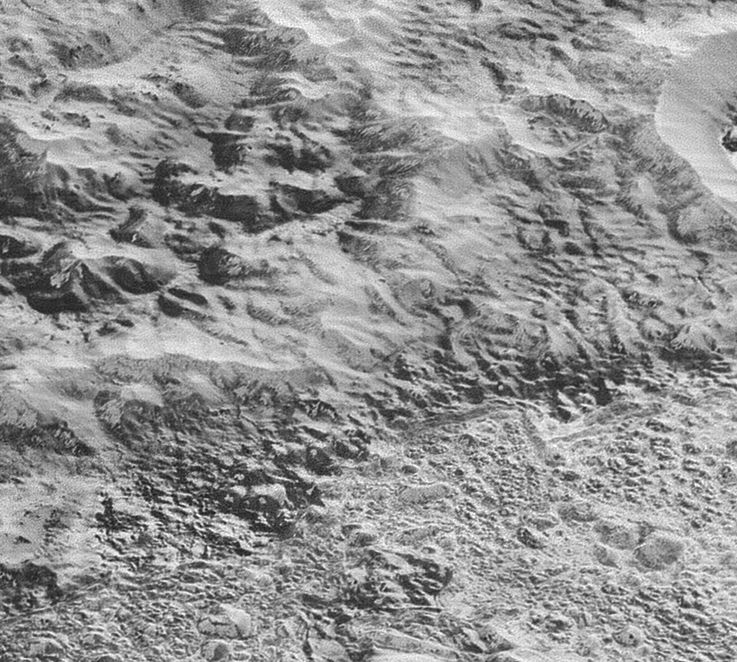 A zoom-in of the mosaic strip patch. Image credit: NASA/JHUAPL/SwRI

The video below shows numerous different landscapes of the planet, moving the mosaic from top to bottom. At the top, it shows the hummocky, cratered terrain, and extends across the parallel ridges of "washboard" terrain, mountain ranges, cellular plains, coarsely "pitted" areas of sublimating nitrogen ice, areas of thin nitrogen ice to the dark mountainous, scarred highlands.

This mosaic strip – extending across the hemisphere that faced the New Horizons spacecraft as it flew past Pluto on July 14, 2015 – now includes all of the highest-resolution images taken by the NASA probe. Note: video is silent/no audio. Image credit: NASA/JHUAPL/SwRI

The images were collected about 15 850 km (9 850 miles) from Pluto, 23 minutes before the spacecraft reached the point of closest approach, by the New Horizons' Long Range Reconnaissance Imager (LORRI).

“This new image product is just magnetic. It makes me want to go back on another mission to Pluto and get high-resolution images like these across the entire surface,” concluded Alan Stern, New Horizons principal investigator from the Southwest Research Institute in Boulder, Colorado.