Hungarian physicists have detected an anomaly in radioactive decay which may imply the existence of another, so far unknown, fundamental force of nature. The research results indicate a new, light boson, 34 times heavier than the electron particles may exist. The discovery has been met with both skepticism and excitement from the scientific community. Further experiments will be necessary to corroborate the particle's existence, but experts predict it will either be confirmed or rebutted within a year.

The discovery was first reported by Attila Krasznahorkay and his colleagues at the Hungarian Academy of Sciences's Institute for Nuclear Research in Debrecen, Hungary in 2015, but didn't attract the attention until the group of US scientists published their study on April 25, 2016. Their research confirmed the data wasn't in conflict with any previous experiments, and the discovery may, indeed, be a signature of the fifth fundamental force.

The results were discussed at the SLAC National Accelerator Laboratory's workshop in Menlo Park, California. Numerous researchers were skeptical about the findings, but excited, too. Research groups in Europe and US said more research is necessary in order to replicate and investigate the results and have announced the discovery should be confirmed or rebut within about a year.

Four known fundamental forces of physics are gravity, electromagnetism, the strong and weak nuclear force. Because the standard model of particle physics seemed to be unable to explain the dark matter, a substance which, according to scientists, makes up over 80% of the Universe's mass, the scientists have begun to look for another fundamental force. Theoretical physicists have proposed a variety of exotic force-carrier particles so far, the so-called dark photons being one of them.

According to Krasznahorkay, his group was looking for such photon. The research team fired photons at thin targets of lithium-7. This resulted in creating an unstable berylium-8 nuclei which decayed afterward, spitting out pairs of electrons and positrons. The standard model predicted the number of observed pairs drops down as the angle separating the trajectory of the electron and positron goes up. However, results showed the number of such emissions jumped at an angle of 140° before the values started to fall down again at higher angles.

The scientists think this bump presents a strong evidence that a minute fraction of the unstable beryllium-8 nuclei shed their excess energy in the form of a new particle which decays into an electron-positron pair afterward. According to his team's calculations, the mass of this particle should be about 17 MeV. 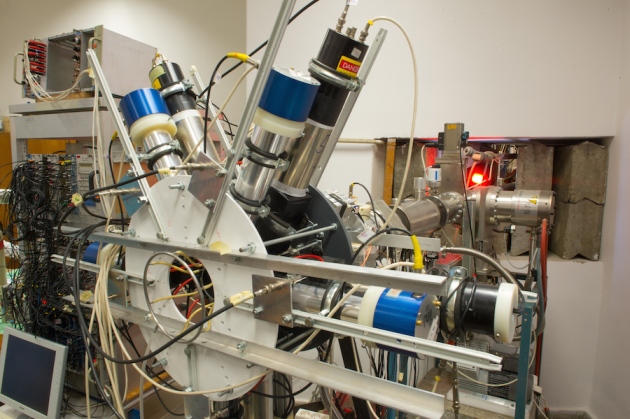 Physicists at the Institute for Nuclear Research in Debrecen, Hungary, say the electron-positron spectrometer shown in the photo has found evidence for a new particle. Image credit: MTA-Atomki

“We are very confident about our experimental results,” said Krasznahorkay. He explained his research team performed the test several times over the last three years and eliminated all possible error sources. Hence, the chances of such anomalous occurrence if nothing unusual was going on are 1 in 200 billion.

According to the US scientists, however, the particle in question is not a dark photon. Instead, their analysis showed it may, instead, be a so-called "protophobis X boson", which would carry an extremely short-range force, acting over distances only several times the width of atomic nuclei.

Jesse Thaler, a theoretical physicist at the Massachusetts Institute of Technology (MIT) in Cambridge, said that the unconventional coupling makes him skeptical about the new particle's existence: “It certainly isn’t the first thing I would have written down if I were allowed to augment the standard model at will.” However, he did also stress that the proposal did get his attention: “Perhaps we are seeing our first glimpse into physics beyond the visible Universe.”

The existence of the new particle should be either confirmed or rebutted within one years' time. The DarkLight experiment at the Jefferson Laboratory, designed to look for dark photons of masses between 10 and 100 MeV, will engage in targeting the 17 MeV region, as a priority. Also, the LHCb experiment at CERN, Europe will engage in a search for the proposed boson. The two experiments that will also fire positrons at the target are the INFN Frascati National Laboratory near Rome, expected to start working in 2018, and the one at the Budker Institute of Nuclear Physics in the Novosibirsk, Russia.

Rouven Essig, a physicist at Stony Brook University in New York, stated the particles' "somewhat unexpected" properties may make it hard to confirm its existence. However, the thinks the experiments should definitely be done: “It would be crazy not to do another experiment to check this result. Nature has surprised us before!”