Researchers from China and United Kingdom have introduced a new hypothesis about the tectonic evolution of the greater western Pacific since the Mesozoic era, which shows that the basement of the Chinese continental shelf is geologically unrelated to the continental lithosphere of eastern China. The new research was published online in Science Bulletin on September 11, 2015.

The scientists from Institute of Oceanology, China University of Geosciences, Chinese Academy of Sciences, Lanzhou University and Durham University in UK have analyzed the distribution of Jurassic-Cretaceous granitoids throughout the entire eastern continental China, and have reached a conclusion that the Chinese continental shelf is of exotic origin.

The massive shelf with large compositional buoyancy looks like it could be either an oceanic plateau or a micro continent, transported by, or along, the paleo-Pacific plate in Mesozoic. The shelf was moving in the northwest direction and subducting beneath the eastern margin of the continental China. 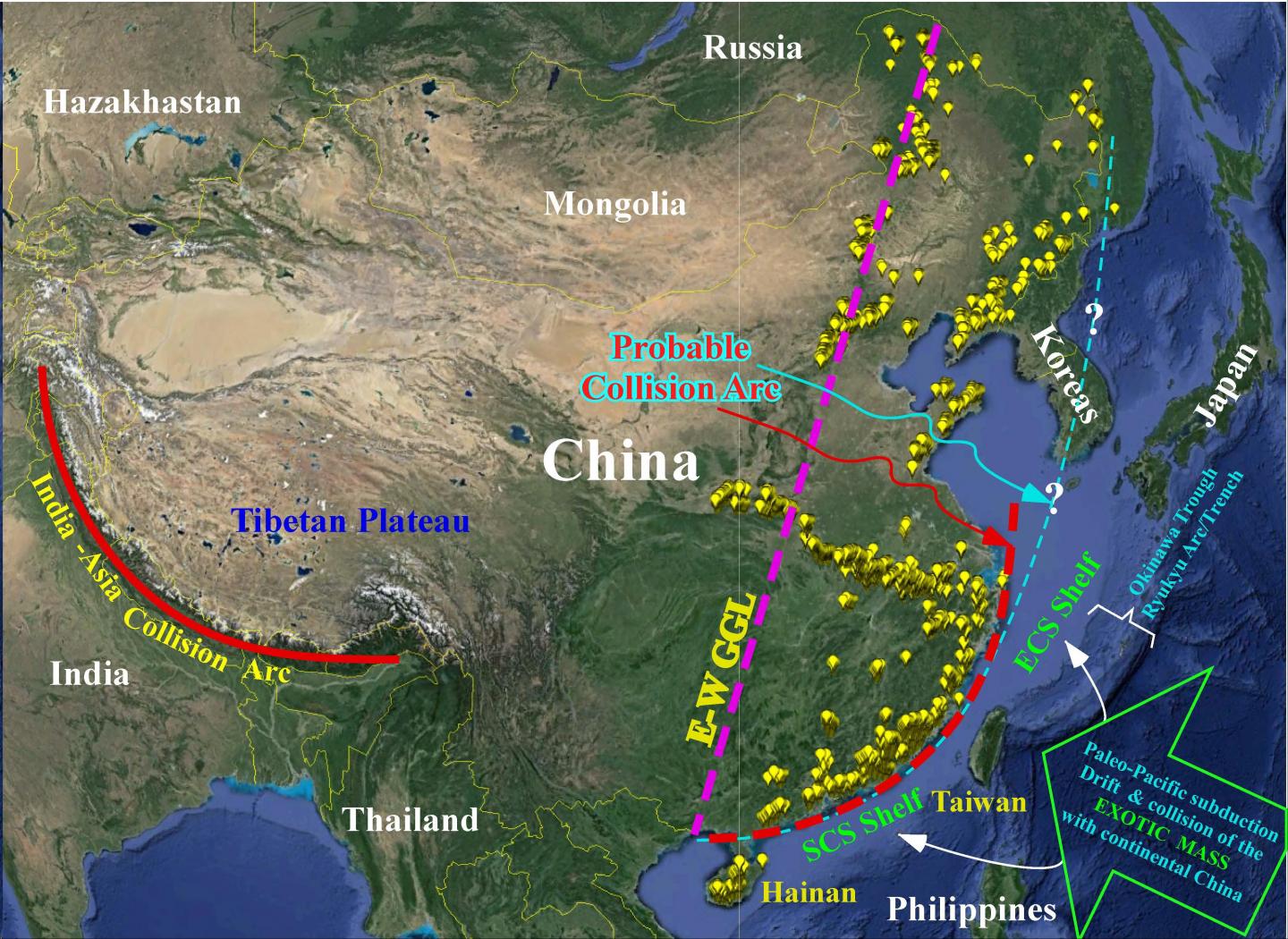 The continental China and its adjacent land and seas illustrating: (1) the Chinese continental shelf (basement of the East and South China Seas) to be of exotic origin; (2) arrival of the buoyant and unsubductable oceanic plateau or micro-continent at the trench jammed the trench at ~ 100 Ma; (3) the jammed trench location is shown in red dashed curve along the southeast coast of continental China, although unclear in the north, as indicated by the dashed light blue curve with question marks; (4) The yellow "drop" dots are granitoid sample locations. The thick dashed purple line labeled E-W GGL approximates the East-West Great Gradient Line topographically separating the plateau to the west from the low-land hilly plain to the east. Image credit: Yaoling et al, 2015.

Granitoid magmatism that terminated at about 88 Ma (Mega annum, 1 Ma equals 1 million years) shows subduction was likely to cease at that time, or before, probably at about 100 Ma. The subduction process could only have been stopped if the trench was jammed by a sizable physically unsubductable and compositionally buoyant terrain.

The Chinese continental shelf is thought to be such an unsubductable mass that collided with the eastern margin of the continental China and jammed the trench at about 100 Ma.

This trench jam has caused the Pacific plate to change its course of motion to north-northwestward and to subduct beneath the Kamchatka and western Aleutian trenches. This re-orientation of the Pacific plate has produced a transform boundary between the Pacific plate and the newly accreted eastern Asian continental plate.

The new understanding of the origin of the Chinese continental shelf could explain the 40 Ma time gap in subduction related magmatism in the greater region of western Pacific.

To further explore the hypothesis additional basement penetration drilling will be required, on specifically chosen sites of the shelf. The research is expected to make a significant contribution to a genuine understanding of the tectonic evolution of the greater Pacific since the Mesozoic era as well as provide a broad global tectonic context.

Featured image: The continental China and its adjacent land and seas illustrating the Chinese continental shelf to be of exotic origin Image credit: Yaoling et al, 2015.