A new tropical storm named "Dujuan" (known as Jenny in the Philippines) formed in the western Pacific on September 22, 2015. The Joint Typhoon Warning Center (JTWC) expects the storm to intensify to a typhoon category over the next 48 hours, and although no coastal watches or warnings are currently in effect, this new, fierce system will require detailed monitoring as it nears the coasts of Philippines and Japan.

Tropical Depression "21W" developed in western Pacific on September 21, west-northwest of Guam and intensified to a tropical storm on September 22.

Dujuan entered the Philippine area of responsibility and was named Jenny on September 23 at 10:00 UTC. Philippine Atmospheric, Geophysical and Astronomical Services Administration (PAGASA) forecasted a moderate to heavy rainfall extending 800 km (497 miles) in the tropical storm diameter, as the center of the storm was located approximately 1 375 km (854 miles) east of Itbayat, Batanes at 09:00 UTC, today. 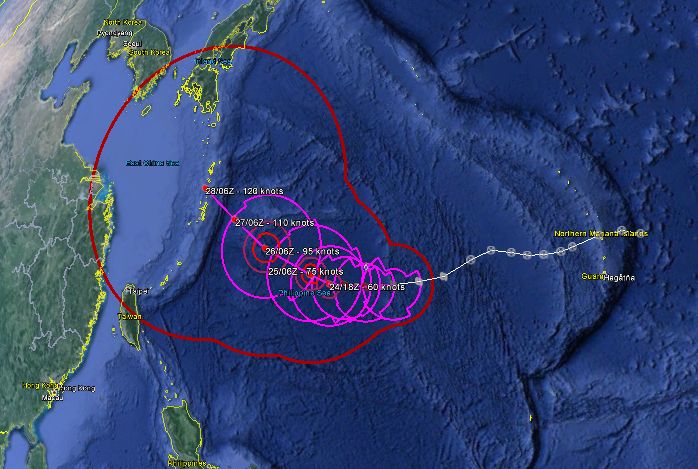 Fisherman have been advised not to move over the eastern seaboards of Visayas and Mindanao. Although no public storm warning signal has been issued at this point, the public and the disaster risk reduction and management council have been advised to take appropriate precaution measures and watch out for the further development.

Over the next 48 hours Tropical Storm "Dujuan" is expected to travel northwestward and intensify to a typhoon while passing north of Okinawa. JTWC forecasts maximum sustained winds reaching 138.9 km/h (86.3 mph) while wind speed gust will increase to 166.7 km/h (103.5 mph).

An exact forecast remains uncertain at this point as the storm still appears quite unorganized. The system will require careful monitoring as it approaches land.