Volcanic lightning creates whistlers, very low frequency electromagnetic waves, that propagate into the magnetosphere. In the July 2015 issue of Physics World magazine, science writer Ian Randall investigates how researchers are trying to use studies on these whistlers to elucidate the Earth's own plasmasphere, which will eventually help scientists get better at anticipating the impact of space weather events.

A whistler wave is a type of electromagnetic signal propagating in the Earth–ionosphere waveguide which may escape the ionosphere and propagate outward into the magnetosphere.

They were probably heard as early as 1886 on long telephone lines, but the clearest early description was by German physicist Heinrich Barkhausen in 1919.

At the height of the First World War, in the trenches, Barkhausen would secretly listen to Allied telephone conversations. Sometimes, the Allied communications were interrupted by some strange sounds, known to soldiers as "whistlers." Barkhausen concluded that these whistler waves were caused by an atmospheric phenomenon but the true source was not known before the 1950s,

In 1953, Storey showed that whistlers originate from lightning discharges. He interpreted Magnetospheric whistler waves as evidence of plasma around Earth. Whistler observations have subsequently been used to monitor the plasmapause location. Whistlers have also provided an indirect way to estimate plasmaspheric electric fields (Carpenter et al., 1972).This is because the whistler ducts move radially under the influence of the azimuthal electric field.

In the July 2015 issue of Physics World, the magazine featured weird natural phenomena. In the issue, Ian Randall, a science writer based in New Zealand, investigated how researchers are studying whistler waves triggered by volcanic lightning to explain the structure of the Earth's plasmasphere, which will eventually help scientists get better at anticipating the impact of space weather events.

Lightning creates bursts of very-low-frequency electro-magnetic waves known as atmospherics or "sferics" for short. These sferics sometimes penetrate the ionosphere and enter the plasmasphere. Here the sferics whiz between hemispheres through ducts of plasma and become whistler waves.

Analyzing the passage of the whistlers between the hemispheres, scientists now have the opportunity to investigate the plasmasphere without using expensive space probes. A better understanding of the plasmasphere can help scientists better anticipate the space weather events that may affect astronauts and both orbiting and ground based electronic systems.

Researchers need to feed in a few factors into their models to elucidate the plasmasphere. They must also know where each whistler enters and leaves. That is a great problem as whistlers can be created by lightning thousands of kilometers away.

However, a recording station in Dunedin on New Zealand's South Island provides a unique opportunity: its magnetic conjugate point lies in the Aleutian Islands, a volcanic chain of more than 40 volcanoes in the northern Pacific Ocean. Researchers looked at correlations between whistler data in this area and lightning data from prominent, high latitude volcanic eruptions in the Aleutian chain and found the first evidence that volcanoes are able to couple with the inner magnetosphere. 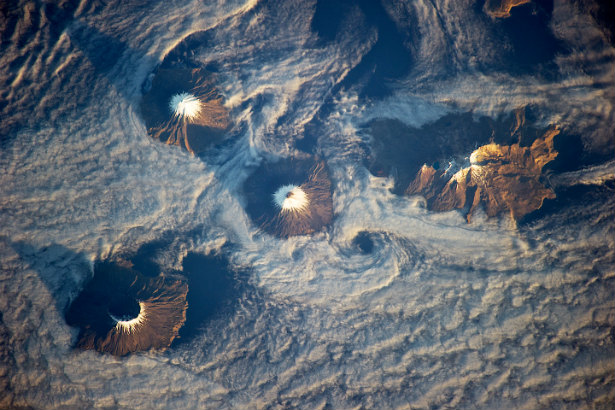 The Islands of the Four Mountains in Alaska’s Aleutian chain are seen in this photograph taken from the International Space Station (ISS). The islands are the upper slopes of volcanoes that rise from the sea floor. (Source: NASA Earth Observatory)

Although the whistler study was very much Earth centered, Mark Golkowski, a plasma-physics expert from the University of Colorado Denver, believes the research findings can have implications beyond our planet. The study may pave the way for elucidating many space weather events besides the plasmasphere of the Earth.