Tropical Storm "Chan-hom" formed last week east of Guam, passed through the Rota channel bringing heavy rain to both Guam and Rota islands and reached typhoon strength during the UTC afternoon of July 6, 2015. The system is expected to become a major typhoon on its way toward Miyako and Okinawa, Japan and mainland China.

During the early UTC hours of July 5, 2015, Chan-hom passed between Guam and Rota with maximum sustained winds between 83.3 to 92.6 km/h (51.7 to 57.5 mph) bringing heavy rain and causing significant damage to both islands. The storm then moved on toward the Northern Marianas Islands and mainland China.

Chan-hom is intensifying and is expected to resume WNW to NW trajectory and strengthen into a major typhoon with maximum sustained wind speeds of 240.7 km/h (149.6 miles) by July 9.

Forecast video by meteorologist Robert Speta of the WestPacWx.

The Atmospheric Infrared Sounder or AIRS instrument that flies aboard NASA's Aqua satellite gathered infrared temperature data on Chan-Hom when it was still a tropical storm on July 6 at 04:29 UTC.

The coldest thunderstorm cloud tops measured were near -63 Fahrenheit or -52 Celsius. Cloud top temperatures that cold are high into the troposphere and capable of generating heavy rain. 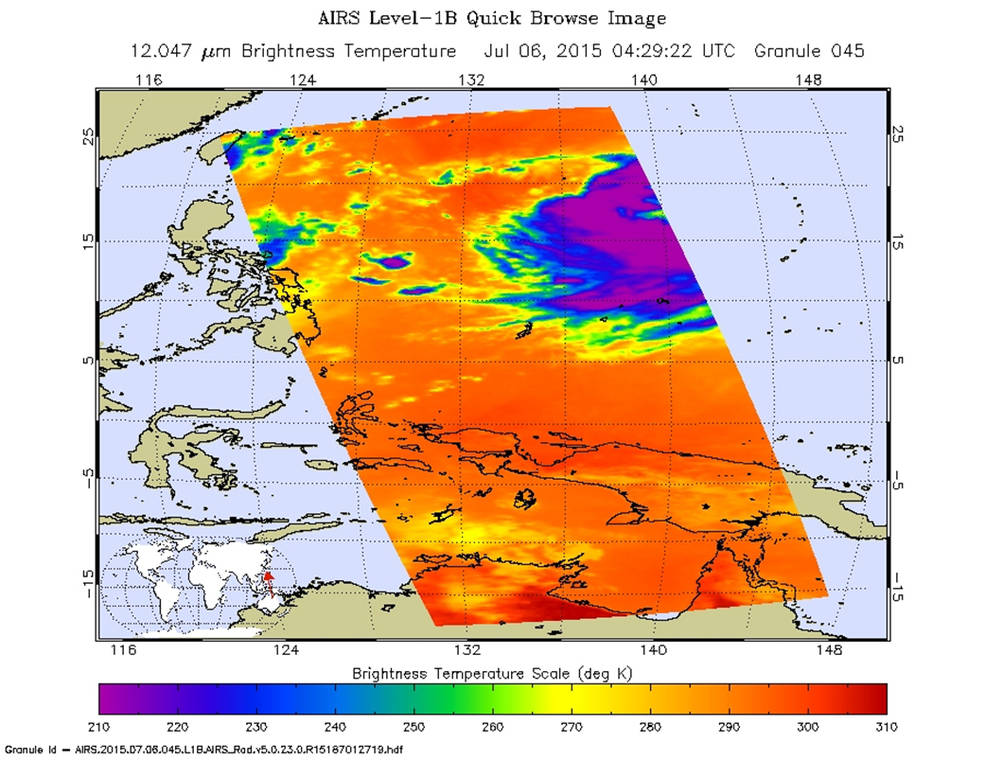 The JTWC forecasts the storm to continue to strengthen over the next three days and expected to peak as a Category 4 typhoon on the Saffir-Simpson Wind Scale, with maximum sustained winds nearing 240.8 km/h (149.6 mph). The storm is forecast to pass between Ishigakjima and Kadena islands on July 9 before making landfall in eastern China as a typhoon.