Satellite imagery from Japan's MTSAT and NOAA's GOES-West satellite show a total of 7 tropical systems over the North Pacific Ocean on July 5 and 6, 2015.

Meanwhile, 7-day rainfall accumulation data collected by GPM core observatory shows a very large area of rain stretching from the west coast of Mexico all the way to China and into Indian Ocean. In addition, Tropical Cyclone "Raquel", which formed north of Solomon Islands, South Pacific Ocean around 18:00 UTC on June 30, 2015 (04:00 AST on July 1), made history as first July tropical cyclone ever recorded off Australia's north-east.

With three tropical cyclones in the northwestern Pacific – Linfa, Chan-Hom and Nangka – 4 developing tropical lows were observed in the central and eastern Pacific.

While Linfa hit northern Philippines, weakened over the mainland, re-emerged over the South China Sea and is now again intensifying toward its July 9th landfall over southern Taiwan, Chan-hom has passed between Guam and Rota, moved toward Northern Marianas Islands and is now heading toward Ryuku Islands and mainland China. Chan-hom is expected to become a major typhoon by July 9, as well as Nangka by July 11.

System 96E, located SSE of Hawai, is expected to intensify into a tropical depression on July 7.

IR images below show them all on July 5 and 6, 2015. Find detailed reports and forecast tracks below.

Tropical Storm "Linfa" – known as Egay in the Philippines – passed over the northern Luzon and re-emerged over open waters between Luzon and Taiwan on July 5. The storm is now on its way toward Taiwan.

Landfall in southern Taiwan is expected on Thursday, July 9. 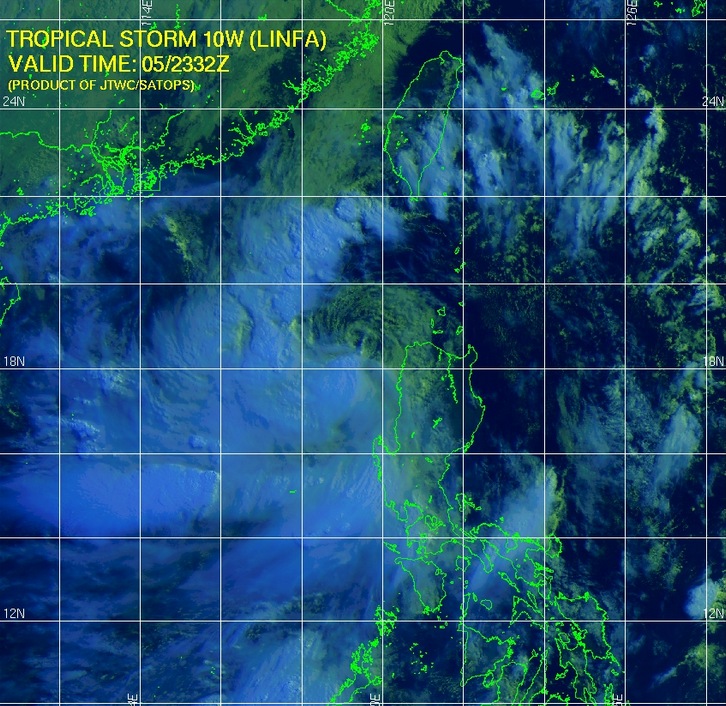 During the early UTC hours of July 5, 2015, Chan-hom passed between Guam and Rota with maximum sustained winds between 83.3 to 92.6 km/h (51.7 to 57.5 mph) bringing heavy rain and causing significant damage to both islands. The storm then moved on toward the Northern Marianas Islands and is now heading toward Ryuku Islands and mainland China.

Chan-Hom is intensifying and is expected to resume WNW to NW trajectory and reach typhoon strength on July 6 and then strengthen into a major typhoon with maximum sustained wind speeds of 240.7 km/h (149.6 miles) by July 9.

Nangka was approaching Ujelang on July 5 and after passing the island, the storm was expected to strengthen to typhoon-force. At 15:00 UTC on July 5, Nangka was centered about 58 km (36 miles) south of Enewetak. As a result, a typhoon warning was in force for Enewetak atoll. Nangka was moving to the west at 20 km/h (12.6 mph) with maximum sustained winds near 92.6 km/h (57.5 mph).

The system is expected to move west-northwest and steadily intensify to at least 222 km/h (138 mph) by July 11 when it is forecast to be south of Iwo To.

As of July 5, 2015, there are three tropical low pressure areas in the central Pacific and one in the eastern Pacific.

#1 – A weak low pressure area was located about 1 818 km (1130 miles) ESE of Hilo, Hawaii. Upper level winds are expected to remain unfavorable for development as this system moves slowly to the west during the next couple of days. This low pressure area has a 10% chance of developing into a tropical depression, NASA's Goddard Space Flight Center said.

#2 – An area of disturbed weather, associated with a weak low pressure area, was located about 1 255 km (780 miles) SSE of Hilo, Hawaii. The system was disorganized, but environmental conditions may become a little more favorable for some gradual development over the next couple of days while it remains nearly stationary. This low has a 20% chance for development into a depression.

#3 – Isolated thunderstorms continued to form in the vicinity of a weak low pressure area about 1 561 km (970 miles) southwest of Honolulu, Hawaii. Conditions are not expected to be conducive for development through Monday night. This low also has a 20% chance for development. 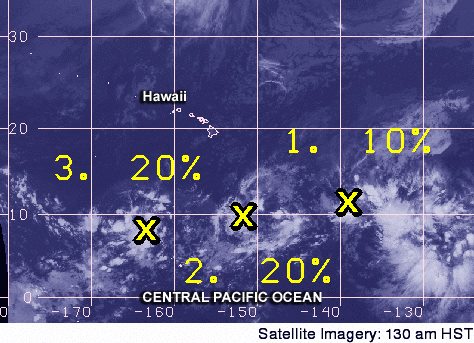 Showers and thunderstorms associated with the broad area of low pressure now called System 96E was centered about 2 333 km (1 450 miles) southwest of Cabo San Lucas, Mexico. A tropical depression is expected to form by mid-week while the system moves WNW at 8.6 to 15 km/h (10 to 15 mph).

The following image from NOAA's GOES-West satellite shows System 96E, and a glance at the quiet Gulf of Mexico (right) in the Atlantic basin. 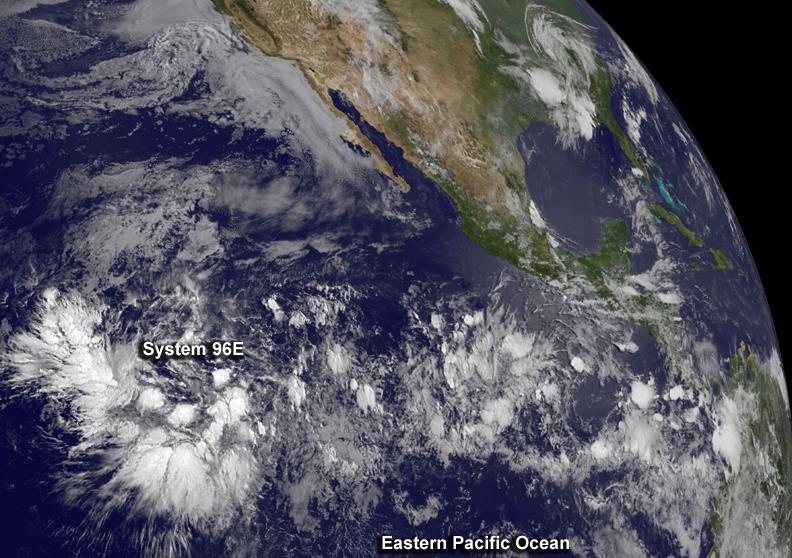 At 06:00 UTC on July 6, NHC noted shower and thunderstorm activity within the System 96E ​has increased over the past several hours and became more concentrated near the center of the low.

Environmental conditions are steadily becoming more conductive for development, and a tropical depression could form by Tuesday, July 7, while the system moves WNW at about 24 km/h (15 mph).

GPM core observatory image below shows 7-days of accumulated rainfall data. A large area of rain is stretching from the west coast of Mexico all the way to China and into Indian Ocean.