After about 7 months of hibernation on the surface of comet 67P/Churyumov-Gerasimenko, ESA's famous Philae probe finally recharged its batteries on June 13, 2015, enough to contact mission control. Philae probe, its Rosetta mothership and Comet 67P are about 305 million km away from Earth today. Perihelion, comet's closest approach to our star is expected in 58 days, around 02:00 UTC on August 13, 2015.

ESA made history last year with first-ever mission to soft-land a probe on a distant comet, but Philae's batteries soon depleted and without enough sunlight available to recharge, the probe automatically entered hibernation mode. Its connection to Rosetta and the mission control was cut off, but Rosetta maintained its orbit around the comet and kept gathering and transmitting data.

Philae managed to recharge enough to contact Earth on June 13. The signal arrived at 20:28 UTC and for 85 seconds Philae "spoke" with its team at the German Aerospace Center (DLR) via Rosetta, ESA reports.

"We have also received historical data – so far, however, the lander had not been able to contact us earlier," explains DLR Philae Project Manager Dr. Stephan Ulamec.

"Philae is doing very well: It has an operating temperature of -35ºC and has 24 Watts available. The lander is ready for operations."

There are still more than 8000 data packets in Philae’s mass memory which will give the DLR team information on what happened to the lander in the past few days on the comet.

While Rosetta and Philae teams continue to search for the current location of the lander, piecing together clues from its unexpected flight over the surface of Comet 67P/Churyumov-Gerasimenko after its initial landing on November 12, 2014, the scientists are waiting for the next contact.

The movie above shows a zoom into a December 13, 2014 OSIRIS narrow-angle camera (NAC) image taken from a distance of about 20 km from the centre of comet 67P/Churyumov-Gerasimenko.

A large number of bright spots are seen: as only one (at most) of them could be Philae, the majority must be associated with surface features on the comet nucleus. The movie ends on a promising candidate located just outside the CONSERT error ellipse (marked): this candidate was not seen in October 22, 2014 images, but appears in images taken on both December 12 and 13, 2014.

Philae shut down on November 15, 2014 at 0:15 UTC after being in operation on the comet for about 60 hours. Since March 12, 2015 the communication unit on orbiter Rosetta was turned on to listen out for the lander. 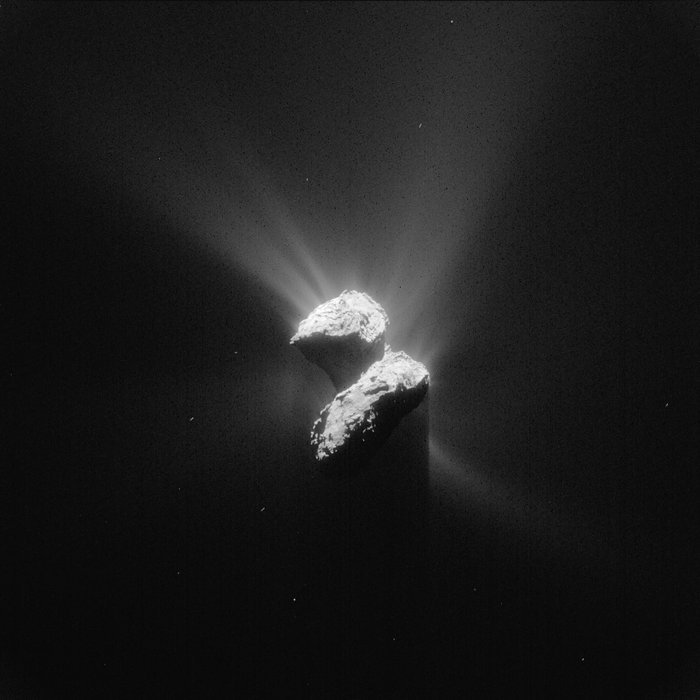 This single frame Rosetta navigation camera image of Comet 67P/Churyumov-Gerasimenko was taken on June 5, 2015 from a distance of 208 km from the comet center. The image has a resolution of 17.7 m/pixel and measures 18.1 km across. Credit: ESA/Rosetta/NavCam.

Both Rosetta and Philae will accompany the comet through perihelion on August 13, 2015 until the nominal end of the mission.