On July 29, 2015, Rosetta’s OSIRIS camera captured images showing a dramatic outburst at Comet 67P/Churyumov–Gerasimenko, registered by several of its instruments from their vantage point 186 km (115 miles) from the comet.

As forecasted, the comet reaches perihelion at 02:03 UTC on Thursday, August 13, 2015, the moment in its 6.5 year orbit when it is closest to the Sun. This period is scientifically very important, as the intensity of the sunlight increases and parts of the comet previously cast in years of darkness are flooded with sunlight. Although the comet’s general activity is expected to peak in the weeks following perihelion, much as the hottest days of summer usually come after the longest days, sudden and unpredictable outbursts can occur at any time – as already seen earlier in the mission.

As the comet was approaching perihelion, Rosetta has been observing growing activity. However, the outburst captured on July 29 was something that occurred earlier than the scientists had expected.

The event was first observed in an image taken at 13:24 UTC on July 29, 2015. There was no outburst in an image taken 18 minutes earlier and also it faded away in an image captured 18 minutes later. The camera team estimates the material in the jet to be traveling at 10 m/s at least, and perhaps much faster. “This is the brightest jet we’ve seen so far,” comments Carsten Güttler, OSIRIS team member at the Max Planck Institute for Solar System Research in Göttingen, Germany. “Usually, the jets are quite faint compared to the nucleus and we need to stretch the contrast of the images to make them visible – but this one is brighter than the nucleus.”

In the recent months, increased solar radiation has been warming the comet’s frozen ices, turning them to gas, which pours out into space, dragging dust along with it. Such vaporization of ice results in packets of gas either through an existing vent or hole or by breaking through the porous crust and erupting geyser-like into space. 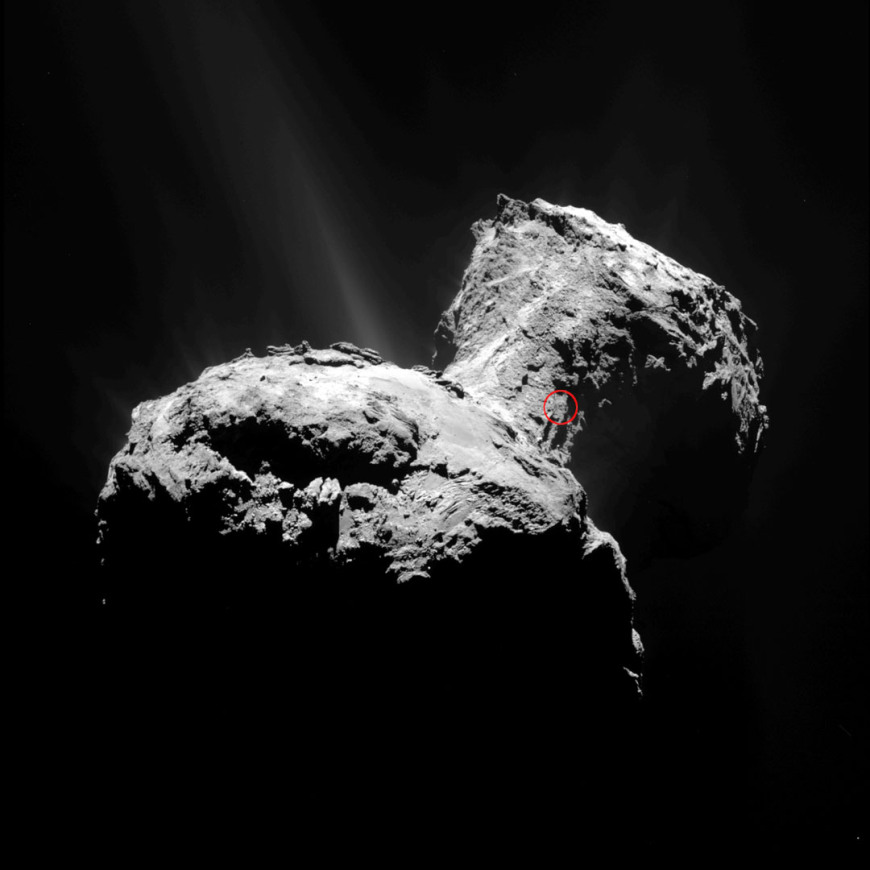 The red circle shows the location of the July 29, 2015 outburst on 67P/C-G. Credit: ESA/Rosetta/MPS for OSIRIS Team MPS/UPD/LAM/IAA/SSO/INTA/UPM/DASP/IDA.

Though such outbursts were expected, scientists didn’t expect it to be so intense. Normally, Rosetta would have to overexpose the comet’s nucleus to reveal the faint jets, but not this one. It was so intense that it managed to push away solar wind magnetic field from the nucleus as observed by Rosetta’s magnetometer.

Instruments on-board Rosetta witnessed a change in the structure and composition of the gaseous coma environment surrounding Rosetta, and detected increased levels of dust impacts. Compared to measurements made two days earlier, carbon dioxide increased by a factor of two, methane by four, and hydrogen sulphide by seven, while the amount of water stayed almost constant. In early July, Rosetta recorded and average of 1-3 dust hits a day, but 14 hours after the event, the number went up to 30 with a peak of 70 hits in one 4-hour period on August 1.

Everyone is looking forward to the perihelion. During and right after the perihelion, more dramatic activities are expected from the comet. However, this sudden outbursts shows how a comet’s activity can change dramatically as it approaches the closest point to the Sun.

Featured image: Rosetta’s scientific camera OSIRIS shows the sudden onset of a well-defined jet-like feature emerging from the side of the comet’s neck, in the Anuket region on July 29, 2015. Credit: ESA.